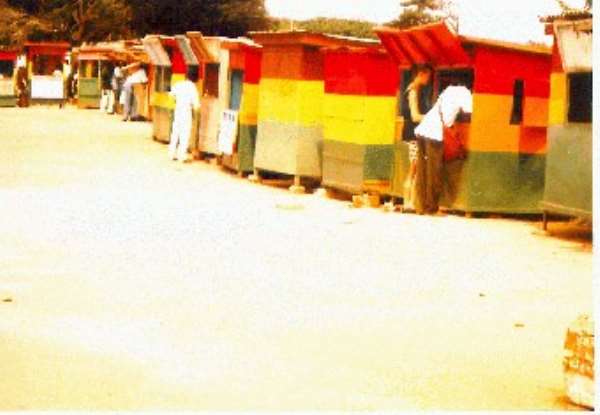 Koforidua -- Armed robbers have once again changed their tactics of robbing homes and operating on highways to robbing lotto operators.

The Chronicle investigations revealed that suspected armed robbers pretend they are regular customers coming to stake lotto, and while waiting to collect the coupons, they pull out a gun, rob the operators and run away.

It came out also that other suspected robbers pose as men of the security service in plain clothes, threaten the operators with an arrest and then seize all their (money) sales.

An eyewitness (name withheld) told The Chronicle how a lotto operator at Koforidua 205 fell victim to this new tactic adopted by the robbers.

According to him, the lotto operator was in his kiosk when three gentlemen in plain clothes claiming they were police officers, approached and issued a threat of arrest against him.

With an AK 47 rifle pointed at his mouth, they ordered him to collect his lotto coupons with the money realised from the sale of the coupons and follow them to a nearby police station, which he did.

The eye witness said, when they got to a quiet and busy area, the operator was ordered to hand over his sales, which they took and bolted.

Another armed gang with the same modus operandi attempted to rob another operator at Trom, a suburb of Koforidua, over the weekend but luck was not on its side.

This reporter learnt that the operator was having a rest under a tree, after sitting in his kiosk for a long time, when all of a sudden, he was attacked by the suspects wielding an AK 47 rifle.

They asked for the whereabouts of the lotto operator, not realising he was the one, and he quickly foiled their plan by saying he was also a customer waiting to stake lotto.

He managed to ward the suspects off by passing uncomplimentary comments about the 'missing operator' for not taking his business serious by leaving the kiosk.

Further investigations revealed that armed robbers were still robbing homes, drivers and travelers on the highways and other routes plied by travelers.

Both commercial drivers and travelers on the Koforidua to Accra via Akuapem Larteh-Dodowa road have reported series of attacks suffered on the route in recent times.

They appealed to the Eastern Regional police command to beef up security on the route to curb the activities of the armed robbers and make their journeys safe and comfortable.

When contacted, the Deputy Eastern Regional Police Commander, ACP Hamidu Mahama, said no information had reached them about the armed robbers' changing tactics.

He urged the general public not to hesitate in informing them any time there was a threat, so they could take swift action which would result in the arrest of the robbers.

ACP Hamidu Mahama hinted that the service had increased their patrol teams and expanded their intelligence gathering network, coupled with some other measures, which could not be disclosed for security and tactical reasons.

"The regional police command is in constant touch with the national headquarters operations unit to ensure the safety of travelers on the highways in the region," he assured.