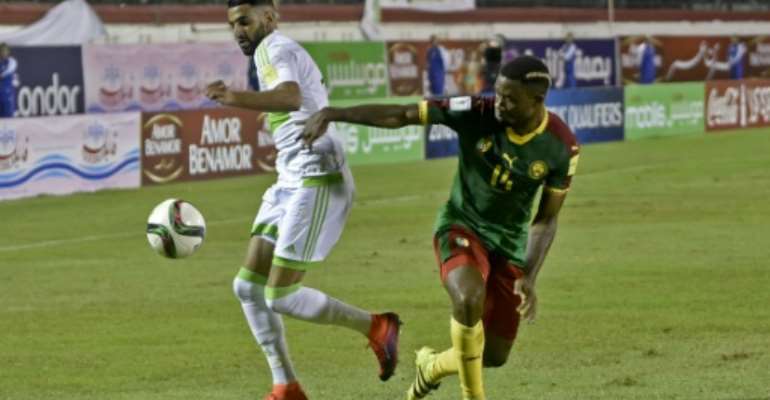 Algeria's Riyad Mahrez (L) fights for the ball with Cameroon's Aurelien Chedjou during their FIFA World Cup 2018 qualifying match at Stade Tchakert in Blida, on October 9, 2016. By RYAD KRAMDI (AFP/File)

Sarcelles (France) (AFP) - Riyad Mahrez chose to play for Algeria rather than France, where he was born, in a tribute to his late father, the African player of the year's brother said.

Propelled to global renown by Leicester City's amazing run to Premier League glory, the 25-year-old will be one of the most watched stars at the Cup of African Nations where Algeria start against Zimbabwe on Sunday.

Once considered too small for professional football, he will be one of the biggest names at the tournament in Gabon.

Three years ago, Mahrez was making his debut for Leicester in England's second tier Championship having played for Sarcelles, the French town where he was born.

He only made his debut for Algeria in May 2014 a few months after declaring that he wanted to play for the African nation around the same time as serious riots in Sarcelles.

At just 1.78 metres (5 feet 10 inches) and a sinewy 70 kilos (154 pounds) nobody at Sarcelles imagined he could soar to such heady prodessional heights.

At the age of 18, Mahrez was "frustrated" but determined when many of his Sarcelles teammates had signed professional terms, according to Hayel Mbemba, a teaching assistant at Chantereine school in the Paris suburb where Mahrez was a pupil. 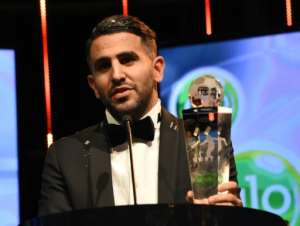 Algerian and Leicester forward Riyad Mahrez holds his trophy after being crowned African Footballer of the Year, in Abuja, on January 5, 2017

"Despite all that, Riyad swore on his life and that of his mother, that one day he would be a professional. At that time we were pessimistic.

"Today, he has made it and you can only give him respect for that."

His hunger only grew when his father, one of his biggest supporters, died suddenly in 2006.

"It gave him the force," said elder brother Wahid. "He really did it for him, for me, the family."

When Mahrez chose to play for Algeria over France, "it was for his papa," added the 30-year-old.

A childhood friend, Sofiane Seghiri, 26, said that Mahrez always had a ball at his feet.

"When you are 16-to-18 you want to go out, have fun with friends, maybe see some girls. He always had a ball," said Seghiri, laughing.

"That is why he is unique."

Mahrez first had an unsuccessful trial in Scotland, then played with Quimper in the French lower leagues and Le Havre in the second division where he was spotted by Leicester.

In the English second division it was tough for Mahrez to adapt his free dribbling game to the weekly confrontations with hard-ground defenders.

But since Leicester's fairy tale title win last year, he has been named Premier League player of the season, came seventh in the race for the Ballon d'Or and last week was named Africa's player of the year.

He has left a big impact at Sarcelles where scouts from foreign teams are now regular visitors in the poor suburb north of Paris.

"It may be the Mahrez effect that has brought the English scouts here. Two have gone to English clubs and there will be more," said Faysal Abdelwahbi, a childhood friend and coach of the under 12 team at AAS Sarcelles.

There are plenty in the youth teams who have now become left-footers. Many can recall every Mahrez nutmeg in the Premier League.

"It all started here, everything that the English defenders are putting up with, we also suffered," said Abdelwahbi.

"For a guy from Sarcelles to shine on the world stage makes us verey proud," said Sarcelles senior coach Mohamed Coulibaly.

"It is good for the town after all the things that you hear, the stigma that it puts up with."