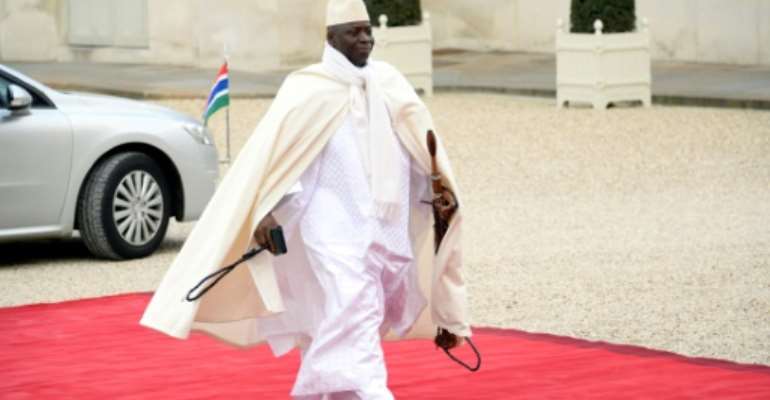 In 2015 the manager of Gambian independent radio station Teranga FM was slapped with sedition and "publication of false news" charges for privately sharing a provocative photo of President Yahya Jammeh, seen in 2013. By ALAIN JOCARD (AFP/File)

The station, which translates news from Gambian papers into local languages, has previously been silenced and in 2015 its manager was slapped with sedition and "publication of false news" charges for privately sharing a provocative photo of President Yahya Jammeh.

"Four National Intelligence Agency operatives and one police officer in uniform came to the radio station this afternoon (Sunday) around 2:30 pm and told us to stop broadcasting," a staff member told AFP on condition of anonymity.

A security source said no one had been arrested but could not say why the radio station was ordered off the air.

"We only asked them to stop broadcasting and they cooperated with us. They have stopped broadcasting since in the afternoon," the source told AFP.

The radio station was not broadcasting Sunday evening, according to an AFP correspondent.

Station manager Alagie Ceesay was arrested by the country's secret police in July 2015 on charges of sedition and "publication of false news" relating to allegations that he distributed images by mobile phone of a gun pointed at a picture of Jammeh.

Ceesay escaped from hospital where he was being treated in mid-April last year while on trial for sedition.

Jammeh, who has ruled the small west African country with an iron fist since taking power in a bloodless coup in 1994, lost December's presidential election but has rejected the results and filed a court challenge.

He is regularly accused of rights abuses and repression of the media.

The Gambia ranked 145 out of 180 countries in Reporters Without Borders' 2016 World Press Freedom Index, pointing to "a climate of terror around anything remotely to do with journalism".