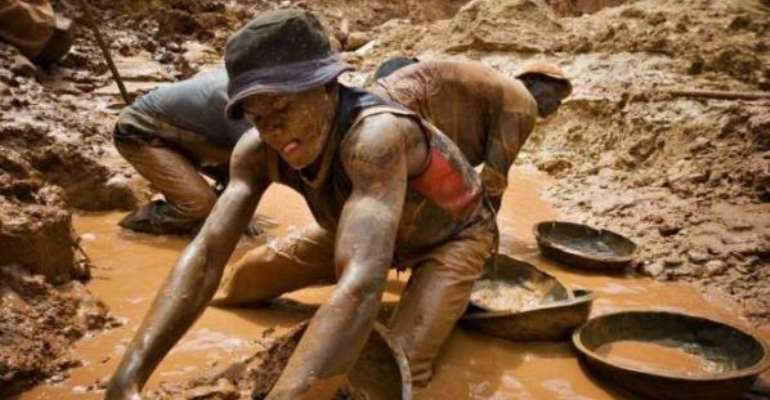 Dear Nana Addo,
I join the over 5 million Ghanaians who voted for you on December 7 to congratulate you on your historic victory.

Your win margin has never been witnessed in our presidential history. It's been a deserving third time victory.

For some of us, it's a new opportunity for Ghana to see new approach at solving the many social, economic and environmental challenges confronting the country.

We believe also your assurance that you are not in to amass wealth for yourself and your cronies, but to fix and elevate the status of the country.

Nana, I am a broadcast journalist working with Citi 97.3fm. I am based in the Western Region. In the past month, we committed ourselves at speaking on the perils of both small scale mining and galamsey on our lives and environment.

We committed ourselves to production of series of on-air and online reports, aimed at bringing to the doorstep of power, the magnitude of devastation of galamsey.

I have had the opportunity to travel both by air and land to galamsey ridden areas in the three Wassa Amenfi constituencies of the region and in some parts of the Prestea Huni Valley Constituency.

The story goes beyond what I can write to picture the situation to you. Simply put, there is a mad rush for alluvial gold and other minerals.

As a result, historical rivers we inherited from past sons and daughters of our land have been abused. it will supprise you Nana, to notice that, not a single major river in the Western Part of the country is not polluted.

Nana, I believe you must work, but in a responsible manner.

Nana, you know small scale mining did not start today. Our people were doing it before Chinese nationals “invaded” the industry.

When they came, they succeeded in convincing our people that, no matter where gold is found, being it cocoa farms, forest reserves, backyard farms, marshy areas suitable for rice cultivation, sacred areas, and sadly, ancient river bodies like Prah, Ankobra and those in Kibi etc, mine it. That is what they have successfully planted in our people.

Of course, our people fell for it because of the instant and large sums of revenues “their technology” brought, compared to days earlier. But their technology is environmentally disrespecting that one can only understand and comment appropriately after travelling to either Wassa Amenfi East or west districts or Kibi.

In all of this, our people were moderately and responsibly exploiting the resource in harmony with the environmental regulations, at least some decades ago.

Still on the Chinese, Nana, when you go to Wassa Akropong today, the capital of Wassa Amenfi East, it's a shame. There is a whole new country Chinese are building. There is Chinese vegetable market, Chinese Filling station, Chinese small scale mining shops doing retailing, Chinese exclusive hospital, Chinese community, Chinese restaurant, Chinese Casinos, everything China. Problem with it is that, it is crushing our local folks who do not have the means to survive in such a high cost environment. This in the end forces many of the people in these areas to end up in the pit to meet up.

In this direction, I respectfully request you Mr. President, to ban these Chinese from engaging in small scale mining and galamsey. If it is possible, deport all of them with immediate effect.

When they are gone, declare some areas no go zone for mining. While at that, let experts identify areas suitable for small scale mining for the youth who will want to go into it. Let them have a clear boundary. They could even be trained to make the best out of their operations.

In fact, you will need to be very firm on this because, people you trust may be involved. Be firm Nana!

Gold or our river bodies?

Nana, I know you that it isn't in our era that gold was found in rivers in Ghana. So were our forefathers. In fact, our forefathers knew of alluvial gold presence in these rivers over 200 years ago. However, weighing the importance of keeping the river in its natural state led them to safeguard the river.

The Pra River alone supply the over 2,000 communities dotted along it with sure source of fish.

The prawns, the crab, the mud fish, the shrimps, name them; are all gone in our minds as if they were centuries ago. But, in truth, it's less than a decade.

Wrong approach at combating galamsey
The John Mahama led administration used military men and other task force in its attempt to “allegedly” fight the menace. Truth is, apart from the needless deaths that characterized the operations; some of the personnel were compromised. In the end, the menace has resurface in full strength.

Nana, we found out that, those polluting the rivers use the Changfan which is made locally or imported from China.

These equipment, Nana, are owned by people in the community, and community members know who these persons are.

So, instead of chasing these poor boys who are working for big names in communities to their death, why not use competent BNI officers in each district to identify owners of the equipment and confiscate their equipment? Besides, you can criminalize the use of Changfan and subsequently ban its importation.

Reform the Minerals Commission
If there is anything that disappointed me during our reports, it is when an officer at the Minerals Commission told me in the face that they will continue issuing license to people despite the impunity with which those they had already given license were abusing the environment.

I have documents authorizing mining companies into forest reserves. The Minerals Commission, apart from failing to put brakes on issuing out new licenses, has also failed in whipping in line mining companies which flout its operational regulations.

Nana, specifically to the three Amenfi districts in the Western Region, it was heartbreaking to hear Minerals Commission say it will continue giving permits. I think the impunity is too much that you need to look into. I believe the devastation has reached its peak and needs to be stopped or highly regulated.

Yes Nana, they cannot be trusted. The Chanfans travel through several police checkpoints before it gets to its destination. Yet police officers will be same persons to want to go and chase them in the bush. One of the failures of the outgoing administration was when it knew that DCEs, District police commanders, MPs and chiefs were owners of Changfans but failed to arrest a single one of them. Yes, they all had legitimate license to operate, yet galamsey is rampant. They gave reports that suggested they were on top of issues. So Nana, watch these stakeholders. Watch their move and scrutinize what they say Mr. President.

That said, I will end here and hope you have the best of strength to execute what you intend to do for Ghana. Congratulations for winning Nana.