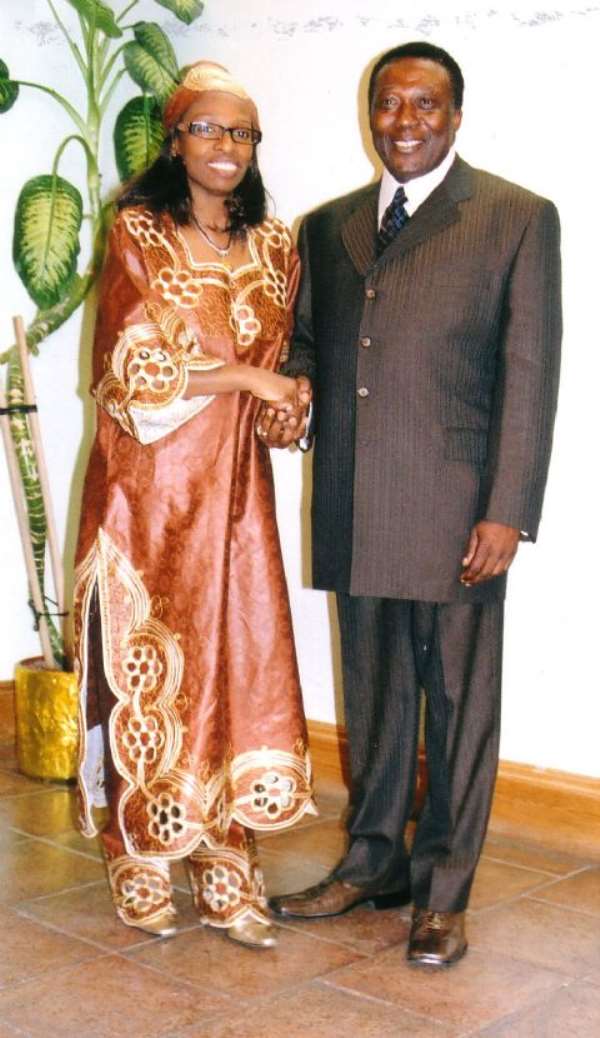 I am happy to be here with you this evening to help raise funds for the Kay Morris Foundation which caters to people living with HIV/AIDS, and other humanitarian projects. I am aware of the commitment of the Foundation which believes deeply that not until we combat this pandemic of AIDS in Africa, which is part of the developing world, the foundation's work will continue. It is documented that a higher majority of about 40 million people worldwide live with AIDS are in the developing countries.

This foundation is aware of the fact that it will be impossible for countries in Africa to achieve their social and economic development goals alone without help from foreign governments and NGOs like the Kay Morris Foundation. We all know that democracy, economic development and the security of the African communities will be at risk if we do not turn the tide of this horrible pandemic.

I will therefore urge all African Governments to use the necessary political will to change peoples' behavior at all levels. These will be from political institutions to the community and to the individual to halt the forces which are driving the AIDS epidemic in Africa. I have to state that, what we do today and tomorrow will definitely change the future for generations of Africans in that they will have a better environment which will be free of this inhuman and dreadful devastation.

There are accounts of the epidemic upsurge of the disease which have been documented of the future of AIDS, and if something drastic were not done to stem the tide of this scourge; the results in the future would not be pleasant. Governments can use the power of story telling to strongly educate their people on the disease and its devastation in order to create a shared basis for dialogue action on critical and difficult issues about the disease.

Most of the problems we encounter with AIDS are rooted in the complex and interrelated social, economic, cultural and medical implications. It is known that one of the biggest challenges that Africa faces is the need to reflect the continent's diversity. This continent encompasses 53 countries which have different and numerous ethnic, religious and linguistic groups. These countries need to have constructive ideas which will be embraced and understood by all without prejudice even though they work within boundaries which have a wide range of economic and political regimes.

Again, the dynamics of the epidemic, indeed the virus itself, are not uniform across the continent and the latest UNAIDS estimates that the average HIV prevalence in 2003 in countries of Southern Africa was 16%, in East Africa 6% in West and Central 4.5% and in North Africa less than 0.1%. There are in effect, cultural imperatives coupled with a number of different, overlapping AIDS epidemics in Africa of differing viral subtypes.

It should be pointed out that this diversity should not be viewed as a barrier to effective action. Rather, it should be viewed as source of creativity and rich experience which presents itself as an important opportunity for inter-country learning and information sharing across Africa.

In view of the seriousness of the epidemic, I would urge African Governments to endeavour to raise the understanding of HIV/AIDS and the forces that drive the future of AIDS in Africa. African governments should continue to raise awareness of the perceptions, beliefs, assumptions and mind sets about the AIDS epidemic and its possible future. They should also increase mutual understanding between various stakeholders, through the creation of a common language for discussions about HIV and AIDS in Africa. They should also investigate and set up large scale and integrated care and treatment centres as well as prevention programs.

I will like to thank the Morris Foundation for its foresight in founding the foundation to augment the efforts of African governments in their fight to eradicate AIDS. The Foundation's work is worthy of emulation and should inspire the cooperation and support of people throughout the world.

The Kay Morris Foundations prime objectives are to help restore a better standard of living in under-developed nations on the African continent and to trumpet the cause of world peace, unity, love, understanding and harmony through seminars, lectures and other social and educational activities. Such activities of the Foundation are testament to the founders' commitment in contributing to the betterment of the African Continent and its peoples.

Prevention programs alone would not quell the spread of AIDS, but they can be effective if people agree to be tested. Many people will not agree to be tested until the results provide them with more than just a death sentence. It is known that only 8% of those who need treatment in Sub-Saharan Africa are receiving treatment and there is little hope that people will line up for testing. Prevention, care and treatment are all necessary to overcome the AIDS crisis.

I will admonish the foundation to include testing of people for the virus in their work schedule as well. This will help to find all those infected so they can seek early treatment and the necessary education/information on the disease.

I met Kay when she approached me for authentication of some documents to enable her to ship some drugs to donate in Ghana and since then I have met her staff in Accra, Ghana in October last year.

At the moment, I believe the foundation is in need of a high influx of monetary contributions from the private sector and from other foundations. The foundation is trying to help so we do not have to be just by-standers but people who are willing and able to contribute their widow's mite in a war that left unchecked would wreak untold havoc on millions worldwide. This is our best time to come together and lend a hand for our brothers and sisters in Africa.

On my own, I will urge people in the affected areas in Africa to live their lives judiciously in treating the incidence of this disease with great knowledge of prevention and desist from being callous about their lives and the lives of others.

To Kay, I say bravo and a job well done. I wish you great success in your determination and zeal which you have attached to this charitable work and lending a hand in this serious and frightful situation.