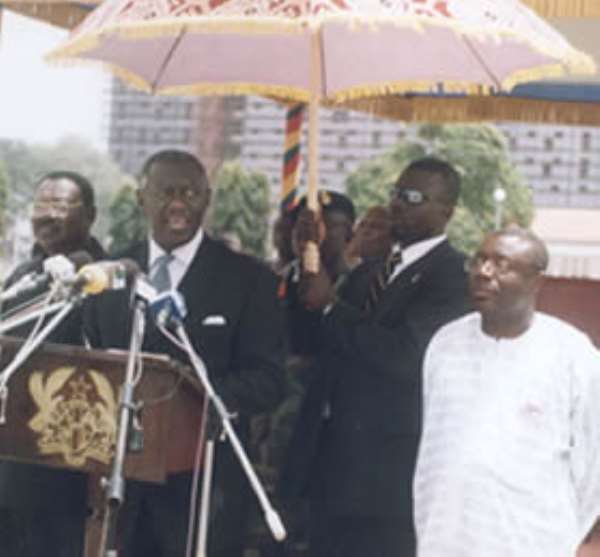 Increase petroleum products' prices enables Gov't to raise enough taxes Accra, March 23, GNA - President John Agyekum Kufuor on Wednesday addressed the Fourth People's Assembly in Accra and said his re-elected Government was sensitive to the hardships associated with the recent 50 per cent increase in the price of petroleum products. President Kufuor flanked by Vice President Aliu Mahama and Papa Owusu Ankomah, Minister of The Interior, and supported by his Ministers, said: "Indeed, sensitivity analyses were done before the introduction of the policy to indicate the levels where the needed cushions to the society could be achieved." He said measures taken to mitigate the hardships included the reduction of personal and corporate income tax by increasing the minimum tax-free threshold from 1,500,000 cedis to 1,800,000 cedis. This would mean that the Government would be releasing 229 billion cedis of tax revenue into people's pockets. The Government also reduced corporate tax from 32.5 per cent to 28 per cent with immediate effect and would further reduce it to 25 per cent by 2007. President Kufuor said other incentives included the reduction of withholding tax from 7.5 per cent to 5.0 per cent and an expected increase in the number of buses of the Metro Mass Transit System from 354 to 1,000 by the end of the year. The Government is also starting the implementation of the Free Compulsory Universal Basic Education (FCUBE) policy and had decided to pay an annual capitation grant of between 20,000 cedis and 25,000 cedis on every school child in first cycle institutions. The Government would be spending 100 billion cedis on the about five million schoolchildren, President Kufuor told the audience at the Accra International Conference Centre. He said the increase in the prices of petroleum products would enable the Government to raise enough taxes so as to reduce the over-dependence on donor support for development and to bring Ghana's pricing in line with what obtained in the West Africa Sub-Region and thereby reduce smuggling. He said countries in the Sub-Region sold a gallon of premium petrol between 34,000 cedis and 48,000 cedis per gallon compared to the ex-pump price of 30,000 cedis per gallon in Ghana. President Kufuor said the Government had to spend two trillion cedis to bridge the level of shortfall to ensure that the nation continued to have its crude oil supplies. President Kufuor said: "Last year, as the price of crude oil continued to rise higher and higher on the world market, Government had to dig deeper and deeper into the national reserve." He said the Government owed it to the people to develop the country but could not do this very well while subsidising the cost of crude oil. "The nation must, therefore, see the Deregulation Exercise and recent increases in the price of petroleum products as bold and necessary measures aimed to free resources for national development. "I am very confident that with prudent management of the economy and goodwill and support from all of us nationals, the nation will, in the very near future, reap manifold benefits from the policy," President Kufuor said.