A Legacy In Jeopardy? – How Obama, Cameron & The Media Got Trumped 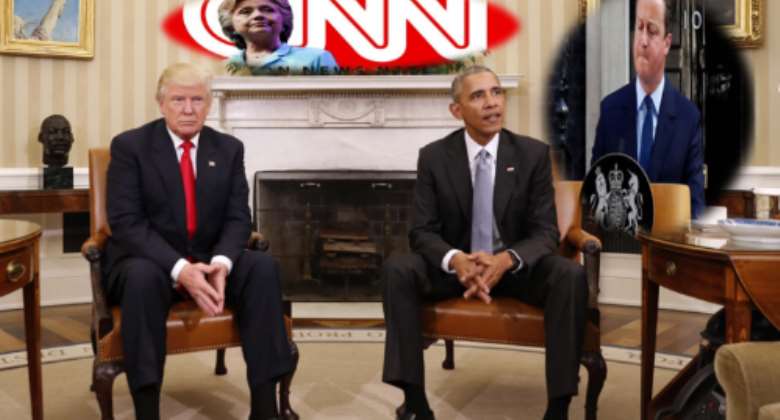 When he thumped his chest on that cold Wednesday morning, January 23rd 2013, and vowed to allow the people to carry their own national cross, demonstrating his unwavering allegiance to the burden of freedom and democracy, little did he know that he would be driving the final nail into his own coffin at the altar of Westminster three years down the line. As an overly zealous political leader who gambled everything on one roll of dice and lost it all, I felt sappy listening to the eloquent Prime Minister’s farewell speech at Number 10 as his voice cracked and eventually bite the dust when the people who mattered most had decided on his early retirement from politics.

The verdict was to become his legacy in history books for many years to come- “the Captain who led his crew members to drown in the Dead Sea,” his critics’ would proclaim.

Weeks before the UK referendum on whether to stay or exit the European Union, Cameron’s cheer-leader on the other side of the Atlantic, Barack Obama, admired for his silver-tongue had joined in the ‘Fear for Vote Campaign.’

There wasn’t a better place to celebrate but reject the master of rhetoric than the Queen’s homeland itself. “The UK is going to be in the back of the queue, if they exit the EU,” the leader of the free world would declare, standing side by side his host David Cameron, whose demeanor had exposed his regret of the presumptuous declaration, ‘giving power to the people.’

The people of UK called Obama’s bluff and the man who was relentlessly portrayed by the induced jaundiced mainstream media as, ‘beyond the queue of qualified candidates to be president’ will ultimately have his first major haul over the coals, and he did it in his usual bombast Trumped style.

From Scotland with love; The Donald beamed with smiles as he dangled his political prophecy in the faces of the arrogant elite, riling his foes and commanding the spotlight. Twitter had become his remedy for inducing insomnia, but thankfully it was the break of day. Trump tweeted after Brexit, “Just arrived in Scotland. Place is going wild over the vote. They took their country back, just like we will take America back. No games!” He later tweeted, “They will soon be calling me Mr. BREXIT,” which was well received with outright scorn and ridicule by the mainstream liberal media.

For all intents and purposes Trump’s thought processes are worlds apart from that of President Obama and the latter particularly would find any such comparisons repugnant; any semblance between the two is purely coincidental. Their point of convergence is remarkably antithesis, a hate-hate relationship will define their love for each day.

For example in the mind of an ‘unquestionable’ democrat like Barack Obama, Fidel Castro, “altered the course of individual lives, families and of the Cuban nation.” In his mind, “history will judge the enormous impact of Castro on his people and the world around him.”

Where as in the mind of a ‘looming tyrant’ like Donald Trump, Fidel Castro was, “a brutal dictator who oppressed his own people for nearly six decades.” In the mind of Trump, Fidel Castro’s legacy is, “that of firing squads, theft, unimaginable suffering, poverty and the denial of fundamental human rights.” Right here, we have our ‘beautiful’ convergence.

So, when the mainstream liberal media is to give their final verdict on the two personalities, the stark contrast as expected should shutter any optimism for the future. ‘Obama is to Mother Teresa as Trump is to Hitler,’ and the Clinton News Network (CNN) would revel in such headline while its worshipful viewers cheer on.

In short, the huge ideological and personality gap between the two did not prevent them from having a civil discussion and subsequently posing for the cameras. But beyond the niceties, the Tsunami that hit Trumpland will for a long time flummox the Liberal-in-Chief. Having been described at a point in time by the president-elect as the “worst president ever in US history,” Obama gently reminded the ‘Showman’ that at least he will “go down as president” with an underlying cynicism that the presidential baton was sure bound for the ‘ordained heir’-Hillary Clinton. A portrait of the look on President Obama’s face during the election night as the results were being called will certainly soothe the soul of many Trumpsters especially during this Christmas season.

In the end, under a huge cloud of a legacy in jeopardy and completely ‘Trumped’ by the electorates in US, Obama turned to Berlin where Merkel gladly welcomed him with hugs and kisses during his recent ‘Trump Reality Explanation Tour.’ Together, they both drank themselves to sleep with the hope that the Trump reality is simply a dream, but like Dom Cobb’s (Leonardo DiCaprio) shock end in the 2010 movie Inception, Obama will wake from his long slumber only to find that the Trump reality is indeed becoming a long nightmare-a dream within a dream.

Unfortunately for Barak, the answers surrounding what will become of his legacy lies chiefly in the ‘tinny’ hands of Mr. Trump and the kind of stick he decides to wield. The outgoing president can continue to lead a dance in hope that reality will suddenly demand of the president-elect to be merciful and perhaps preserve his ‘fantastic legacy,’ but reality as we know can sometimes be very discomforting.

Time is surely our best ally and 2016 has indeed demonstrated how time can be a master humorist.

G. K. Sarpong is a conservative political, business and sports columnist for many international news organizations. He has authored over 8 books, his latest is Entrepreneurship Africa. Send him an email at [email protected] or visit his store at www.amazon.com/author/gksarpong .