The Garden of Eden? 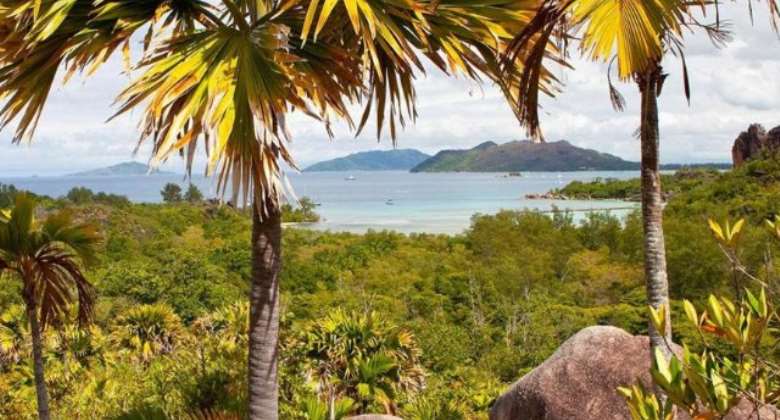 In 1881, General Charles Gordon (later known as Gordon of Khartoum) made the long trek from the United Kingdom to an archipelago off East Africa.

The Seychelles, a group of 115 islands in the Indian Ocean, spent most of their existence completely uninhabited by humans. The British officer didn’t know what to expect – but no one was prepared for what he found.

Gordon, a religious man and a Christian cosmologist, recognized this land from descriptions in the Book of Genesis: it was the Garden of Eden.

Here, 135 years later, I stood in the same valley as Gordon on the island of Praslin, aware of what I had come to see but still equally entranced. Within the first few steps of entering the Vallée de Mai, I was enveloped in a world of intense greenery. Palm branches fanned out, weaving together to form a thick canopy that blocked out the sky. Everywhere I turned, a dense forest of enormous trees reached dizzying heights of 34m, their branches engulfing their surroundings with palm fronds 10m long and 4m wide.

There were no signs of human life apart from an earthen path that was often obscured by the overflowing plant life. Here, in a jungle of ancient palms, there was the distinct sense that this was a place unlike any other in the world. Everything was larger, bolder, denser, wilder. I didn’t have to wonder how the Vallée de Mai must have looked to Gordon back then; the forest has remained largely untouched since prehistoric times.

The Vallée de Mai has remained largely untouched by humans (Credit: So Seychelles/flickr)

It’s not just the paradise-like abundance that suggested Gordon’s theory. The Vallée de Mai is home to a particularly mysterious allusion to the birth of man and woman: the coco de mer, a rare type of palm tree known for its suggestive “male” and “female” seeds that bear an uncanny resemblance to human reproductive body parts. The seeds – the largest and heaviest in the plant kingdom – are even adult-sized, reaching weights of up to 30kg.

The coco de mer has spawned so many legends that the tree is fabled and revered in lands far beyond the Seychelles. When these oversized, suggestively shaped seeds washed up on the shores of the Arabian Peninsula hundreds of years ago, they quickly gathered a mythical momentum. They were seen as symbols and gifts of fertility; rumours swirled about their powerful aphrodisiac qualities. It was widely assumed the large seeds were coconuts that had floated away from undersea palm trees; Middle Eastern princes offered a fortune for these rare treasures, and people took to the treacherous oceans, searching erroneously for the underwater palm tree.

Interestingly, the sensitive tree can only thrive on Praslin, where it originated, and on one other Seychelles island, where it was introduced. It takes three months for a seed to germinate, and it must remain exactly where it fell, untouched, in order to grow. Legends of the coco de mer spread far and wide, but the truth was even stranger than fiction. Thanks to the trees’ staggered growth patterns, where palms growing the large “male” seeds exist next to ones that bear only “female” seeds, imaginations ran wild – particularly on windy nights, when the male and female parts intertwined.

The rare coco de mer, which alludes to the birth of man and woman, only grows in the Seychelles islands (Credit: Michele Falzone/Alamy)

In its 40 years of independence, the Seychelles has gone to great lengths to protect its Garden of Eden, one of the world’s smallest Unesco World Heritage sites.

The coco de mer is the symbol of the Seychelles; park rangers guard the protected land proudly and fiercely, and the seeds are strictly regulated. Both tourists and locals need a permit to buy the coco de mer seed, and only certain rangers are allowed to collect a limited number from the Vallée de Mai area. Anyone else caught taking one faces five years of jail time.

The valley is home to a variety of small creatures, all with uncanny abilities to hide in plain sight. There are geckos, oversized slugs, tree frogs, chameleons, insects, and of course, the Garden of Eden’s famous snakes. Then there is the forest’s famous and highly endangered black parrot, which builds its nest in the bowl of the coco de mer tree. The lives of these birds and the survival of the coco de mer are intertwined: the parrots pollenate the trees, and the trees are the only place the parrots will nest.

The islands of the Seychelles are home to many mysteries. Only 12 of the archipelago’s 115 islands are inhabited. Praslin is one; like the other islands, its granite base is ringed with some of the world’s most beautiful white-sand beaches guarded by the towering boulders found everywhere across the Seychelles. Here, in the small Vallée de Mai, it’s hard to remember that the rest of the world exists only a few kilometres away.

For centuries, scholars have debated the original site of the Garden of Eden. Walking through the Vallée de Mai, with its larger-than-life nature and rare peculiarities, it’s easy to see why in this part of the world, there is little doubt.

With its incredible nature and rarities, it’s easy to see how this could be the Garden of Eden (Credit: imageBROKER/Alamy)

If you liked this story, sign up for the weekly bbc.com features newsletter , called “If You Only Read 6 Things This Week”. A handpicked selection of stories from BBC Future, Earth, Culture, Capital, Travel and Autos, delivered to your inbox every Friday.