Akufo-Addo or Mahama – why should I care which of them wins? 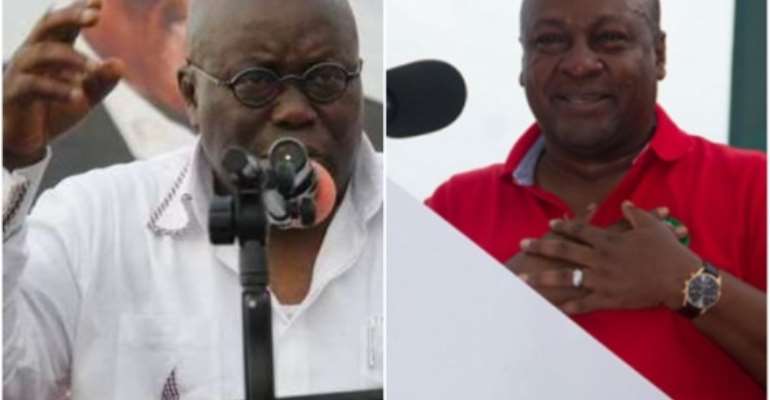 It has been said that there are really no undecided voters. Everybody has, deep down, an inclination towards one candidate. In the present situation where two candidates are the clear front runners, it is difficult not to prefer one to the other or, rather, to detest one more than the other. Even among those who support one of the third-party candidates, there will be an inclination towards either Mahama or Akufo-Addo in the event of a run-off between the two. A few hours to the election, it will be difficult to find someone whose mind is not already made up. But what difference will it make who I vote for?

For a vast majority of Ghanaians, it will not make a blind bit of difference who wins on Wednesday. It is in this sense that the elections are NOT about Ghana’s future. Our country is NOT at any crossroads. It is true that a very inspired leader can make a lot of difference in the fortunes of a country. But neither Mahama nor Akufo-Addo is any such leader. Both of them are drab and uninspiring figures. No Ghanaian is going to vote for either of them because she genuinely believes the person voted for is going to turn the country into a paradise. The only crossroads that can be talked of is the possibility of election violence. No decent Ghanaian wants that.

But there are groups of Ghanaians for whom the outcome of Wednesday’s vote is going to make a hell lot of difference! These are the people who find themselves directly in the eye of the storm. There are individual Ghanaians who are going to gain tremendously by an Akufo-Addo victory. And there are others who are going to lose when Mahama falls from power. These elections are more about these individual fortunes than about the future of the country. The fortunes that will change are only marginally linked to the greater fortunes of the nation.

If Mahama loses on Wednesday, he will stand down from power and with him will go all the ministers, appointees, hangers on, etc. and his control of the patronage system that still exists in our country. At the same time, Akufo-Addo will come in with his coterie of favour seekers, vultures and what have you. There will be plum posts to dish out to the fateful – heads of parastatals, juicy ambassadorial posts, government contracts going to favourites and the very Ghanaian desire of being in power and lording it over others. The stakes are high for these people. Even a tenuous link to the wife of the head of state or a powerful minister can help get your son or a cousin a job somewhere. Then there are the parties’ so-called foot soldiers who may also gain something according to their station in life. These are the people who will be the true losers or gainers from Wednesday’s vote.

Those Ghanaians who are far away from the corridors of power are not going to be affected in any meaningful way by the outcome of Wednesday’s vote. The main reasons most Ghanaians are going to vote for one person rather than the other are clear. Many Asantes and Akyems will vote for Akufo-Addo because he is their tribesman. Most Ewes will vote for Mahama, not because they particularly like him, but to spite Akufo-Addo. People will vote for those who are their abusua so they may personally benefit one way or the other from his victory. Some people have invested emotionally in supporting one side and will follow it up with their vote. The so-called foot-soldiers will vote for the party they have toiled for. The hired hooligans, if they have a vote, will give it to their pay masters or else wait to be called upon to unleash violence on the enemy. Not many Ghanaians will vote for ideological reasons since such matters are not clear-cut in our country, and, anyway, are understood only by the educated middle class. And many Ghanaians will simply stay put at home, not minding what happens.

The ultra-partisans of either party who write daily articles to Ghanaian websites extoling the non-existent virtues of those they support will rejoice or weep as the case may be. Some of them will be able to write articles immediately after the announcement of the results. Some will dare not.

And so, whom do I want to win? Actually, my dear reader, I don’t care a damn who wins! I know life in Ghana will go on as usual.

‘Mahama Is Visionary, A Leader You Can Trust’ – Naana Jane
28 minutes ago