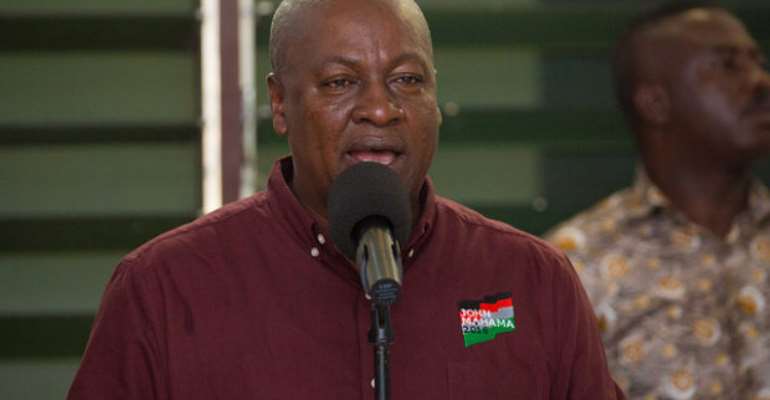 “A long habit of not thinking a thing wrong gives it a superficial appearance of being right.” Thomas Paine

WE HEARD IT LIVE. Our President addressing the people of Lawra stated: “Sometimes I feel sad when I see some of our Northern brothers running around and also doing this. They will use you and dump you. Let anything happen today and let our brother Bawumia say he is standing for President in NPP. They will never give it to him… when the misfortune hit us and Mills passed on…if it was another party, they would have insisted there should be a congress… they would have given the leadership to somebody else…I am proud to be a member of the NDC because I know it is a party that opens opportunities for all people of Ghana irrespective of your ethnic affiliation or your religious affiliation.”

And the President, a graduate of history, went on to give a distorted account of the leadership of the United Party vis-à-vis the National Liberation Movement and the Northern People's Party in the early post-independence Ghana!

This vile, abominable, ghoulish, nightmarish, outrageous and repulsive statement gets coloured and garbled by His Excellency Haruna Atta's statement: “I do recollect very clearly… Nana Addo Dankwah Akufo Addo invited me to his office (and he said) 'Haruna, your support for Aliu was flamed, if you think our party will cede its Akan leadership, you are wrong…”

The Ghanaian Ambassador to Namibia continued: “Not only that, Mr. Hackman Owusu-Agyemang, going beyond Nana Akufo Addo's ethnicity, used religion as his anti-Aliu stance: “… with a nation of about 70% Christians, do you think it will be fair to have a Muslim President?” “O, judgment, thou art fled to brutish beasts, And men have lost their reason…” that was erudite Mark Anthony moaning the assassination of Julius Caesar, so repeats Kwasi Adjei.

There is nothing wrong in appealing to your people to vote for you because you are a 'son of the soil' but why should anyone denigrate other parties and their membership/leadership and attack them with tribal and ethnocentric statements?

When Mahama made a courtesy call on the Asantehene, the King admonished him to tell Ghanaians what he has been able to do and what he is capable of doing next time he is given a renewed mandate. The President should have evoked the sobriety in him. But what has been observed for the past eight (8) years of his ascendancy to the top of Ghanaian politics is that Mahama does not listen to advice. He has cocooned himself in the comfort of a coterie of friends and relations who, besides barricading the fortress against any entrance to him, would not give him good advice. They have built strong walls to keep people who do not belong at bay, portraying them as intruders.

Just because Mahama wants power, he is invoking Neanderthal argument, and stoking the fire of ethnicism – 2016! It is puerile, shameful, cynical and, of course, dangerous.

You remember Rwanda? The minority Tutsis (cattle herders) had lived peacefully with the majority Hutus (farmers) under Belgian hegemony – until 1994. The immediate cause of the war was the shooting down of the air plane carrying President Habyarimana and Burundian President, Cyprien Ntaryamira on April 6, 1994. This signaled the end of the various Peace Accords and the beginning of the war.

Self – created barriers were erected, and ID cards were screened to identify Tutsis (the ID cards contained ethnic classification of Hutu and Tutsi). (You see the wisdom in General Kutu Acheampong's edict cancelling “Tribe” from all statutory application forms. Yet, Asantes did not pardon him just because he was a 'son of the soil'?). A local radio charged: “You have to kill the Tutsis; they are cockroaches” The messages were everywhere: “All those who are listening, rise, so we can fight for our Rwanda… We must all fight the Tutsis, we must finish with them, exterminate them, sweep them from the whole country… They must be exterminated.” It was the Rwandan Patriotic Front (RPF) led by Paul Kagame that ended the genocide. At the last count, between 700,000 and 1,000,000 people were slaughtered: 70% of Tutsis and 20% of Hutus, Any lesson?

Remember also the unspeakable atrocities of the Liberian civil war (1989-1997) where innocent children had their hands chopped off and left over 600,000 dead, and child soldiers' senses had been numbed to barbarity; or the Sierra Leonean civil war (1991-2002) with child soldiers, who defiantly and callously murdered their own parents; or the Cote d'Ivoire civil war (2002-2007) with a rebel-held Muslim north and government-held Christian south. Remember what helped Nigeria to have a smoothly run election in 2015– the presence of Professor Attahiru Muhummadu Jega as the Electoral Commissioner, with a clear unbiased mind and transparent processes.

Why should we go back to ethnicism/tribalism? What defence do the NPP and its flagbearer have for these accusations? The NPP's running mate, Dr Mumuni Bawumia, is from the North. If something should happen, and Nana Addo decides not to carry on with the task of Presidency, the NPP, by its tradition, would throw the contest open, but Dr. Bawumia stands a good chance of carrying the day. What do the minority tribes say to all these: Krobos, Adas, Gas, Afutus, Sefwis, et cetera?

Look, the NPP believes in democracy, unlike the NDC which can have the Swedru Declaration, in which Flt. Lt. J.J. Rawlings in a solo political puissance gave the leadership mantle to Prof. Atta Mills in 1999. Remember the aftermath- the rumpus it caused, leading to Goosie Tandoh leaving the NDC to form his own political party. Or the case in which George Boateng was smeared with a disease of the brain for daring to challenge President Mahama. Top it up with the ouster of Dr. Hilla Limann, the first Ghanaian President from the north by Flt. Lt. Rawlings, owner of NDC.

What President Mahama said in 2008 is as good today as it was then: anybody touting infrastructural developments is doing an exercise in mediocrity. When Mahama said this in 2008, he had disciples. What has changed now, for him to sing a new song?

President Mahama's insistence on having done only one term is ridiculous as it is quixotic. So if Mahama should resign now (we will not talk of death), Amissah -Arthur would mount the platform and claim that he is a neophyte, being a 'tabula rasa' as far as governance is concerned, so Ghanaians should give him a mandate for 8 years!

Many people have made their minds; only few are still keeping their choice to their chests, for 'last minute' dramatization by J. M. – that is waiting for his swan song: whether it will be J.M. Toa so or J.M. Twa so.

Sorry, John has conjured his own doom: where did all the loans he took from foreign donors go to? How did SADA with all officials from the north fare? He tried to brand Nana Addo as a person who would sack chiefs if he were given the mandate. It did not wash. How is he treating Abugri, the Northern Regional Chairman of NPP? He should be satisfied for the opportunities he has had. Mind you, Martin Amidu, Big Brother, a Northerner and founding member of NDC is watching. Adieu, if farewell, bye-bye, or so long are too mundane.