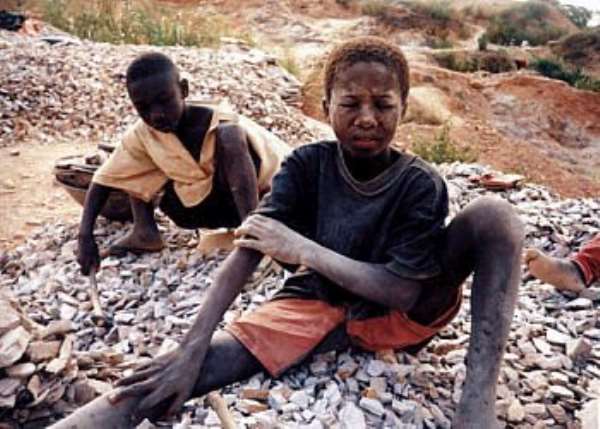 MR. KWAMENA BARTELS, the Minister for Private Sector Development and PSI, has said that foreigners with construction companies should not be allowed to set up a quarry to produce quarry chippings in the country.

He said, they should be forced literally to buy construction inputs from local and indigenous companies as a way to ensure that part of their profits remain in Ghana. This, according to him, would help Ghanaian companies build up their capacity in the production of these inputs.

According to him, in their bids, they usually quote the local prices of these inputs, not the prices that create wealth for Ghanaians.

He noted that in the president's presentation to parliament in December 2002, it was stated that, "the shared vision of all Ghanaians is to continuously create wealth to improve the worth and welfare of our people and to reduce poverty."

He made this assertion during the 36th annual conference of the Ghana Institution of Engineers (GHIE).

According to him, strategies for accelerated growth in the document were based on Agro-based industrial development and information and communication technology.

In his delivery, he identified three priority areas in meeting the objectives that had been set by himself for his second term of office, namely human resource development, private sector development and governance.

Noting that the potential for wealth creation for our countrymen is enormous, he said "Government is keenly aware of the human resources requirements for achieving these goals. It recognizes too that there is an urgent need to re engineer the structures in the country if we are to take full advantage of the potential of engineering contribution towards wealth creation."

The minister took the opportunity to encourage the private sector to become involved in commercializing research findings as stated in the budget statement and economic policy of government for 2005 engineers and the engineering profession in general could be used to contribute their full quota in the implementation of the president's vision as it relates to wealth creation.

The president of GHIE, Mr. W.E.O Apatu hinted that they have appealed to the government to allocate at least 1% of GDP for the development of science and technology and its transfer for wealth creation.

"We have sent a proposal to the minister of trade and industries, Hon. Alan Kyeremanten, for the formation of an Apex Body which will co-ordinate the desperate efforts we are making in the country into a one-stop body for technology development and transfer before the benefit of the Small and Medium Scale Enterprises SMEs and other satellite industries."

Mr. Apatu said the conference would discuss thought-provoking informative subjects that are in line with the nation's needs.