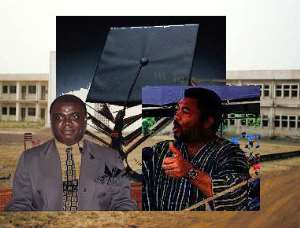 ... NDC loyalists blame Saddique, NPP Tamale N/R, March 17, 2005 (Chronicle) -- There are indications that tension will sooner than later grip the Northern Region, especially its capital, Tamale, following the cancellation of the convocation to confer an honorary Doctorate Degree on the former President, Flt. Lt Jerry John Rawlings, by the authorities of the University for Development Studies (UDS). Loyal supporters and sympathizers of Mr. Rawlings are dying for a fight with the incumbent government, which they suspect of being the brain behind the cancellation of the award programme. Word going round in the Tamale metropolis is that the Chairman of the Northern Regional Security Council (REGSEC)and Regional Minister, Hon. Boniface Abubakar Saddique, and the government ordered the chairman of the University Council, Mr. Daniel Gyimah, and the Vice Chancellor of UDS, Prof. B.K. John Kaburise, to halt the planned award ceremony. Rawlings sympathizers who called in to radio stations here, wondered why the aforementioned personalities had kept mute and were not willing to explain fully why the ceremony had been cancelled. They accused the government of envying the former President. Monitoring the Tuesday March 15, Morning Show programmes of some of the radio stations in Tamale, almost all the callers who expressed their views did not hesitate to attack the NPP government and the Regional Minister, for influencing the organizers of the ceremony. Following the intense pressure, accusations and allegations from the majority of the callers, the hosts were compelled to take some of the callers off air. The Rawlings's award programme was put on hold, following alleged “security reasons,” cited by some powerful men in government, is what has spread in the metropolis. The Chronicle sources from the NPP camp in the metropolis however allege that it was an earlier announcement by the NDC sympathizers that they would carry the former President in a palanquin as their “real President” and also push his car right from Tamale to Nyankpala, the UDS campus, for the programme that had created the stir in the metropolis. This announcement, according to sources, compelled the Regional Security Council and other authorities to quickly intervene, since it had the tendency of creating havoc in the already volatile metropolis and as well undermine the integrity of the incumbent President 'AWARD WON'T MAKE RAWLINGS PRESIDENT OF GHANA AGAIN' Meanwhile, Abubakar Saddique Boniface has vehemently debunked the assertion that he and the NPP government had a hand in the cancellation of Mr. Rawlings's Doctorate award ceremony. In a telephone interview with the paper yesterday, he described as “rumour” the allegation that the Northern Regional Security Council jettisoned the activity on security grounds. “REGSEC has never met to discuss Rawlings, since he has never been an item on our agenda,” he said. He asked, “Who is Rawlings and what can he do to scare the security in the Northern region? Is he not an ordinary man like any other Ghanaian?” Mr. Saddique maintained that he did not advise the government to halt the honorary award ceremony. “If his sympathizers have decided to carry him and push his car from Tamale to Nyankpala, there is nothing wrong with that, because the man, as his people feel, deserves praise and they have decided to carry him, but that cannot make or bring him back as President of the Republic of Ghana.” “What I know is that the honorary Doctorate Degree will only make Rawlings a real statesman and real founder of UDS, so why should I or the whole government envy his honour,” the minister wondered. According to him, the whole programme was instigated by an institutional body, which the government has no authority over. He therefore charged his critics to attack the right body responsible for the institution of the award as to why they have rescinded their decision. Meanwhile, in a related development in Accra, the office of the Vice-President was reported by Peace FM's Kwame Sefa Kayi yesterday morning to have sent a note to the station, indicating that Mr. Daniel Gyimah, the UDS Council Chairman would issue a press release, to which the Veep's office would subsequently respond.