Address by The Ghana High Commissioner to Canada 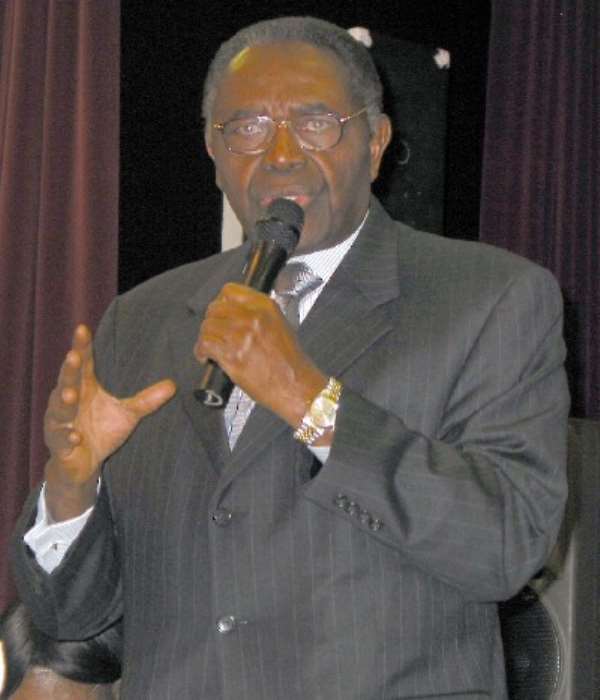 H. E. Samuel A. Odoi-Sykes to Ghana Friendship Association of Edmonton, Alberta on the Occasion of the Ghana's 48th Independence Anniversary Celebration on March 12, 2005

Ghana chalked 48 years as an independence state on 6th March, 2005. It is an occasion for stocktaking, a looking back, and for necessary readjustments in our national life.

There are some who argue that there is nothing to cheer about for all these years, pointing to the problems and difficulties of the country, and comparing Ghana to the so-called Asian tigers of Singapore, Malaysia, South Korea, etc. which gained their independence at the same time with Ghana, and which have left Ghana far behind in economic and technological development.

Whatever force may lie in that argument, it is imperative to look at Ghana's problems in the context of general under-development of the African continent.. Africa is the world's poorest continent, plagued by years of Civil Conflict, Bad Governance, Corruption, Ignorance, Disease, and lacking in the most elementary infrastructure.

Over 200 million people in the Continent have no access to health services;

20 per cent of the population of some 750million people is afflicted by violent conflict, resulting in massacres, refugees, famine, diseases, etc.

An African child dies every 3 seconds

About half the population 600 million people in sub-Saharan Africa live on less than US$1.00 a day

Africa has become a scar on the conscience of the world.

Ghana has experience some of the problems that have held back the development of the African continent. That accounts for the present stage of its development.

Ø 1966-1992 - Alternation between Military and Civilian regimes.

Long periods of totalitarian military rule retarded Ghana's economic and political development whilst the Asian tigers were making steady progress in developing their countries. Military adventures, who unjustly ceased power from constitutionally elected governments and ruled by decree for some 22 years; are the main culprits for the political and economic under-development of Ghana today.

4th Republic - The birth of the 4th Republic in 1992, after 10 years of military dictatorship, marked a watershed in Ghana's political history. It was a return to multi-party democratic rule.

Ø From 1992-2000 (8 years) the N.D.C. was voted into power under Mr. Jerry Rawlings following his 10 years military rule. So Mr. Rawlings had opportunity to rule Ghana for 18 years plus.

Ø The current N.P.P. government under President J.A. Kufuor was first voted into power in December 2000, and again in December 2004. On the whole the performance of President Kufuor's administration is assessed by the international community to be quite satisfactory. The macro economic indicators confirm this assessment.

Ø The Management of the Economy has been more efficient and effective than before. There is greater financial discipline and a clear sense of direction.

Ø The Ghana Poverty Reduction Strategy is effectively tackling the chronic problem of poverty. Developments are taking place in all the Districts and Regions of the country with funds accruing from the HIPC programme.

Ø Harsh and Unpalatable Decisions have had to be taken in the long-term health of the economy, and the ultimate welfare of the people. Such acts are not mistakes. A leader whose primary or main object is to ensure his own well being or survival will shy away from harsh but necessary decisions, and drift along the line of least resistance.

President Kufuor's government is committed to Democracy and Good Governance. This has placed Ghana on a high pedestal in the international community. Ghana is hailed as a beacon of hope for democracy in Africa. Democracy is essential for the preservation of the individual's dignity and conducive to economic development and political efficiency

Ø The greatest legacy which President Kufuor will bequeath to Ghanaians are Individual Liberty and Freedom of Expression, which have now become the Ghanaian way of life, and are taken for granted.

-Now Ghanaians are free to say what they think and do what they believe in, within the law, without the fear of secret arrests and detentions.

-Now every Ghanaian lives without fear or threat off disappearing, or being deprived of his personal liberty without just cause.

Ø President Kufuor's regime marks a renaissance of Freedom and Democracy in Ghana, a regime of Tolerance and Civility in words of deeds.

Ø But things are still difficult and demand a radical turn around. Economic growth of about 5% is still low and cannot take Ghana to the medium income group of countries by 2010. Lack of high economic growth and the absence of a vibrant private sector account for high unemployment.

Corruption has to be more vigorously tackled.

Workers must change their ethic and make a more meaning contribution to the country's development.

GHANAIANS IN THE DIASPORA can also play a vital part in many ways to assist the rapid development of the country.