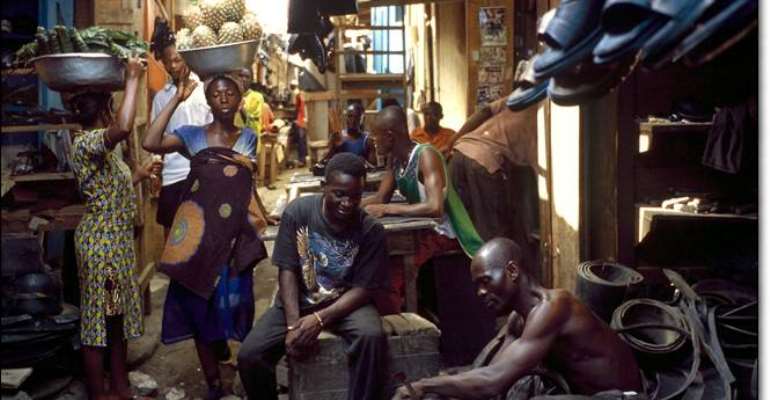 Kumasi, Mar.16, GNA-Some traders and hawkers who have been affected by the recent KMA decongestion exercise, have accused the assembly and the Race Course Market Allocation Committee of underhand dealings which had sparked off confrontation and clashes over portions of land by the stranded traders at the market.

The clashes, which were hightened on Tuesday morning, led to a deep cut on the head of one Kwame Owusu, secondhand shoe seller. He is alleged to have been hit by a stick when five other secondhand shoe sellers who had been ejected from the "Morroco" area by the KMA, attacked him suddenly during an argument over the ownership of a portion of land at the race course market, a relocation for the displaced hawkers.

Owusu was rushed to the Komfo Anokye Teaching hospital (KATH) where he was treated and discharged while some of the traders who had gathered there managed to arrest one of the suspects and handed him over to the Suame police where he was placed in custody.

According to some of the secondhand shoe sellers who spoke to the Ghana News Agency at the race course after the incident, the inability of the allocation committee to demarcate the land transparently to all the various trade groups had created anxiety and confusion among them. This, they said, had led to the struggle by individuals for portions of land, which had often resulted in confrontation and at times dangerous clashes leading to injuries and destruction of goods. They said most of the ejected traders were stranded at the race course market and did not know the next line of action. Some people, they said had also taken advantage of the predicaments to extort monies from them.

They appealed to the allocation committee to identify the number of each of the affected trade groups and allocate the sites appropriately, so that, their leaders could allot the portions equally to individual members in the groups.

When contacted, Mr Atta Boafo, Chairman of the allocation committee, said the committee was currently in the process of identifying the various trade groups and their old locations to guide the committee in site allocation at the race course market. He said after the exercise, leaders of the various groups would be made to compile the names and pictures of their members so that, they could allocate portions of their site to them.

Mr Boafo denied that the committee was allowing individuals to look for their own portions at the market site and described the incident on Tuesday morning as unfortunate.