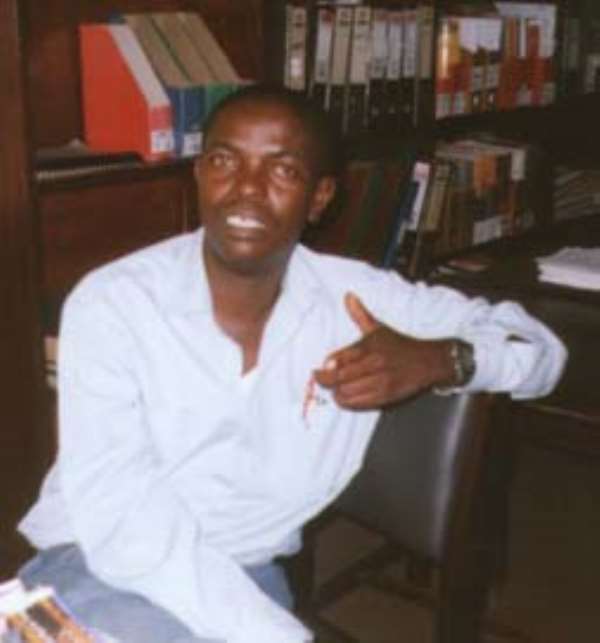 A-G's attempt to sabotage 'wahala" demo - Pratt The Managing Editor of The Insight, Kwesi Pratt Jnr. has been called upon to clear a tax default of ¢75,497,365 he and his company, Millitant Publications owe the International Revenue Service (IRS) and Government for the period 1993-2004 before he gives the IRS and Government any lectures on how to widen the tax net.
Some workers of IRS who made these disclosures yesterday with the appropriate documentation accused Mr. Pratt of making baseless suggestions about how to improve the nation's tax revenue situation when he and his company have tax arrears which they have failed to clear.
Providing documentation and records to back their claims, the workers said Mr. Pratt's company of which he is also a director has defaulted in the payment of company income tax to the tune of ¢52,766,819 whilst Mr. Pratt himself has defaulted in the payment of personal tax to the tune of ¢19,302,450.
On the national reconstruction levy, the IRS staff said Kwesi Pratt's company has defaulted in the payment of the national reconstruction levy to the tune of ¢547,096 with another default of ¢635,000 on company registration fees.
For other taxes, the default in respect of the company's operation is ¢246,000. When pressmen got in touch with Kwesi Pratt on phone yesterday on the development, his first response was, "the same story has been sent out to other newspapers.
"It is the most foolish story being put out by the auditor-general to sabotage the 'wahala" demonstration but it will not work. When did the auditor-general become a tax collector?" he quipped.
Kwesi Pratt stated categorically, "we have paid up our tax obligations up to year 2004 and we have the receipts to prove that.
"There are big companies that owe taxes," he pointed out and wondered, "why the Insight,...why the Insight.
The IRS workers also provided documentations to show that for the period 2001-2004, Mr. Pratt's company's tax liability was ¢32,055,486 of which only ¢300,000 has been paid. The workers also maintained that the directors of Mr. Pratt's company have failed to submit the company's annual returns to the registrar generals as required by the Companies Code. Report Will Not Dampen My Spirit The Managing Director of the Insight Newspaper, Mr. Kwesi Pratt Jnr. has stated that reports about his alleged tax evasion which is circulating in the media, is a plot by the auditor-general aimed at dampening his spit to make it impossible for him to take part in the "Wahala Chapter Two" demonstration.
Mr. Pratt who featured on PeaceFM's morning show programme today in reaction to the publication pointed accusing fingers at the auditor-general, Mr. Edward Dua-Agyemang, for masterminding the plot so as to weaken the frontline of the Committee for Joint Action (CJA) of which Kwesi Pratt is a key member.
Mr. Pratt who is also the managing director of the Insight, emphasised that he has resolved to taking part in the chapter two of the 'wahala' demonstration which is scheduled to take place on Thursday.
Meanwhile the auditor-general, Mr. Edward Dua-Agyemang has denied that the publication was a plot masterminded by him to divert the attention of the public on the impending demonstration. According to him, the exercise is an on-going one, in which investigations into the tax positions of 21 media organisations are being conducted. He said the exercise is not to deal directly with the person, as Kwesi Pratt perceives.