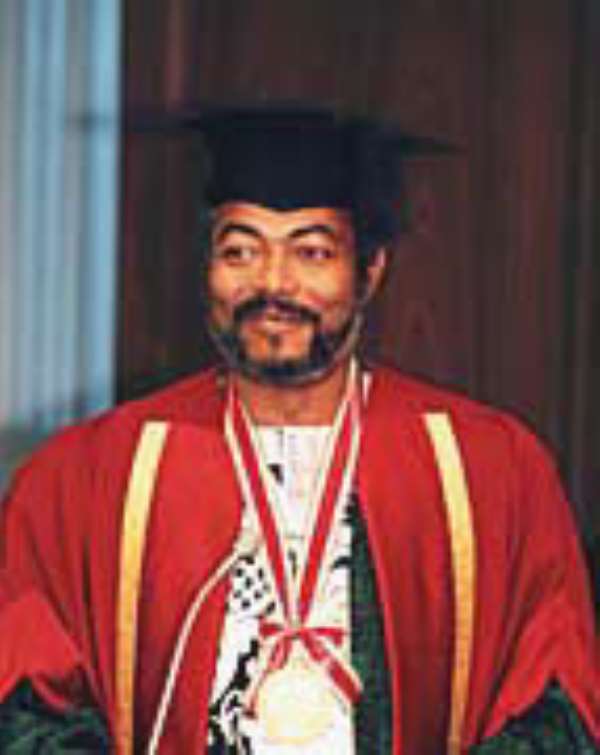 ... Vice President had a hand in it? ... Security threat was a bogus excuse Accra, March 15, 2005 (Chronicle) -- The slated honorary Doctorate degree award by the University for Development Studies (UDS) for the former president, Flt. Lt. Jerry John Rawlings that sparked off a heated controversy has been cancelled.
The cancellation was upon the directives of the chairman of the University Council, Mr. Daniel Gyimah, citing security considerations.
Mr. Gyimah, who is also the Managing Director of the National Investment Bank (NIB) is an active member of the New Patriotic Party (NPP) and also a leading member of the Danquah-Busia Club.
Sometime ago, when the Chronicle was investigating an Indian group, ELAN, over alleged shady dealings, Mr. Gyimah, had commandeered BNI operatives to sit in a meeting to interview him, a proposition that our reporter, Mr. Raymond Archer, had rejected.
Mr. Gyimah, a brother of Mrs. Cecilia Johnson, General Secretary of the 31st December Women's Movement, was also a working colleague of the Chief of Staff, when he worked at the NIB.
In a letter written to the Vice Chancellor, Prof. B.K John Kaburise, the Mr. Gyimah had requested that the congregation be called off assigning security reasons that he had been made aware of.
The Vice Chancellor, who had earlier in an invitation letter to the former President requested him to acknowledge the honour that was to be conferred on him by the UDS, at a Special Congregation on Saturday, March 19, this year, wrote another letter to the office of the former President canceling the programme.
In the letter to the former president, the Vice Chancellor had stated, “I regret to inform you that the chairman of the University Council has directed that because of national security considerations which he has been made aware of, the special congregation scheduled for Saturday March 19, 2005 be cancelled.” Security capo denies security threat Meanwhile, the National Security Co-ordinator, Mr. Francis Poku and the Northern Regional Minister, who is also the Chairman of the Regional Coordinating Council, Mr. Boniface Abubakar Saddique, have both denied any security implications of the event.
Speaking to Radio Gold yesterday, the regional Minister had stated he and his colleagues on the Security council could not see how a purely academic event could pose a security threat, and that they had given the university clearance.
But information available to yours truly allege that the chairman of the University Council, issued his cancellation directive after attending a meeting at the office of the Vice President last Friday.
When the Special Assistant to the Vice President, Alhaji Aremeyao, was contacted, he could not confirm nor deny the said meeting taking place, stating that he was in Tamale on an assignment and would want to concentrate on it and return home safely, but directed the paper to the office.
Several attempts to speak with the Vice President or anybody from his office proved futile, as the phone rang continuously without response.
In the said letter, canceling the event, the chairman was said to have 'further directed that all enquiries concerning the cancellation should be directed to him personally for his attention.'
But several calls by the Chronicle yielded no results, as his phone was 'either switched off or out of coverage area.'
In our yesterday's publication, we reported that the honorary doctorate degree to be conferred on the former president, Flt. Lt. Jerry John Rawlings by the University for Development Studies (UDS), for his role in the establishment of the school had been halted by the Chairman of the University Council, Mr. Daniel Gyimah.
Meanwhile, The Chronicle has gathered that the withholding of the award has been necessitated by pressure mounted on the University Council Chairman, Mr. Gyimah Mr. Gyimah and the Vice Chancellor, Prof. Kaburise were also reported to be in disagreement over the intended award, but both refused to clarify the situation to The Chronicle on the basis that they had been advised not to talk to the press on this matter.
The Vice Chancellor, who could neither deny nor confirm the story, directed this reporter to the chairman, saying, “I have instructions from the University Council that I should not speak to the press on this matter. Kindly talk to the Chairman of the University Council.”
When, Mr. Gyimah was also contacted, he was very brief and said; “I have instructions not to speak to the press for now.”
The government has also denied any involvement in the matter, saying the University is autonomous according to the Minister of Information, Mr. Dan Botwe.
The PRO of the UDS had also indicated on Joy F.M that the cancellation of the congregation does not rule out the award to be conferred on the former president.

SRC election: National security intrusion is an attack on ac...
32 minutes ago