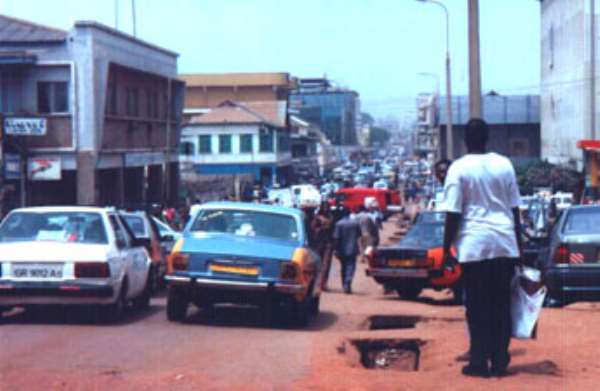 Fallout of Ama Action ... Chairman on his heels Barely a month after the Accra Metropolitan Assembly (AMA) took what many have described as one the boldest actions ever in its history, which affected hawkers at the Accra central business area, some of them are up in arms, fighting for a comeback.

Hawkers at the Derby Avenue side of the Rawlings Park, have threatened a massive comeback if the AMA does not reconsider its decision to dislodge them, since according to them, they were not originally earmarked for inclusion in the exercise.

The hawkers, most of whom are traders in footwears are protesting against what they term as the AMA and its Mayor's deliberate elusiveness and the lackadaisical attitude towards their plight, notwithstanding the fact that they are all Ghanaians.

According to them, the Mayor, Stanley Nii Adjiri Blankson, had previously assured them, prior to the Assembly's action, at a forum at the Efua Sutherland Children's Park that, their place of activity would not be affected by the exercise.

They could therefore not comprehend the prime motive and reason behind his sudden change of mind, which resulted in the action against them.

According to the irate hawkers, who said they were gearing up for the comeback action, come Wednesday, 16th march 2004, it entirely baffled them why the AMA boss, in whom they had reposed much trust, after his extensive approval of their hawking on the pavement, just upon his assumption of office, would in the same breadth go back on his own promise of shielding them at all times.

Speaking to the paper, the chairman of the Derby Avenue, Rawlings Park branch of the United Petty Traders Association (UPTA) Felix Boadi, flanked by his executives in the presence of its obviously charged youthful members, indicated that he had been told by the Mayor prior to the exercise which displaced them that, places like the Metropol, Drug, Okaishie and their own Derby Avenue lanes would not be affected by the exercise; so he even encouraged them to present him with a copy of their registered membership.

This, he said, made them harbour no fears, since they thought they had the able support of the Mayor as an organized body which could be held responsible for its actions and inactions at all times if the need arose, only for him to stab them in the back.

According to him, what beats their imagination was the fact that the other three areas, Drug, Okaishie and Metropole lanes and even those in front of the Presbyterian Bookshop are still going about their normal duties without the least threat from the AMA whatsoever.

"Are we all not Ghanaians, why this weird discrimination? Is it because most of us here are Ashantis, that we are being targeted for this purpose," he rhetorically stated.

He stressed that if that was the case, then it was quite unfortunate on the side of government and the AMA.

An angry Boadi, sounded very peeved by the situation as he said the Mayor had been very inconsistent throughout the exercise, though he had originally promised them relocation.

He indicated that most of his boys and their wares were equally stranded with their fate in limbo.

Boadi noted that but for the timely intervention of he and other ranking members of the association, the national chairman would have been lynched by the irate members who had confronted him on suspicion of 'flirting' with the Mayor.

This, he said, resulted in a heated argument, which made he and others whisk the chairman away, stressing, "he had to run away for fear of losing his life".

They therefore appealed to government and the Mayor to, in the light of the unemployment situation pertaining in the country, return them to their base, which they reemphasized was not originally earmarked for the exercise.

Meanwhile, some of the hawkers have hinted the paper that banks from which they contracted loans for the purposes of trading are now at their throats, demanding payment out of fear of losing their investments in their business.