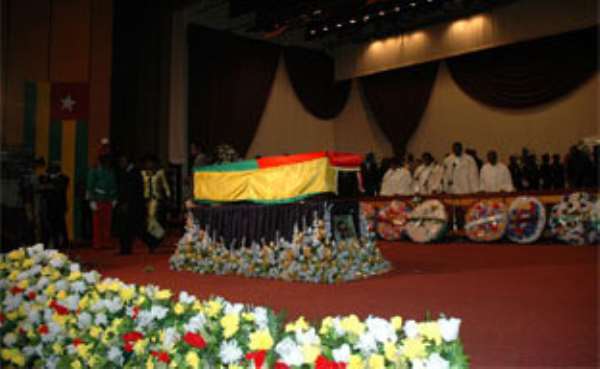 Lome, March 13, GNA - President John Agyekum Kufuor on Sunday led a five-member Ghana Government delegation to the funeral of the late Togolese President Gnassingbe Eyadema in Lome, Togo. Other members of the delegation were, Nana Addo-Dankwa Akufo-Addo, Minister of Foreign Affairs, Dr Kofi Konadu Apraku, Minister of State at the Ministry of Regional Cooperation and NEPAD, Mr Hackman Owusu Agyemang, Interior Minister and Mr Alan Kyeremateng, Minister of Trade and Industry. The city of Lome was thrown into mourning with flags flying at half-mast and supporters of President Eyadema wearing his effigy lined up the streets waving white and black handkerchiefs to welcome some of the Heads of State and Government who arrived to mourn with them. African leaders who sympathized with the Togolese were, Nigerian President Olusegun Obasanjo who is also the Chairman of the African Union (AU), ECOWAS Chairman and Nigerien President Mamdou Tandja, President Mathieu Kerekou of Benin and President Laurent Gbagbo of Cote D'Ivoire.
Other dignitaries were, General Yakubu Gowon, former Head of State of Nigeria and his wife, President Joaqium Chissano of Mozambique and representatives from the Democratic Republic of Congo, Gabon, Morocco, Cameroon, South Africa and France.
A large crowd of mourners and sympathizers converged at the forecourt of the Togo Congress Hall where the State burial service was held and due to the size of the crowd short circuit television sets were provided for those who could not have access to the hall. Pastor Touleassi of the Evangelical Presbyterian Church of Togo conducted the three-hour service characterized by melodious and solemn music, and patriotic songs by the military, mass choirs and other groups.
It began with the cortege led by a person bearing President Eyadema's portrait, wreath bearers and the brown wooden casket containing the mortal remains draped in the Togolese colours and carried by eight military pall bearers, who placed it on an erected platform decorated with flowers.
Each of the Heads of State and Government as well as the representatives of the various countries laid wreaths, signed a book of condolence and exchanged greetings with the bereaved family. The bereaved family members, Madam Badagnaki Hubertine Eyadema, widow, Mr Faure Gnassingbe, son and Mr Yahya Malu, a brother of the deceased and Mr Abass Bonfo, Deputy Speaker of the Togolese Parliament received the greetings.
The family, the Togolese Parliament, Security agencies and the clergy read tributes.
The body of President Eyadema was later buried at his hometown, Pya.
President Eyadema, 69, died on Saturday, February 5, as he was being flown to France for urgent medical treatment.
Africa's longest-serving ruler, the late President Eyadema ruled Togo, a former French West African colony, since 1967 when he rose to power in a military coup.
He was then elected three times in multi-party polls, the last in 2003 after amending the constitution.
Born to a peasant family in northern Togo, the late President Eyadema helped bring down post-independence President Sylvanus Olympio in 1963 before launching his own coup d'etat four years later against Nicolas Grunitsky.
A General who rose through the ranks of the French colonial army with stints in Benin, Indochina, Algeria and Niger, he was awarded the Legion d'honneur, France's highest honour.
Shortly after the announcement of President Eyadema's death, the Army announced that his son Faure Gnassingbe was taking over, a move that was contrary to the constitution, and denounced as a coup by the African Union (AU).
The Army said that the absence of Speaker Fambare Ouattara Natchaba from Togo at the time of the death was the reason why it had decided to hand power to his son, who is 39.
Faure has since stepped aside as Togo's interim President and announced his intention to contest the Presidential polls scheduled for next month.

Plan by gov’t to purchase new presidential jet is to satisfy...
6 minutes ago