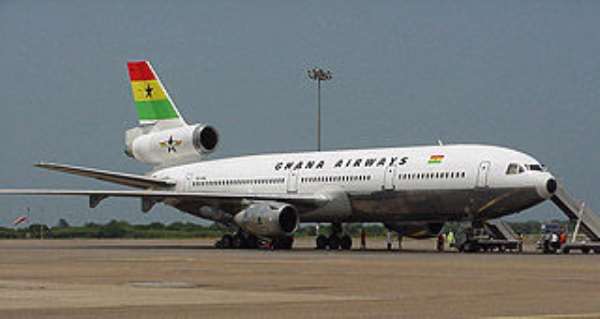 ... After Its Demise at the hands of NPP

'Ghana Palaver' Intelligence has learnt that four representatives of the Government of Ghana were sent to Rome, Italy, two weeks ago on a mission to negotiate for a DC10 aircraft. They were paid a total of US$17,000 as T&T for the one-week stay.

Our source could not reveal whether they were acting for the bankrupted and defunct Ghana Airways or the yet-to-be-in-the-air Ghana International Airlines (GIA), an airline whose details are shrouded in secrecy and mystery except for the fact that it is owned by the Mormon Church of Salt Lake City, Utah, USA.

President Kufuor and Dr. Richard “Condom Free” Anane, Minister of Road Transport, also appear to know quite a bit about the airline.

Our source hinted that the money for the air fare and the T&T for the four negotiators came from the only money earner left of Ghana Airways – Ground Handling – and that is at a time when those workers are still unpaid and hungry but are nevertheless working to cater for all flights landing in Accra.

Our source also calculated that with the demise of Ghana Airways, revenue lost to state agencies such as the Ghana Immigration Service and the Customs, Excise and Preventive Service (CEPS) and private organisations such as the Ghana Traders Association run into millions of dollars and billions of cedis. He wondered why workers of these organisations had all kept mute, and suspected that it might be due to the culture of fear that the Government has instilled in Ghanaian workers who are afraid of either being asked to “proceed on leave” or being dismissed outright.

Our source is of the view that if the NPP Government had the welfare of the workers at heart, at least the lucrative West Coast route, over which Ghana Airways had a near-monopoly, could have been maintained, given that Ghana Airways had the pilots, the staff, the planes and the overflight and landing rights.

Our source lamented: “GIA and Honourable Minister of Transport can never recoup what they have caused to be lost. We had a good thing that had a few problems but what business is never in the red at one time or another? A good shake up with a strategic partner who could have taken control of staff employment would have kept things going. We have killed the goose that laid the golden egg”.

It will be recalled that in our issue Vol. 11 No. 40 of Friday, March 4 – Thursday, March 7, 2005, we revealed that the GIA has only two staff, both Mormons from the USA, who have been lobbying Ghanaian Companies to invest in the Airline having failed to find any international investors for the Airline except Ethiopian Airlines who will even only invest if they can have the very lucrative Accra-Baltimore and the Accra-New York routes to themselves.