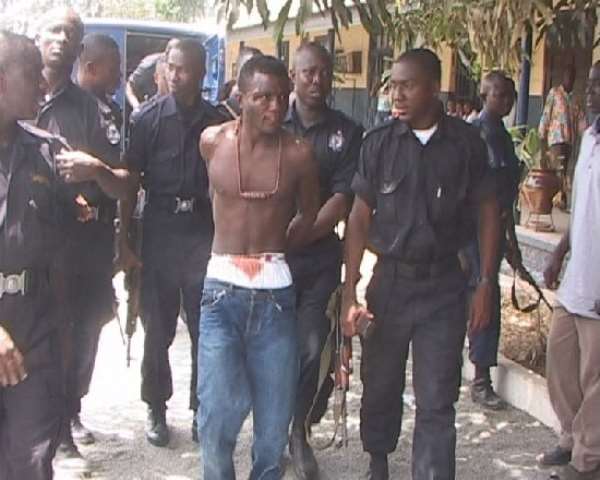 PARLIAMENT LAST TUESDAY witnessed a rare occasion of vetting two ministers for the same ministry with strong divergent opinions on the death penalty and whether it should apply in cases of hardened criminals such as the notorious armed robber, Ataa Ayi, who was recently arrested by the police service.

The two, Hon. Emmanuel Owusu-Ansah and Mr. Joseph Ghartey, both appeared before the Parliamentary Vetting Committee as nominees or deputy ministerial posts of Attorney General and Minister of Justice, and both shared their legal views on the subject of capital punishment, in the wake of the arrest of the notorious armed robber, Ataa Ayi, by the police administration

During his turn, Hon. Owusu-Ansah who appeared before the committee barely a week ago advocated capital punishment for suspected criminals such as Ataa Ayi, arguing that such capital punishment should go a long way in curbing the rate of serious crimes such as armed robberies.

He said he did not share the belief that armed robbers were better kept in custody without the possibility of parole and that the death penalty, in his view, serves as a deterrent to certain crimes.

But exhibiting a strong sense of conviction during his appearance yesterday, the second nominee for the deputy ministerial post for the A-G's department, Mr Joe Ghartey, said no one, including the State, should kill anyone in pursuit of justice since it was only God who had the prerogative to take human life.

The nominee told the Appointments Committee that he did not believe in the death penalty for any type of crime, including armed robbery, because of the sanctity of life.

Analysts have argued that the differences in the position of the law gurus, as well as their boss, could largely influence the State's position in the case(s) expected to be brought before notorious criminals such as Ataa Ayi and a gang of other equally hardened criminals who are alleged to have been terrorising the people of Kumasi and others parts of the country.

Speaking on the need for the separation of the A-G's Office from that of the Ministry of Justice to ensure the independence of the A-G's office so that the office was not used to prosecute political enemies, Mr Joe Ghartey said the Constitution had guaranteed checks and balances.

He said selective justice and persecution of political opponents by an A-G should not be the basis for the separation of the A-G's office from the Minister of Justice because the courts were there to deliver fair judgements.

On the need to amend the law on causing financial loss to the State, the he said it was not necessary since one could only be convicted if the ingredients of wilfulness, malice and fraud were established against the offender.

Ghartey said he would assist in ensuring that delays in prosecuting cases and issues surrounding missing dockets were minimised.

On his views about what should be done with petitions brought before the Appointments Committee, the nominee said it would be all right if the Committee brought petitioners before the Committee to be cross-examined.

Dr Charles Brempong-Yeboah, Deputy Minister-Designate, Ministry of Manpower, Youth and Employment, when he took his turn, said there was the need to bring in private participation to lead in the management of water delivery because of the many challenges facing the sector.

He said the World Bank had offered a grant of $103 million to assist in the private sector participation in water supply programme. On youth unemployment, he said in 2001, the Government registered close to a million people and so far, some 350,000 people had been trained in various skills with some receiving micro financing to help them to establish businesses.