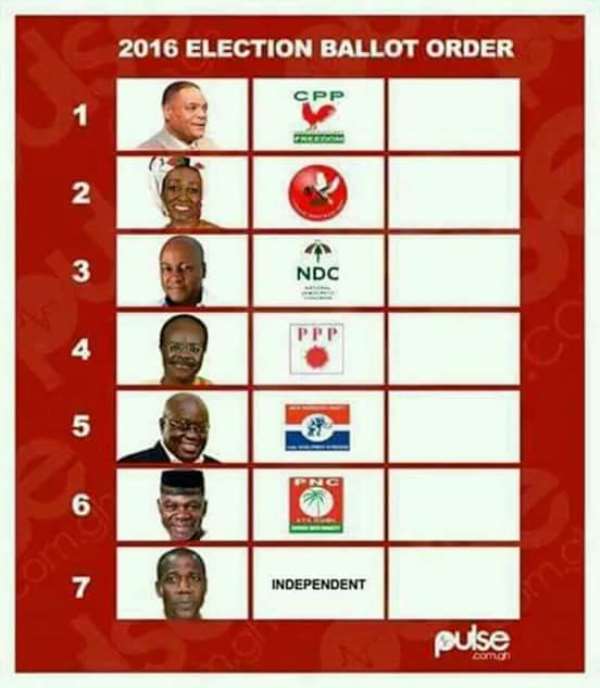 Perception is as powerful as the truth and it works magic on the Brain so when perception materializes into reality you can imagine how quick the Body will accept it as a confirmation of the perceived truth.

Electoral Commission of Ghana is the only Body mandated to organize elections and declare the president of Ghana and no matter how Bad you hate the chairperson there is nothing you can do about it. I have therefore been against the fact that people keep insulting her and accusing her of Bais simply because that wont remove her from the Chair moreover if after you have denigerated her and she declares you the winner how credible would you want us to take that declaration.

Looking at how close the 2012 election was should tell us how polarized we have become as a nation you will therefore expect whoever assumes that Chair to be circumspect in whatever he or she does since the least oversight could denegrate into Chaos.

When this new EC Chair assumed office the First Party that accused her was the NPP to the extent that One of their sitting MPs Kennedy Agyepong said unprintable words about her which some of us felt was irresponsible and unnecesary but he came back to casualy apologize.

Now when the parties presented their forms for vetting there was this perception that she wanted some particular parties out so when the final list was publised and those perceived parties were eliminated it only confirmed that perception people had and it took the Supreme Court to make her reconsider her entrenched Position and reminded her of the fact that nobody is above the law.

In Elections the ballot paper is the most important tool and any miscomunication on it could cost any political Party dearly since most of the voters are illiterates thanks to the politicians. They therefore have to take their time in educating them on how and where to thumbprint on the sheet. Some even create terms and songs like Hi5, John 3:16, Esuruho and Asi3ho just to make sure their supporters get it right when they enter the ballot Box.

Logos therefore play a major role in such exercise so when NPP complained about their logo have been tempered with and that their initials had been omitted I felt very dissapointed in the EC since that only confirmed or materialized the perception of Bais.

Take a closer look at the samples online and you would realize that the only clear logo is that of the NDC in fact the umbrella stands tall and it is just too obvious to miss even though the Resolution for Computer and print out differ. If you look at the NPP logo the elephant is not outstanding which i will not blame the EC but the Party BUT the initials being omitted!! the EC must take the full blame.

The explanation that the Party endorsed mediocrity therefore you followed suit is a complete sign of incompetence.

Avoidable mistakes like writing PPP reciepts and mixing Words and Figures should not be tolerated.

Elections is no childs play and therefore suspicions and misconceptions play a major role we therefore dont need an EC that will confirm those suspicions since it will only lead us into chaos considering the tension in this years elections. No human being or Institution is perfect BUT lets all work hard to attain some perceived Perfection.

Lets all go out on the 7th of December and cast our vote peacefully with an EC doing its work deligently since the only country we have is Ghana.