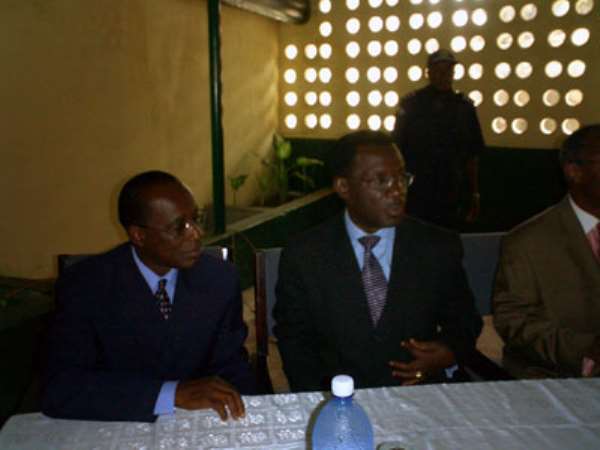 The Governments of Ghana and Sierra Leone have signed a Memorandum of Understanding under which the Ghana Ports and Harbours Authority(GPHA) will offer technical assistance to the Sierra Leone Port Authority(SLPA) for the rehabiltation and development of the Freetown port. PIC: Prof Ameyaw-Akumfi and H.E. Blay-Amihere at the signing ceremony The signing of the Memorandum of Understanding which took place last Wednesday, March 9, 2005 in Freetown is a follow up to an earlier one signed between the GPHA and the SLPA last year for co-operation between the two ports.

Under the agreement, GPHA has seconded Mr. Nestor Galley, Director of Takoradi Port to SLPA as General Manager for a year and will also send experts to assist in the transfomation process of the Freetown Port.

The Minister for Harbours and Railways, Professor Christian Ameyaw-Akumfi signed on behalf of the Ghana Government whilst the Chairman of the National Commission for Privatisation, A.R. Turay signed for the Government of Sierra Leone. Government.

Speaking at the ceremony, Professor Ameyaw-Akumfi said the decison of the Ghana Government to offer technical assistnce to the SLPA was a fine example in South-South co-operation, adding that the time is ripe for African countries to give meaning to integration through the exchange of experts and increased trade among ourselves.

Professor Ameyaw -Akumfi paid tribute to the contribution of Sierra Leone through Fourah Bay College to the training of African professionals and scholars in the past.

According to him, many West Africans including Ghanaians can trace their personal development to Fourah Bay College. He said the best thing that other West African countries like Ghana can do to help post-war Sierra Leone is to offer assistance and co-operation where they enjoy comparative advantage.

The Chairman of NCP, Mr. Turay thanked the Government of Ghana for its kind gesture and praised Ghana's High Commissioner Blay-Amihere and his counterpart, Sierra Leone's High Commissioner to Ghana, H.E. Allie Bangura for their role in bringing th two Port Authorities together.

In a statement at the signing ceremony both the Ghana High Commissioner and the Sierra Leone High Commissioner noted the significant growth in relations between Ghana and Sierra Leone under the Presidencies of His Excellency John Agyekum Kufuor and His Excellency Alhaji Dr. Ahmed Tejan Kabbah and pledged to work harder towards the strenghtening of the bonds of friendship between the two countries.

In an earlier meeting with the Head of State of Sierra Leone, President Kabbah, Professor Ameyaw-Akumfi stressed the need for African countries to seek our economic indepedence through co-operation and expressed the hope that what Ghana and Sierra Leone have been doing in the last four years will show the way forward.

For his part President Kabbah said the dream of the founding fathers of ECOWAS was to see the day that countries in the sub-region would work closely particularly in the economic field.

He said his Government is fully committed to West African integration and the ideals of the African Union.

The Government of President Kabbah has since the formal ending of the 10-year rebel war in Sierra Leone has been engaged in the difficult task of rehabiltating many infrastructures and institutions destroyed by the war.

One of the institutions that has been targeted for re-organisation is the Sierra Leone Port Authority. The new Ghanaian General Manager, Nestor Galley said he saw his secondment as a national assignment and promised to do his best to ensure that the Freetown Port operates efficiently and successfully.