Election 2016: A Choice Of Competing Capabilities In Leadership 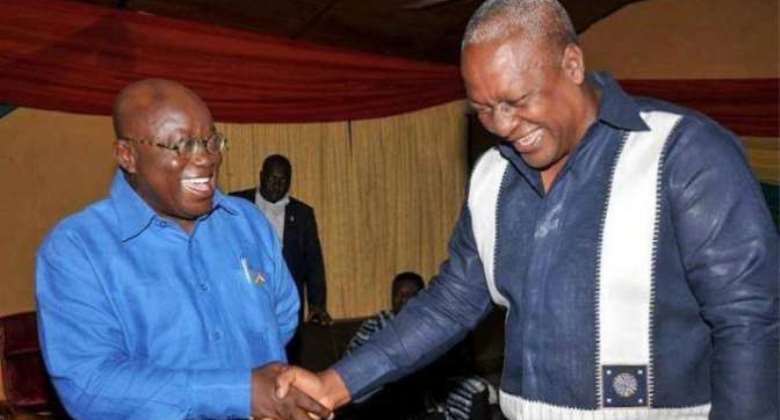 On December 7, 2016 Ghanaians will be called upon once again to make a decision to elect a President for the nation. In essence the decision would revolve around a choice between an Akuffo Addo/Bawumia leadership and a John Mahama/Amissah Arthur leadership for Ghana going forward since they lead the majority parties in Ghana. The decision for Ghanaians is a practical one which should be based on the ability and capacity of either ticket to manage, govern provide solutions and essentially deliver progress beyond where the country has reached now. The issues that should impact this decision for Ghanaians are essentially as follows:

The answer to these pertinent questions obviously leads us to the profiles and capabilities of the two leadership camps that are on offer to the Ghanaian electorate come December 7, 2016. The profile of the Akuffo Addo/Bawumia ticket can be examined from their background that transcends their years in governance and politics. Akuffo Addo has been involved in Ghana’s politics and governance for quite sometime, and thus has a background that is not new to the average Ghanaian. His profile spans many years of political activism and participation in governance at the level of Member of Parliament for twelve years, as a prominent member of the Kuffour administration for eight years, and as flag bearer of the NPP since 2007. His ability to solve national problems and manage governance issues should therefore be examined from these periods that he had the opportunity to demonstrate his so called spectacular leadership and visionary qualities to Ghanaians.

It is a known fact that as a Member of Parliament for Abuakwa and Minister in the Kuffour administration, he failed to demonstrate any superior leadership qualities that renders him capable of resurrecting a comatose country as he would want Ghanaians to believe. Besides his leadership qualities have been put to real test recently since becoming the flag bearer of the New Patriotic Party in 2007. Under his watch as leader of NPP, the party has been transformed from a once healthy and upbeat NPP left by Kuffour into a party that is fractured and limping on one leg going into election 2016. With this profile and background, Akuffo Addo obviously lacks the capability to resurrect a comatose country or manage the fairly healthy and upbeat country that John Mahama has nurtured.

In a related context, the profile of Bawumia, his running mate is largely based on his stint as deputy Governor of Bank of Ghana which was highlighted by his deep involvement in Ghana’s controversial currency redenomination exercise. Indeed not only is the true cost of the redenomination exercise that he championed under scrutiny, but more importantly Bawumia has failed to explain to Ghanaians what the true value and benefit of the whole exercise was to the Ghanaian economy. What were the true economic fundamentals that underpinned merely removing zeros from Ghana’s currency denominations?

Furthermore Bawumia’s penchant for spewing untruths-as demonstrated in his unsubstantiated claim that Togolese nationals have saturated Ghana’s voters register -has dented his credibility, and likewise dented the credibility of the Akuffo Addo ticket. His agenda to aggressively urge his northern kinsmen to replace their sitting President for a government in which the highest position for northerners would be a Vice President is real food for thought for northern voters in election 2016.

Juxtapose the above profile of the Akuffo Addo/Bawumia team with that of the Mahama Amissah Arthur team, and what you get on the other side is John Mahama who has a rich background and experience in governance that Ghanaians can count on to either resurrect a comatose country or progress a fairly healthy one. An experience that transcends his period as a Member of Parliament, Deputy Minister, Minister, Vice President and President of Ghana. A background and experience nurtured and invested in by Ghana, that is much better suited to either resurrect a comatose country or progress further a fairly healthy and upbeat rising star of Africa (Ghana).

President Mahama’s leadership qualities and ability to solve problems are tried and tested with flying colours as evidenced by his superlative performance in government. This is evidenced in numerous positive benchmarks achieved in Ghana by the Mahama/Amissah Arthur government in the last four years, be it in education, health, security, the economy, governance, foreign affairs, energy, agriculture, roads and highways and job creation. His leadership qualities have been further demonstrated in his relationship with his party the NDC, which is like day and night when compared to Akuffo Addo’s handling of NPP affairs.

The Akuffo Addo /Bawumia tickets has equally been tried and tested under various circumstances in Ghana. However the Akuffo Addo/Bawumia team has no significant history and record of providing solutions to problems in governance when offered the opportunity. The Mahama/Amissah Arthur team on the contrary has a demonstrated profile and history of problem solving qualities in governance, be it as regards the energy crises, Ebola crises, foreign affairs, gender affairs, the economy, corruption, education, compassionate leadership you name it.

The choice for majority of Ghanaians going forward should therefore be an easy one.

After identifying problems facing the country - which is the easy part - selecting the right leadership capable of solving the problems as identified would be the key decision that Ghanaians would have to make.

An ability to rehash perceived problems facing Ghanaians is certainly no guarantee of a capability to solve problems as identified in the country. It is the profiles and capabilities of the two competing leadership camps that would determine which of them is capable of delivering the goods for Ghana going forward.

Does Akuffo Addo have the leadership pedigree that President Mahama possesses and has extensively demonstrated within the last four years in governance? Certainly not. He is yet to demonstrate to Ghanaians any serious management and leadership qualities despite being offered the opportunity in various situations over the years.

The issues confronting Ghanaians going forward require leadership of a very high caliber and quality. The choice between President Mahama and Akuffo Addo is therefore clear and obvious. Ghana requires leadership that is focused, sincere, honest, tolerant, disciplined, visionary, tried and tested and compassionate going forward. Leadership that has a true grasp of the current state of the nation Ghana, and has the capability to carry on from the undeniable positive foundation that has been achieved at this stage in the nation’s history is what Ghanaians require.

An ability to reharsh problems confronting the nation and preach doom and gloom is certainly not what is required to move Ghana forward at this stage. The leadership capabilities required for Ghana going forward makes President Mahama the obvious choice over Akuffo Addo come December 7, 2016, and Ghanaians would definitely re-elect him rather than gamble with their destiny come December 7, 2016.