23 Farmers Celebrated In Sagnarigu District Of The Northern Region 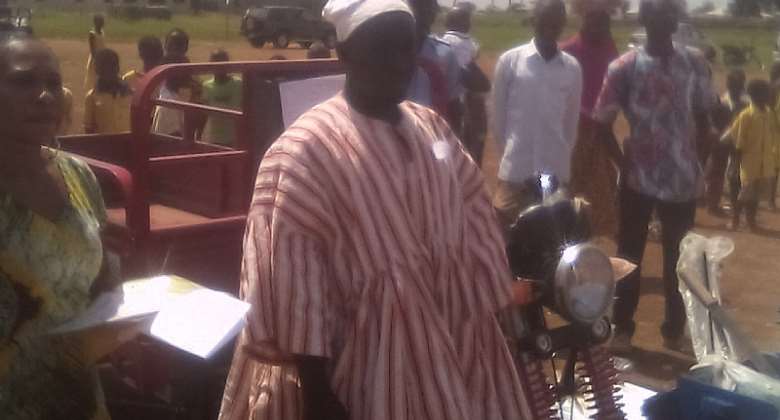 The work of twenty-three (23) farmers in the Sagnarigu district of the northern region were appreciated as part of the 32nd National Farmers Day Celebration in the district.

In his speech, the District Chief Executive or DCE, Alhassan Mohammed Sorogu-doo thanked farmers in the country for their immense contributions to the national development.

" The clock kept tickling and today we have assembled here to commemorate the 32nd anniversary of a unique day in the lives if our farmers who have contributed and keep contributing significantly to sustain our lives through the development of agriculture in particular, and the socioeconomic development of the district and Ghana at large. He stated.

The theme for this year's celebration "Agriculture; a business response to economic growth" according to honourable Mohammed Sorogu-doo was appropriate more especially at this time when agriculture has moved beyond only food but a practice as a business.

He lauded government for it's contributions towards the enhancement of agriculture in the country to the improved technology.

"Ladies and gentlemen, in recent times, the increase of food production has been more possible due to the various kinds of technology made available by government and other agencies as part of share Growth Policy of the NDC government" he noted.

"These interventions include the availability and use improved seeds, agro chemical, organic and inorganic fertilizers and good lands management policies" he added.

He also said government through its partner organizations ; Resiliency In Ghana (RING) distributed five hundred and seventy ruminants to a hundred and forty women in five communities during the 2016 crop season.

He used the occasion to call on the youth to venture into agriculture especially now that it's not more for only subsistence but a way of business.

Mr. Mohammed Sorogu-doo also called on Ghanaians to be peaceful and work towards achieving it, adding that, Ghana is the only we have and stand to suffer should we disturb the peace we enjoy today.

In all one Alhassan Mohammed, a 45 years old farmer from Wayamba, a community under the district was adjudged the district best farmer and went home with a tricycle known as motor king donated by the NDC's parliamentary candidate for Tamale North constituency, Alhaji Alhassan Suhuyini, two bags fertilizer, a box of roofing sheet, a cutlass, knapsack, processor and a pair of farm boots, with Ibrahim Barikisu from Kasalgu also won the district female best farmer of the year.