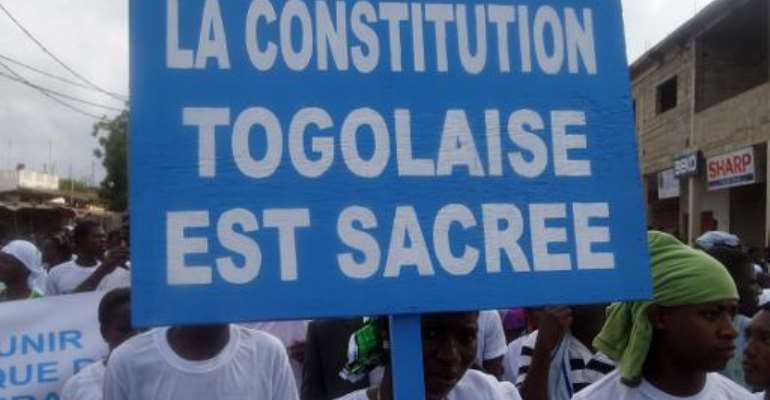 A demonstrator in Lome last week holds a banner reading "The Togolese Constitution is sacred". By Emile Kouton (AFP/File)

Lome (AFP) - Togo's opposition on Thursday called for a large-scale protest to demand political reforms before next year's elections but commentators warned against seeing it as another Burkina Faso.

The eight-party Combat for Political Alternative in 2015 (CAP2015) alliance made the call for "the people of Lome and nearby to come out in huge numbers" at a rally on Friday.

The planned protests come a week after police in the capital teargassed opposition supporters who defied government orders not to march on the national assembly building.

The opposition has been pushing for a change to the country's constitution, which would limit a president to two, five-year terms of office. There is currently no limit.

But two-term President Faure Gnassingbe this week ruled out any change and said that the constitution in force would be upheld. Lawmakers had previously rejected a reform bill.

Presidency spokesman Essodeina Petchezi, offered a softer line on Thursday, telling AFP that while Gnassingbe is committed to enforcing the existing constitution, he is not "hostile to reforms."

Lawyer Raphael Kpande-Adzare, head of the Togolese Human Rights League (LTDH), said that political reforms were "a democratic imperative", not "a favour".

Gnassingbe should make "a patriotic leap to implement the political reforms and avoid a return to the bad old days".

The president took over from his father, General Gnassingbe Eyadema, who died in 2005 after 38 years in charge of the West African nation.

The opposition disputed Faure Gnassingbe's election wins in 2005 and 2010 and have long called for institutional and political changes to be made, so far without success.

CAP2015 is backing the leader of the main opposition National Alliance for Change (ANC), Jean-Pierre Fabre, to challenge Gnassingbe for the presidency.

The president has not yet announced his candidacy but asked directly on an official visit to Ghana on Tuesday, did not rule out standing again.

Observers have been watching events closely in Togo after popular protests over the constitution toppled the leader of Burkina Faso, the country's neighbour to the north.

Placards at last week's protests called for an end to nearly 50 years of rule by the Gnassingbe family, drawing comparisons with the long-serving presidency of Blaise Compaore in Ouagadougou.

Compaore's attempt to change the constitution so he could stand for re-election next year led to his ouster at the end of last month, after 27 years at the helm.

But according to Gilles Yabi, a specialist in West African politics, the Togolese context is different from that in Burkina Faso.

In addition, Togo's opposition, grouped together under three separate coalitions, remains split and struggles to speak with one voice on the matter.

Gnassingbe's government "is not as weak as in Burkina Faso", added Yabi, pointing out that his administration enjoyed wide support in his northern homeland.

The army and security forces remain "highly controlled" by the government, even though the same was said of the Burkinabe army before it abandoned Compaore, a former soldier.