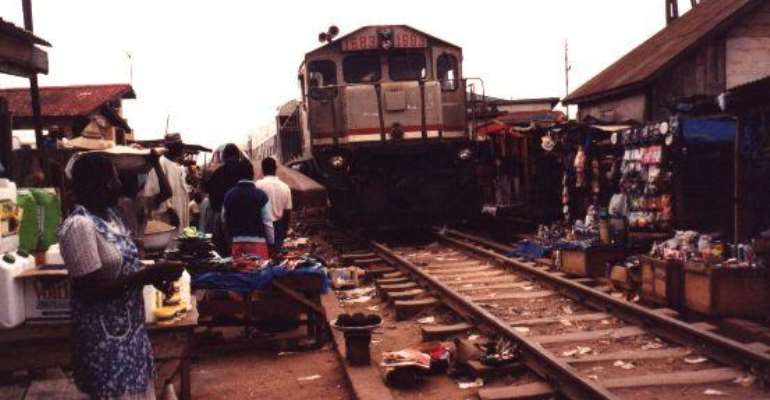 .... cites favouritism, improper conduct The chairman of RAILNET, a Ghanaian railway-engineering firm, based in London, Mr. Bruce Anim-Annor, has protested vehemently against the government decision to reject his company's bid to run Ghana Railways on concessionary basis, as was advertised.

Speaking to The Chronicle via phone from his London base last Thursday, Mr. Annor said though his company offered the highest bid of $32 million to take over the GRC, the government, for reasons known to itself, had decided to reject the offer and instead short-listed Spoornet, a South African Company, and United Rail, also a foreign company, because some leading members in government were allegedly leading them.

According to him, the above companies had offered ridiculous amounts of $16 million and $600,000 respectively, payable within a 20-year period, but the government had thought it wise to short-list them and ignored RAILNET, which is owned by a group of Ghanaian railway engineers in Europe, who had also come out with a good offer.

He expressed his disappointment over the way the government of Ghana thinks that it was only the white people who could run companies being divested in the country, and always ignored Ghanaians.

Annor noted that looking at what happened with Telecom Malaysia, who took the government to the international court to claim several millions of dollars in compensation, one would have thought that our government would look before they leap, but he said they seem to have learnt nothing because a few people in government were probably enjoying kick-backs.

Annor further told The Chronicle that they and their financiers were going to invest about $125 million in Ghana Railways within the next five years, apart from the $32 million they offered, and also retain the over 4,000 strong work force, but “our government did not see this as a good offer and had rather gone for people who are not bringing in any investment.”

According to him, information they have gathered indicate that the government was going to meet the aforementioned companies who have been short-listed on March 12, this year to decide who takes over the GRC at such a cheap price.

He vowed that as Ghanaians, they would fight till they dropped dead to make sure that the GRC had been given to them and not foreigners who are going to mine it as gold and leave the scene.

Giving background information to the whole story, Mr. Annor said following an advertisement placed in the media about the intended divestiture of the rail lines, they, the Ghanaian railway engineers, based in Europe, decided to put in their bid to take over the company to help build their own country.

He said in the bid document, they were asked to deposit a bid security of $250, 000, which would be refunded to them after 180 days.

According to him, they had made it clear that they could not provide the money since it was against modern day business practice to keep an investor's money away for such a time without payment of any interest.

RAILNET therefore decided to deposit the money for only one month with the assurance that the $250,000 would be paid if they won the bid. He said they concluded everything and submitted their bid on March 31, last year.

He continued that after the submission of the bid, they read on Ghanaweb on September 17, the same year, that a minister in government had allegedly taken a bribe of $5million to help one of the bidding companies.

He said they did not take the news seriously, but latest development was making them believe the allegation because he did not understand why they should offer such a high price, yet the government had decided to ignore them and gone in instead for those who offered a cheap price.

Annor reminded that Ghana belonged to all of us, as such his company would not pay any bribe to a minister of state to win what was supposed to be for all of them.

According to the 74-year-old Annor, the story he had narrated was a clear manifestation that our government was trying to kill the initiative of Ghanaians by always thinking that the white man was better than they were.

He noted that if the company had been given to them, they would have transformed our rail system and made it comparable to those seen in any part of the world, with good express train service linking Accra, Kumasi and Takoradi.

Mr. Annor, who promised to come down soon to pursue the case, said if, as engineers, they were working to help other countries develop their rail system, he did not see why they could not do the same for their own country.