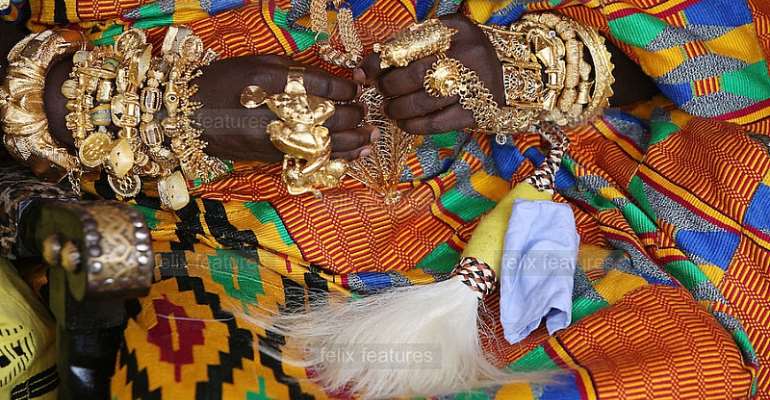 “Maybe, before he exits power, he will still decide not to pay us compensation. Nonetheless he will go. He has no choice but he will go” – Nana Ansah Asiedu, Gyaasehene of Abotoase.

The sages say coming events cast their shadows. The wind of change is blowing like Monsoon, a wind that changes with the season. It is becoming hotter and hotter everyday. If this statement quoted above had been made by a chief from the Eastern, Ashanti, Brong Ahafo or any other region apart from the Volta Region, I would not have been surprised. For a chief from this region which the NDC says is their world bank to have made this pronouncement, I am sorry the tide has changed and surely change is definitely coming.

What the NDC people do not know is that human mind is dynamic. They started playing the tribal card but it fell flat because Ghanaians have gone far beyond such foolishness. In the run-up to the 2012 General Election, John Mahama went to the Northern Region to tell the people there that they should vote for him because he is a Northerner. It did not occur to him that the running mate of Nana Addo, the irrepressible and versatile Dr. Bawumia is also a Northerner.

Recently he went to Nkoranza in the Brong Ahafo Region during his campaign tour and told the people over there that his wife hails from Nkoranza so they should vote for him. Kufour's wife, Madam Theresa Kufour hails from Odumase in the Brong Ahafo Region but we never heard him telling anyone that because his wife is from the Brong Ahafo Region, the people there should vote for him. Similarly, Madam Rebecca Akufo Addo hails from Ga but we have never heard Nana saying that the People of Ga should vote for him because he is married to a lady from Ga. Nana Konadu Agyemang Rawlings is a royal from Ashanti but for the eight years that Rawlings ruled this country as a democratically elected president, he never told the people of Ashanti Region that they should vote for him because his wife is from the Ashanti Region. Naadu Mills is a Ga lady but when the late Professor Mills was campaigning he never told the people of Ga to vote for him because his wife is a Ga royal. When we are talking of issues, Mr. Mahama is talking about marriages. No wonder he has many children out of wedlock. That is why the sages say a drowning person would grab a snake crawling on the shore in his attempt to survive. Mr. Mahama has seen defeat staring him in the face so he is talking as if he has offended a mighty deity. A desperate candidate is on the prowl and that is dangerous.

In 1992 when the then Presidential Candidate of the New Patriotic Party, Professor Adu Boahen went to campaign in the Volta Region, hell broke loose. Anywhere he went, people hooted at them and pelted his convoy with stones, and sticks. In fact, Professor Adu Boahen had to run away to save his dear life. He never returned to the region again till the elections. In 1992, the people of the Volta Region voted massively for J.J Rawlings and his Parliamentary Candidates. It was not surprising because the NDC had gone round telling the Voltarians that some years ago, Mr. Victor Owusu who was the Presidential Candidate of the Popular Front Party, an offshoot of the United Party said the Voltarians were “tribalistic inward looking people”.

Enter Nana Akufo Addo in 2008. Nana too traversed the Volta Region with his message of hope and appealed to the conscience of the people to change because from what Mr. Kufour did to them in terms of developments, he will never hesitate to follow the footsteps of Mr. Kufour. Nana too did not win in the Volta Region but he was able to add more votes to the one won by Mr. Kufour. He again repeated the dose in 2012.

In 2004 when president Kufour was going for his re-election, he did not worry himself too much as president Mahama is doing. In fact, he did not need to worry because the man and his team believed they did a good job and Ghanaians gave them the nod to administer the affairs of the nation because they did their very best in their four-year term and as such deserved to continue with the good work. Before he took over the reins of power, the UP Tradition had been in opposition for three (3) decades and lost two (2) elections in 1992 and 1996. Ghanaians had lived under totalitarian regime for eleven (11) years under Jerry Rawlings. Everybody was expecting Mr. Kufour to pay back Rawlings in his own coin but the man rather concentrated on his job.

Even when Rawlings came under pressure under IMF and foreign powers to go for democracy and he obliged, the democracy that was introduced was rather a quasi military regime with the BNI and 64 battalion (Commandos) stalking the land and brutalizing people. So in 2000 when the wind of change started blowing, no one could withstand the speed of the wind. When the result of 2000 general election was announced and Kufour won in the first run, then candidate Prof. Atta Mills had no choice but to accept the result. After all, it was the will of the people and as the sages say, the voice of the people is the voice of God.

In my mind's eye I could see the same wind blowing at even a faster speed than it blew in 2000. The NDC will surely lose this election but they will not lose without fighting. That is why the president and his wife are on the campaign trail, flying in helicopters while the vice president, the chief of staff, the general secretary of the NDC etc are out there barking and shouting their voices hoarse while their attack dogs make ugly noises on radio and TV stations.

The only weapon left in the hands of John Mahama and his team of corrupt, inept and incompetent ministers and apparatchiks is to intimidate in order to bulldoze their way to power if even Rome will burn. They are aware of what awaits them when the NPP takes over power and so they will do everything, including human sacrifice to cling on to power. But do you know what? We are not going to allow that.

ADOPT A POLLING STATION STRATEGY
Whosoever muted this idea to the NPP needs to be congratulated. If matters are left into the hands of regional, constituencies, polling station executives and Parliamentary Candidates on the day of elections, things could turn against the NPP. In these crucial elections, you don't know whom to trust. The war chest of the NDC is over flowing with stolen money and they will use it to their advantage having impoverished Ghanaians. A polling station agent can easily be bribed. As for electoral officers it is so easy for them to do the bidding of the ruling party for a pittance. That is why yours truly is adopting the polling station where I cast my vote. What I am going to do is that I will commission my wife to slaughter four of my fowls and make a sumptuous stew, cook rice, kenkey and ampesi on the day of election. As early as 5.00 am my polling station executives and polling agent will assemble in my house and take their breakfast and wash it down with a cold soft drink.

I have adopted my polling station. What are you, my dear and cherished “preacher of change” going to do on the election day? There is this rich businessman whose business is collapsing. He has told me that he and his family members as well as his workers will vote against the John Mahama led administration. When I sold the idea of adopting a polling station he offered to adopt ten (10) because according to him it is the only thing he can contribute towards victory 2016 for Nana and Bawumia to come and change his fortune. And in the morning after the change, we can only sing Hallelujah!!!

The author has 97 publications published on Modern Ghana.

CEO Of Travel Bureau Limited In Court For Stealing, Forging ...
1 minute ago