Who Can And Who Cannot 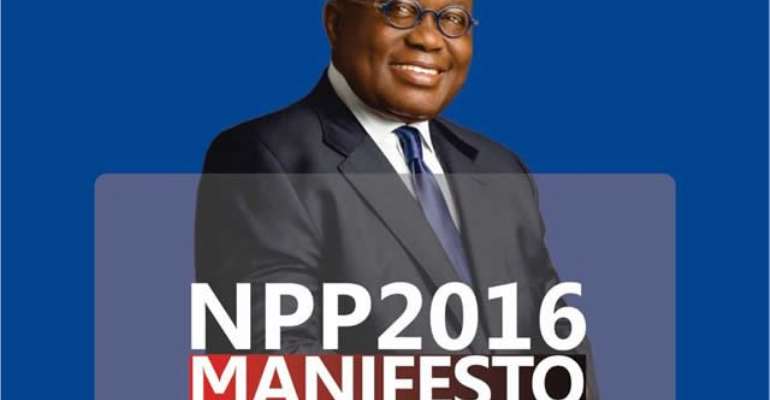 The launching of the NPP's Manifesto on Sunday, 9th October, 2016 at the Ghana International Trade Fair Centre set the stage for an intelligent assessment of the various Manifestos, especially, that of the two major political parties.  Not that the other political parties don't matter, but whether we like it or not, the political atmosphere in the country today including the disqualification of thirteen Presidential aspirants suggests without any sentiment that the battle is between the NPP and the NDC.  It is also acknowledged that some of the minor parties have put forward some brilliant ideas but unfortunately the privilege lies within the corridors of one of the two major parties to use them.  It is laughable for “Ayaricough” to say the NPP stole his manifesto but the brilliant analysis of experienced journalist Mr. Kweku Baako as to who stole the manifesto has virtually grounded Dr. Ayirigah and the matter is not worth discussing any longer except that NPP must tighten its security.

Unfortunately the “intelligent debate” I was expecting on the Manifestos has been allowed to degenerate into the usual political mediocrity and I don't know who to blame – either our radio presenters or gullible Ghanaians.  Today, the debate is not about which of the economic programmes put forward by the major parties would save the country from its present predicament but rather an infantile argument as to who can or cannot implement its programmes.  The NDC's major criticism of NPP's Manifesto is that it won't work “and it is obvious that the economic plan would destroy this economy'' says President Mahama.  Dr. Bawumia replied by asking the President “you have presided over the collapse of our economy and if you knew the plan that would work for the economy and be successful why haven't you implemented the plan for the past eight years?''  It seems issues have lost its meaning and the intelligent assessment one would have wished to take place may not happen because NDC has no serious criticisms about the NPP manifesto except to say, it won't work.

The point is that no Ghanaian has given President Mahama and his NDC any work to do.  The prerogative to form a Government solely belongs to the people of Ghana but Ghanaians don't go round searching the country for people to form a Government.  It is the political parties that seek the support of Ghanaians to form a Government to implement its programmes.  It is therefore amusing when the President goes round saying that the work Ghanaians gave him has been implemented partially and therefore he needs more time to complete the rest.  For example, Ghanaians did not ask the President to build 200 SHS but he promised that when Ghanaians vote for him he will build the schools – not with his money but with the tax payer's money.  Ghanaians must therefore understand that the election is about the assessment of the Government in power which is the NDC.  It is time the people take stock of the promises the Government made and whether it has been able to fulfil them.  If the Government has not been able to fulfil its promises it is the prerogative of Ghanaians to assess the opposition parties and vote for the Party they feel can replace the Government and if the NPP is the Party, so be it.

The NDC before coming to power through a contentious election in 2012, promised Ghanaians better Ghana Agenda but now it's bitter Ghana, to reduce fuel drastically but have increased fuel astronomically, onetime payment of NHIS insurance premium but has guillotined the programme.  Besides these unfulfilled promises, some world economic institutions have stated that Ghana's economy is not doing well, Ghanaians whose power was usurped are not only feeling the effects of the bad economic policies but are also saying that the economic situation is bad but the President and his Party say they are doing well.  Dr Bawumia was apt in advising the President to stop embarrassing himself.  From the above-mentioned, the NDC has no morale grounds to tell NPP that its plans won't work.

Throughout the developed world, countries have developed a systems or conventions to select competent people for important political assignments which include educational background, track record, experience, human relations, managerial experience and many other pre-requisites which cannot all be listed here.  In the third world however, these conventions do not exist and important political appointments are conferred on people who indulge themselves in all kinds of criminal activities such as, insults, beatings and maiming of political opponents etc. all in support of a political party with the view to share the spoils when the Party comes to power.

In Ghana, “babies with sharp teeth” earned their ministerial appointments through insults and other uncharitable activities against political opponents.  Under these circumstances, how can the Government's promises be fulfilled when those chosen to govern are experts in criminal, mischievous and fraudulent activities?  The debate as to who can implement its programme should therefore be based on each Party's track record and our present predicament is grounded on the NDC's economic track record.  The PNDC/NDC sent Ghana to HIPC but President Kufuor extricated the economy from that situation. The NDC has once again dumped Ghana in another worse economic quagmire and the next NPP Government under “President” Nana Akufo Addo will surely emancipate Ghanaians economically.

Experience in governance is very crucial for the administration of any country and criticisms serve to put the ruler on its toes but in Ghana, the President wants to be criticised by only past Presidents and that in effect means criticisms can only come from ex-Presidents Rawlings and Kufour.  We live in an interesting country indeed and the President by that statement sounds very arrogant and frustrated.  The President has also said that “Ghanaians have short memories” and that, of course, includes himself because he is a Ghanaian and has forgotten his own criticisms of President Kufour's administration when he was the NDC's Vice Presidential Candidate.

Presidential apprenticeship doesn't exist but the opportunity to serve as Vice President gives the closest resemblance.  In Ghana, the late President Mills and the current President are the only Presidents who have had the opportunity to go through such “apprenticeship”.   President Mahama told Ghanaians that the late President gave him a free hand to run the country because of his ill health but interestingly the performances of the two Presidents have been adjudged as the worst in the history of this country and thus negate the need for apprenticeship.  The NDC should stop disturbing our ears on phantom achievements which are all associated with corruption, lies and deceit and shouldn't think that Ghanaians are fools.  Abraham Lincoln said “You can fool all the people some of the time, and some of the people all the time, but you cannot fool all the people all the time.”

Whilst reading some of the Manifestos, I felt that our priorities are misplaced because no serious plans have been put in place to counter the evils in our society.  Every Party is talking about jobs, building of roads, infrastructure, schools and all but all are silent on the evils of the society.  The morale fibre of the society is very low, indiscipline has captured the commanding heights of the youth, the country's laws are broken with impunity and our sense of patriotism is lost.  All developments seem to focus on jobs, building flyovers and asphalting already asphalted roads.  Finding employment for the people obviously is a priority but what is the point finding a job for a criminal whose sole purpose for seeking employment is to steal the tax payers' money and get away with it?  This nation cannot develop without discipline and the enforcement of our laws must be considered a top priority.

Another important social evil undermining the progress of our development is the Ghanaian attitude towards TIME but no Party seems to give it the serious consideration it deserves. Any Government that can change Ghanaians' attitude and the use of time to me is the Government that will succeed in developing this nation to join the comity of developed nations.  As a nation we must acknowledge the true value of time and use it in every aspect of our national life to reduce idleness, laziness, procrastination and challenge ourselves to see whether this nation will not progress.

When a President goes begging and distributes goods to the electorates for votes using the tax payers' money, it is an acknowledgement of failure and he should abandon the ship rather than seeking re-election.  It seems the NDC is falling on its own dagger of lies, deceit and propaganda and 2016 elections will determine its fate. This nation cannot continue to live under this administration for another four years and change must surely come!