“FIRST…Let No MAN Deceive YOU!” 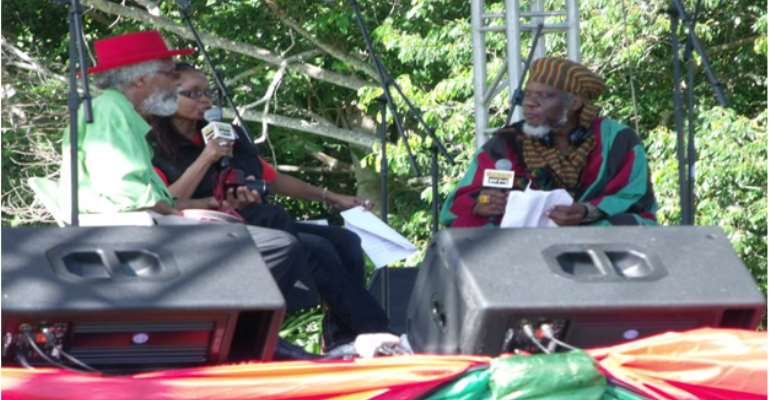 If the tone of retorts, actions and threats of further actions from all the major actors in the nerve-stretching movie-thriller called The Syrian Crisis 2016; and the sick joke of a choice being nakedly played out before our eyes, to elect the person to act as the world’s most powerful politician; if these are anything to go by at all, then, as Bob Marley has sung, “Seems like, total destruction‘s the only solution”.

Except that, both these phenomena are not movies; they’re very real and in our faces, and, combined with so many other really startling occurrences in so many places all over the world, have blown the formerly prescribed boundaries of our thoughts, dreams, fears and expectations. We seem to have come, and as best we should, to an almost daily expectation of revolutionary disclosure.

Let not the arrows shot here, therefore, be considered a mere spanner in the works of a current heightened campaign in sections of the Jamaican media, to seek support for the expunging of the criminal record of Marcus Mosiah Garvey, to use the ploy of a Jamaica National Heroes Expunge Package Deal, also including the criminal records of Sam Sharpe, Paul Bogle and George William Gordon. Instead, be patient with me, and realize that I shoot thus, “so that the scriptures may be fulfilled”. I’m merely striving to walk the logos of my journey, to follow “the Way, the Truth and the Light”, which is Jesus the Christ… The Word, which also is the spirit of prophecy.

First, permit me to establish a few fundamentals, as follows:

There are two very fundamentally important gems of instruction that The Word provides for us at this TIME; which we hereby examine as follows:

Jesus the Christ was responding to a request from some of his disciples to prophesy to them of the sign of his coming, and of the end of the world, i.e. the end of this dispensation of consciousness. Take prudent note, that, of all the ultra disturbing events and conditions afflicting so much of today’s world, Jesus placed this advice at the very top, thereby suggesting that deception would perhaps be the world’s most pervasive end-time phenomenon.

When Bob Marley sang “We are the children of the Rastaman, we are the children of the Higher One” in Africa Unite, he was not referring to dreadlocks who smoke Ganja, but was revealing that the Jamaican nation would lead Africa and the rest of the world right out of Babylon. Marley, himself a man of mixed heritage (Judah & Ephraim), and born in the same parish (St. Ann) as Marcus Garvey also sang, “Give us the teachings of His Majesty; we nuh want no devil philosophy”. Jamaica, a little island of usually about 2.7 million, through under-privileged circumstances, has astounded the world with a cluster of world champions and world records in various fields of endeavour. What should astound even more, is the deafening silence that has been accorded, especially at home, to one of Jamaica’s first and Greatest World Record; that of gifting the world with the livity and consciousness of RASTAFARI. YahMecca will lead Africa and the world back to the Almighty.

“My people suffer for lack of knowledge”…the true knowledge of themselves, and of their God, the Almighty!… (search “Jamaican Akan Root” by Dr. Christina Sinclair PhD, MSW, DCH)

What is Righteousness?...let’s take a cue from Gen.15 v 6, vis, “And he believed in the Lord; and he counted it to him for righteousness”…that is, Abraham’s conviction and commitment to The Word.

Babylon, or Egypt in prophecy at this time, represents a system of deception, sorcery, exploitation, corruption and sheer wickedness that has the majority of the earth’s inhabitants psychologically and otherwise imprisoned. This system is the one symbolized as the beast in the prophecy at Rev.13 v 18, which reads, “Here is wisdom. Let him that hath understanding count the number of the beast: for it is the number of a man; and his number is Six hundred threescore and six”

Your writer has been one to publish via “The Testament of Rastafari…Unlocking the KJV” the information that the sum total in Roman Numerals of the Pope’s Latin title “Vicarius Filii Dei”) is exactly 666; which explains the widely held view in theological circles, that the Pope is the man sitting atop this system. However, in like manner of the Kingdom of the Almighty, where the Almighty has his righteous servants placed strategic to his ordinances, Babylon System also has its servants and agents, who target the saints as their personal adversaries. The spiritual warfare is on all levels. Just imagine a Night at the Spiritual Fights, where the fight-card could read, “Almighty vs Satan”, “H.I.M. Haile Selassie I vs Marcus Garvey”, “Queen Nanny of the Maroons vs ‘Mama Pee’ Portia”, “Dr. Christina Sinclair vs Andrea ‘Kabu’ Williams”, “Ras Mandito vs Mutabaruka”; and, the feature, “Truth” vs “Pride, Jealousy & Spiritual Blindness”, all at the same time, with their ‘corners-man’ being the vastly experienced…”Deception”!

THE “SON OF PERDITION”: With the Jamaican nation fulfilling the prophetic identity of Spiritual Jerusalem, it is to be expected that the “Son of Perdition” should also come from among the Jamaican people. We now substantiate our ‘hounding’ of Marcus Mosiah Garvey with prophecies to identify him as this “Man of Sin”, a false prophet and a robber of his people, as follows:

Who opposeth and exhalteth himself above all that is called God, or that is worshipped; so that he as God sitteth in the temple of God, shewing himself that he is God.

Remember ye not, that, when I was yet with you, I told you these things?

And now ye know what withholdeth that he might be revealed in his time.

For the mystery of iniquity doth already work: only he who now letteth will let, until he be taken out of the way”.

By its own boast, IRIE FM’s founder, Mr. Carl Young had established the station with a bust of Marcus Garvey… and, especially through the agencies of “Kabu & Muta”, the rest is history. Isa. 14 v 13-14 reads, “For thou hast said in thine heart, I will ascend into heaven, I will exhalt my throne above the stars of God: I will sit also upon the mount of the congregation, in the sides of the north:

I will ascend above the heights of the clouds; I will be like the most High”

Thus saith the Lord; Though they be quiet, and likewise many, yet thus shall they be cut down, when he shall pass through. Though I have afflicted thee, I will afflict thee no more.

For now will I break his yoke from off thee and will burst thy bonds in sunder.

And the Lord hath given a commandment concerning thee, that no more of thy name be sown: out of the house of thy gods will I cut off the graven image: I will make thy grave; for thou art vile”

But thou art cast out of your grave like an abominable branch, and as the raiment of those that are slain, thrust through with a sword, that go down to the stones of the pit; as a carcase trodden under feet.

Thou shalt not be joined with them in burial, because thou hast destroyed thy land, and slain thy people: the seed of evildoers shall never be renowned”

Over the years since 1964 when a Syrian, former PM Edward Seaga, is said to have gone on a mission with others, including the famed sculptor and Kumina spiritual leader ‘Kapo’, to England, presumably to dig-up, package and take Marcus Garvey’s remains to Jamaica, I have always wondered at the exceptional Pan Africanist motivation displayed by Mr. Seaga and the Jamaican Government of the time, even to the extent of sponsoring a state funeral and thereafter declaring Marcus Garvey to be Jamaica’s first National Hero….Sorcery???.......Hmmm! But then, I also wondered why it is the same lion in the Ghana flag that is used in the emblem of the University of the West Indies, and why the pelican of the British Queen is made to sit on top of the lion in that emblem.

RESEARCH PROJECT FOR U.W.I.?: Having myself spent many years of my life being under the bewitching spectre of Marcus Garvey, I sincerely understand the plight of all my African brothers and sisters who have been similarly deceived by someone who, subject to the effective utilization of today’s research technology and facilities, could probably turn out to be the most brilliant and elaborate scammer the world has ever seen! Could this explain why scamming seems to straddle so much of business transactions and relations in Jamaica? Upon cold reflection, I’ve come to see that, to the greater extent, we all have built Marcus Mosiah Garvey, being the quantum figment of our Black Nationalist &Pan-Africanist aspirations, and, while he was yet alive, Garvey was just the perfect prospector for that. But closure is inconvenient without the TRUTH; and, at least for the sake of same, I hereby propose to U.W.I. a Research Project on Marcus Garvey & the U.N.I.A., a search for answers to the following twelve questions, as follows:

Come, the falling away certainly will…so that the scriptures may be fulfilled…i.e. ‘Garveyites’ away from RASTAFARI! “Cast ye up, cast ye up, prepare the way, take up the stumbling block out of the way of my people” Isa.57 v 14).

Meanwhile, the Almighty’s instruction to those who would be redeemed from the world this time around, remains as it has since the foundation of creation, ever since we came into our trod through this valley of the shadow of death…it is simply to “Love the Almighty, and to Love one another!”

Conversely, Prov.6 v 16-19 reads, “These six things doth the Lord hate: yea, seven are an abomination unto him: A proud look, a lying tongue, and hands that shed innocent blood: An heart that deviseth wicked imaginations, feet that be swift in running to mischief; A false witness that speaketh lies, and he that soweth discord among brethren”.

IMMANUEL I SELASSIE I RASTAFARI = 999 MARCUS MOSIAH GARVEY = 666! YahMecca, Africa and the world are full-pregnant for TRUTH, JUSTICE & RECONCILIATION….pregnant for One Rasta Love!

Author of “The Testament of Rastafari…Unlocking the KJV” search at: www.lulu.com