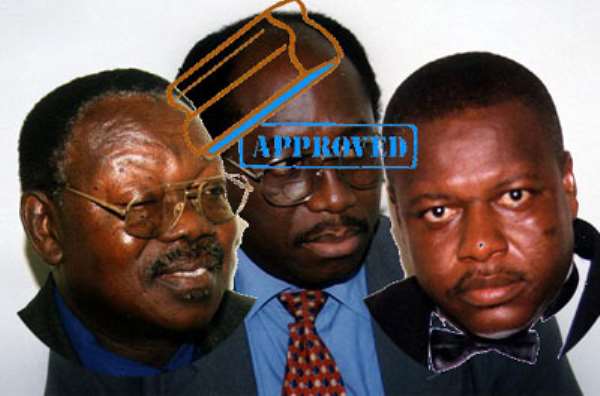 THE APPROVAL of the three dodgy ministers, Dr. Richard Anane, Minister for Roads and Transport, Hon. Sheik I.C. Quaye, "Downtrodden" Greater Accra Regional Minister and Hon. Isaac Edumadze, Central Regional Minister by the majority in parliament despite public outcry, has been described as 'arrogance of power.'

According to the Committee for Joint Action (CJA), a political grouping that is staging demonstration today, it was unfortunate that the ruling New Patriotic Party (NPP) preaches rule of law, yet does the contrary and noted that the actions of the majority demonstrate that they are intoxicated with political power.

"It is clear that the NPP government has become extremely arrogant and fallen victim to the culture of impunity. Several activities of the NPP bear the hallmark of a party heavily intoxicated with political power."

Addressing a press conference yesterday to outline the activities for today, the spokesperson for the CJA, Dr. Edward Omani Boama, the former president of National Union of Ghana Students (NUGS), stated that the imposition of new taxes on fuel prices without prior approval of parliament was unconstitutional.

The CJA questioned the rationale behind the appointment of 88 ministers. "What explains the insistence of President Kufuor to appoint 88 ministers contrary to its electoral promise and at the time when this government claims the nation needs revenue to develop? What explains the penchant President Kufuor and his ministers have for opulent life styles at public expense even as they ask the already suffering Ghanaians to tighten their belts and bite the bullet?" he asked.

Dr. Boama, who was flanked by Mr. Kwesi Pratt Jnr, the managing editor of Insight, Mr. Danny Ofori Atta, the running mate of Dr. Edward N. Mahama of the Grand Coalition, Hon. Lee Ocran, a leading member of the NDC, Alhaji Ramadan, the vice chairman of PNC and Dr. Percy of the National Reform Party (NRP), the spokesperson stated that the NPP is inimical to good governance, saying that the earlier they are called to order, the better for the nation's fledgling democracy.

According to him, no government has the right to lie and deceive the people of this country to the effect of imposing harsh economic conditions only because it has won the election. He added that the mandate that any government gets is based on the assumption that it will be honest and alleviate the sufferings of the masses.

The former NUGS President who reiterated that the demonstration is being organized on non-partisan platform, appealed to the participants (demonstrators) to desist from wearing party colours and other insignia of political parties.

"The 'wahala' demonstration is an expression of our democratic and constitutional right to protest against bad governance and increasing hardship. We have taken all measures to ensure that it will be peaceful. The CJA is co-operating with the police to ensure peace, law and order during and after the demonstration," he pledged.

He dismissed assertions by the NPP that all is well. "All is not well in Ghana as the NPP government wants us to believe. The truth is that Ghanaians are suffering. School fees, transportation, rent, electricity and water bills and the general cost of living have now become so unbearable," he pointed out.

The spokesperson who described the actions of the NPP as undermining confidence in democracy, said the NPP makes electoral promises and breaks them with impunity.

He reiterated that the measures announced by the government to mitigate the effects of fuel price increases are at best cosmetic; noting that the NPP is not being sincere with Ghanaians as far as the economy is concerned.