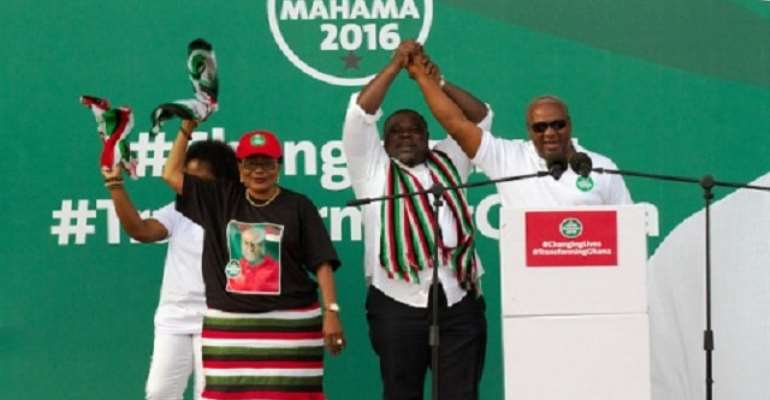 “Mutum Banza” is a Hausa expression used to describe a person who cannot be used for anything meaningful. In other words, “Mutum Banza” means “a useless person” or “a nonentity.”

“Mutum Banza” is a Hausa expression used to describe a person who cannot be used for anything meaningful. In other words, “Mutum Banza” means “a useless person” or “a nonentity.”

Yet, that was the expression the Mahama-led National Democratic Congress found the most appropriate to describe Alhaji Mahamudu Bawumia, the Vice Presidential Candidate of the New Patriotic Party, as the party sought to deal with the intellectual challenge he has thrown to them about the economy.

The venue was the Jubilee Park in Kumasi and the platform was the campaign launch of the NDC in the Ashanti Region, with Vice President Paa Kwesi Amissah-Arthur presiding.

The time came and Koku Anyidoho, a Deputy General Secretary of the NDC, mounted the stage, took the microphone and screamed to the bussed crowd:

So he charged: “Dr Bawumiaaaaaaaaaaa” And the crowd, including Vice President Amissah-Arthur, responded: “Mutum Banzaaaaaaaa.”

This was repeated several times, with excitement on the faces of the gathering, including the Vice President of the Republic of Ghana, who is the Chairman of the Economic Management Team.

Meanwhile, Mustapha Hameed, a member of the NPP Asawase Campaign team and a Lecturer at the Kwame Nkrumah University of Science and Technology, has condemned the despicable attack on Dr Bawumia.

“One would have thought that, when Koku Anyidoho got the platform, he would use it to address the 170 issues Dr. Bawumia raised. But no, he didn't address any of the real issues; he chose to rather cast diatribes, hurl insults and blatant personal attacks on the person of Dr. Bawumia,” he bemoaned in an interview the Daily Statesman yesterday.

“We in the NPP believe in the politics of ideas and issues; we believe politics should provide us the platform to debate the real issues on how to fix the economy, wean it off the IMF and provide jobs for our people. Koku does not have any monopoly over insults or vulgar language. But the question is, would insults and personal attacks provide jobs for the unemployed youth? Would it fix the economy? It wouldn't retrieve our monies from Woyome either. For these reasons, we in the NPP will not waste time on Koku's outbursts,” he further stated.

Mr Hameed added: “Dr. Bawumia is not going to allow himself to be dragged into the realms of absurdities by persons who obviously lack the intellectual wherewithal to debate the real issues and engage in any serious discourse. Clearly, Koku's effusions give clear indications that the NDC cannot stand the intellectual and factual weight that come along with Dr. Bawumia's lectures, hence feel the only way to silence Dr. Bawumia is by attacking him and hurling naked insults at him. Bawumia is unfazed by such things; he is focused on speaking on the ills of this economy, providing alternative solutions and exposing Mahama's incompetence and the corruption in the NDC government. And like Michelle Obama said about Trump, who engages in the same thing as Koku, when they go low, we go high. Ghanaians are the best of judges. Ghanaians know between Koku and Bawumia who's useless and who's useful in building Ghana's economy and moving the nation forward. We won't sink into the gutters with Koku Anyidoho.”

“The NDC and President Mahama are going around saying that these tax reductions as part of our comprehensive programme of economic reform and our manifesto promises will ruin the economy. I am so baffled. You are the President and you have presided in eight years over the collapse of our economy. If you knew the plan that could work with the economy and be successful, why haven’t you implemented that plan in eight years?” he said while interacting with students of the Nyankpala Campus of the University for Development Studies.

Nana Akufo-Addo’s Running Mate advised the President to focus on making the economy he had ruined work again, insisting that his record disqualifies him from becoming a judge on what will work or not work for the Ghanaian economy.

“If you know what can work for our economy, why is the economy collapsing in your hands after eight years? You clearly don’t understand the economic plans underpinning the NPP manifesto; your task is to make our economy work and is clear you cannot do it so you clearly have no legs to stand on in saying that the NPP plan cannot work because your own plan has collapsed the economy and we are bringing a new plan for the economy and this new plan will work”, he stated.

Dr Bawumia recalled the record of the Kufuor-led NPP Administration which reduced corporate taxes to stimulate the private sector and create growth, which caused an increase in government revenue, and reiterated the pledge by the NPP to introduce more of such policies to create growth and jobs and further revive the economy.

“We reduced taxes under the NPP – corporate taxes were brought down from 32% to 25% and at the same time we saw a major increase in revenue and so it makes economic sense and we are going to focus on production. The President for now should focus on fixing the collapsed economy”, he noted.