It Is The Whole NDC On The Ballot Come December 7 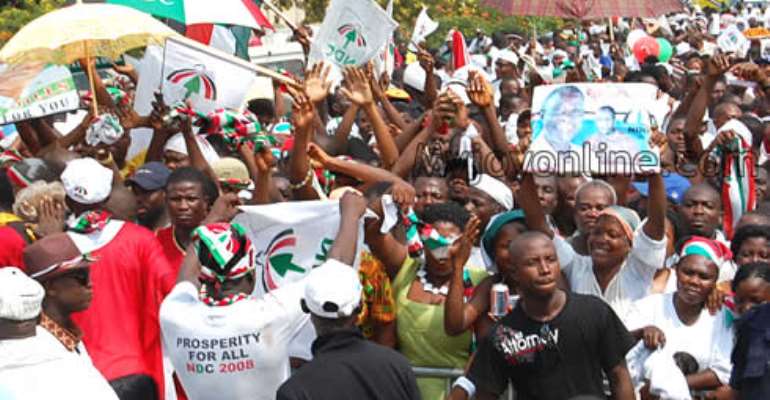 The NPP is not sleeping! They are wide-awake! And their sole aim is to win political power at all cost. So, they are working very hard. The NPP, which can be considered as the party with the most far-reaching diabolical plans and henchmen ever to walk on the face of the earth, are leaving no stone unturned.

Therefore, if God forbids, and the NPP wins in December 7, there would be the biggest sweep in Ghana. The whole country would be turned into a war zone, so those NDC people who are currently feeling very comfortable in their zones, better get out there and sell the achievements of the NDC party and President Mahama.

There are reports that some NDC government appointees are secretly working with the opposition NPP to oust President Mahama from power. In fact, some are even reported to be contributing secretly towards the Akufo-Addo’s campaign with the view to being retained in their current positions should Akufo-Addo wins. Like the famous folklore story of Alice in Wonderland, those appointees working against President Mahama may be dreaming in that “Big Wonderland”. Others, we are told are simply not working hard enough to justify why President Mahama appointed them to those high profile offices.

I would like to sound a word of caution. All those who are clandestinely working with the opposition NPP against the NDC, the very party that put them in those positions they occupy today are widely known. They have been outed! Their covers have been blown! Therefore, they should never harbour the view that no one knows what’s going on or what they are doing to undermine President Mahama and largely, the NDC.

What those evil people working against the NDC do not know is that the NPP is not a forgiving party. To put it bluntly, the cash-strapped NPP folks will lure and take their monies, but will never retain any of them at their current positions or move them around if God forbids they capture political power.

Therefore, it is the whole NDC on the ballot come December 7, and not President Mahama and the dire-hard NDC faithful. If somebody appoints you to a position of responsibility with the view to helping him prosecute his transformational agenda and you secretly work against him, God’s fire will indeed burn you!

God will indeed vindicate President Mahama come December 7, because the media in Ghana is deliberately preventing Ghanaians to know the true state of affairs as far as the infrastructural development under President Mahama is concerned.

Nana Akufo-Addo has no legs to stand on. He has no record to tout to Ghanaian voters. In fact, if he does, Akufo-Addo would have exaggerated his days at the Ministry of Justice and Foreign Affairs.

But Akufo-Addo is empty. His days as the Attorney General during Kufuor’s regime saw the disappearance of the docket of three NPP Women Executives at Dworwulu in Accra, who were arrested for attempting to smuggle drugs out of the country. Akufo-Addo again is on record for releasing assets that have been seized from convicted drug kin-pins including Benjilo, when he was the Attorney General. Such stinking record is what the NPP wants to keep away from voters.

Many Ghanaians have not forgotten when Akufo-Addo as the Minister of Foreign Affairs issued diplomatic passports to convicted drug lords. And true to the character trait of Akufo-Addo, he has surrounded himself with the same drug lords some of whom are contributing heavily towards his foundering 2016 political campaign. Such a blatant irresponsible, unpatriotic, divisive individual who goes by the name Akufo-Addo is running for office and wants Ghanaians to test him.

One may simply ask, did Akufo-Addo pass the test as Attorney General and Foreign Affairs Minister? If Akufo-Addo did, he would definitely be running on his own record. But Akufo-Addo’s record everywhere stinks. I will even qualify it by saying he does not have any, record at all, which is why he wants Ghanaians just to try him.

I will say again, that it is the whole NDC on the December 7 ballot! It is certainly not only President Mahama, because if the President loses he goes down with everybody. I mean all his appointees! No single NDC political appointee will be left intact! Whatever contributions you made to aid the NPP will certainly not be recognized by these nation wreckers. So if you are working against President Mahama or have any intentions to do so better be warned.