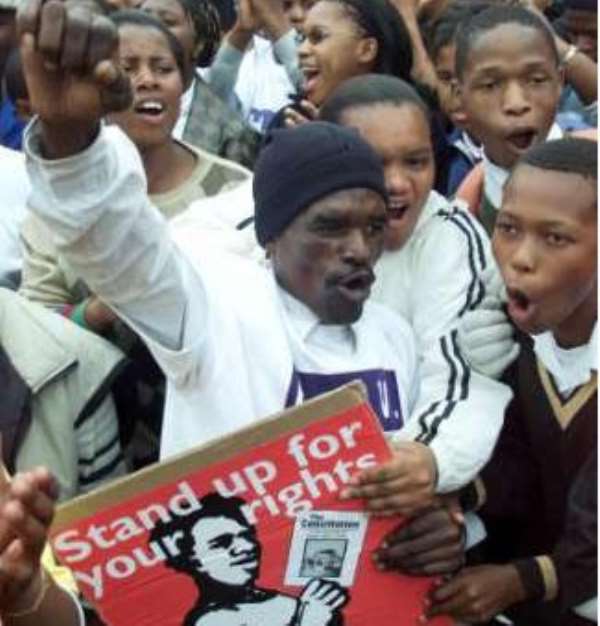 Accra, Feb. 28, GNA - The Committee for Joint Action (CJA), a non-partisan group, would embark on a peaceful street protest, dubbed: "Wahala Demonstration" on March 1, against fuel price increases. The demonstration, according to Mr Edward Omani Buamah, spokesman for the committee, was also against "bad governance, mounting economic hardships and the insensitivity of the New Patriotic Party (NPP) government".
The CJA, comprising a number of opposition political parties, democratic organizations and civil society groups, said it was leading the street protest against the increase in fuel prices and general hardships. The "Wahala demonstration" being organised on a broad non-partisan platform would start from Kwame Nkrumah Circle at 0800 hours, Mr Buamah, a former president of the National Union of Ghana Students (NUGS), told a press conference in Accra. He advised participants against wearing party colours and other insignia of political parties.
Mr Buamah said since all the groups involved shared similar concerns, they had decided to combine their efforts to advance the interests of the people of Ghana. Mr Buamah, who is currently a final year medical student at University of Ghana, Legon, said it was an undeniable fact that the ordinary people of Ghana were suffering and the recent fuel price increases were bound to worsen the situation.
"The truth is that Ghanaians are suffering. School fees, transportation, rent, electricity and water bills and the general cost of living have now become so unbearable. That is the daily 'Wahala' that the people of Ghana are facing." He said the measures announced by the government to mitigate the effects of the fuel price increases were at best cosmetic and a clear indication that it not being honest with Ghanaians as far as the economy was concerned.
"Prior to the December 2004 elections, the NPP government denied that it had any plans to increase fuel prices in the event of winning the elections. Even after winning, the NPP government continued to assure Ghanaians that there would not be any fuel price increases because it had prudently managed the economy. "Ghanaians were even told there would be a public debate on deregulation of the petroleum sector, including the issue of pricing.
"Barely a fortnight later, the same NPP government came out with new fuel prices. The public debate never took place. We are now being told that the increase in the fuel prices had become necessary because government had to remove the so-called subsidies."
Mr Buamah said the recent fuel price increases were part of IMF/World Bank conditionalities for economic assistance, which the government accepted to implement long before the election but which they always denied. He said the government by its majority in parliament had "become so arrogant that it thinks it can do as it likes and get away with it' and cited the imposition of new taxes on fuel prices without prior Parliamentary approval. He said although the act was against the Constitution, the NPP used its majority to have its way.
Mr Buamah said Ghanaians had the right to call the government to order just as they did to previous governments. "NPP government's ability to make electoral promises and break them with impunity is undermining confidence in democracy. They are inimical to good governance and the earlier we call them to order, the better it will be for our fledging democracy.
"No government has the right to lie and deceive the people and impose harsh economic conditions only because it has won an election. The mandate any government gets is based on the assumption that it will be honest and alleviate the suffering of the people." Mr Muamah assured the public that the CJA had taken all measures, including co-operating with the police, to ensure peace, law and order during and after the demonstration.