By Stephanie Aglietti and Dave Clark 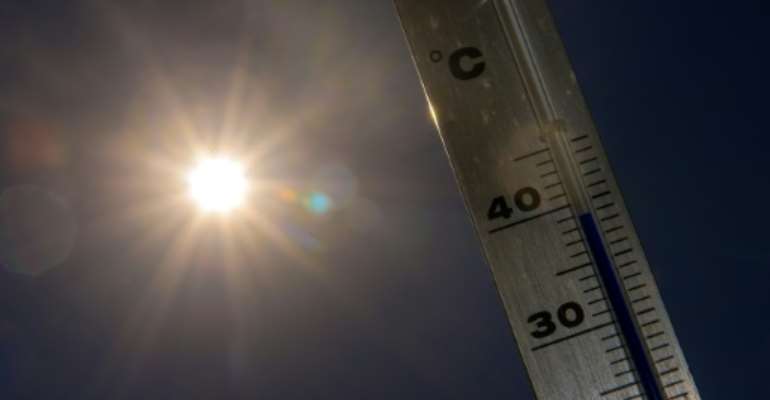 Air conditioning is the cause of the largest growth in hydrofluorocarbons and the world is likely to have another 700 million air conditioners by 2030. By Philippe Huguen (AFP/File)

Kigali (AFP) - World envoys were Friday putting the final touches to a deal in Rwanda to phase out potent greenhouse gases used in refrigerators and air conditioners, a major step in curbing global warming.

Tough negotiations have seen major developing nations such as India put up a fight over the timeline to phase out the use of hydrofluorocarbons (HFCs) and the financing of the transition.

However some delegates were already praising an early agreement in principle, and were hammering out the final details in late night sessions.

"Country representatives are now negotiating the final details of the amendment," read a tweet from Rwanda's natural resources ministry.

HFCs and the greenhouse effect

"This is a huge win for the climate. We have taken a major concrete step in delivering on the promises we made in Paris last December," said Miguel Arias Canete, a commissioner with the European Union in a statement ahead of the adoption of the agreement.

"The global phase-down we have agreed today could knock off up to half a degree of warming by the end of the century."

However thrashing out the nitty-gritty of the deal could take talks into the early hours of Saturday.

HFCs were introduced in the 1990s to replace chemicals that had been found to erode the ozone layer, but turned out to be catastrophic for global warming. 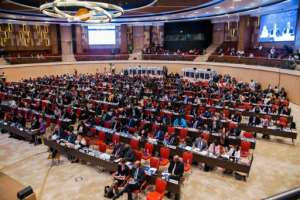 Delegates attend the official opening of the 28th meeting of the Parties to the Montreal Protocol in Kigali on October 13, 2016

However swapping HFCs for alternatives such as ammonia, water or gases called hydrofluoroolefins could prove costly for developing countries with sweltering summer temperatures, such as India.

These countries want a later date for the phase down to begin.

Last month, a group of developed countries and companies offered $80 million (72 million euros) to help developing countries make the switch away from HFCs.

US Secretary of State John Kerry earlier acknowledged that while the US would be ready to begin phasing out HFCs by 2021, other countries might move at a slower pace. 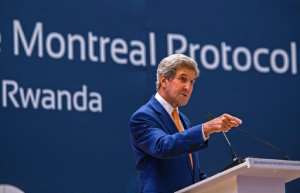 US Secretary of State John Kerry delivers a speech during the 28th Meeting of the Parties to the Montreal Protocol in Kigali, on October 14, 2016

"But no country has a right to turn their back on this effort," he told delegates, warning that the world already faces droughts, flooding, agricultural disasters and waves of climate refugees.

"And if we're going to give this amendment the teeth it needs to prevent as much as a half-degree of warming, then we need to make sure we're pushing for the most far-reaching amendment we can adopt," he declared.

Erik Solheim, head of the UN Environment Programme, said that if the agreement was adopted, "it will be one the most important global meetings in this year."

HFCs' predecessors, chlorofluorocarbons (CFCs), were discontinued under the 1987 Montreal Protocol when scientists realised they were destroying the ozone layer.

This blanket of gas in the upper stratosphere protects Earth from the Sun's dangerous ultraviolet rays.

But it emerged that HFCs, while safe for the now-healing ozone, are thousands of times worse for trapping heat than carbon dioxide, the main greenhouse gas.

According to the Berkeley National Laboratory, air conditioning is the cause of the largest growth in HFCs -- and the world is likely to have another 700 million air conditioners by 2030.

But continued use of HFCs could prove a serious stumbling block to attaining the goal.

HFCs -- though they are greenhouse gases like carbon dioxide, methane and nitrous oxide -- are not dealt with under the Paris Agreement but under the Montreal Protocol.

Any amendment to the protocol will be legally binding.

Registrar Of Volta Regional House Of Chiefs Reacts To Allega...
23 minutes ago