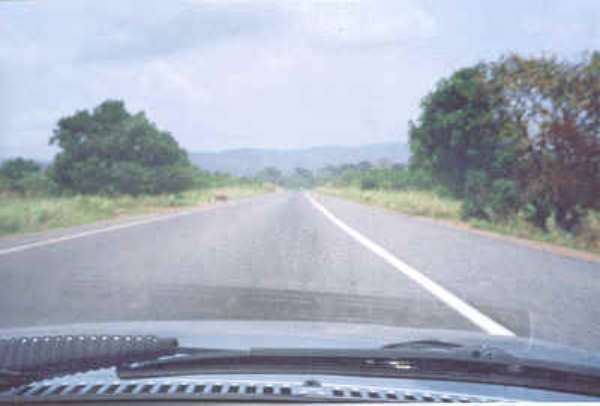 Armed robbers have intensified their activities on the highway in the Brong Ahafo region.

Since last Saturday, the robbers have attacked drivers and passengers in the Asutifi, Wenchi and Pru districts of the region and robbed them of several millions of cedis, many foreign currencies, mobile phones and other property.

Twelve masked robbers wielding single-barrelled guns and other offensive weapons attacked passengers on board a Mercedes Benz bus and a Hyundai pony taxi and robbed them of ¢ 24.017 million and three mobile phones at Akwadaabone junction on the Tepa-Acherensua trunk road at dawn on Monday.

A police source at Kenyasi said on Monday, the Benz bus with registration number GR 5347 V, driven by Mr. Kwabena Boateng and full of passengers was heading towards Kumasi from the western region, while the taxi driven by Mr. Kwame Duah, was on its way to Goaso from Tepa.

It said on reaching Akwadaabone junction, near Konkotreso, around 1 am, the masked robbers, who had blocked the main road with pieces of firewood, ordered the passengers on the two vehicles to get down.

According to the source, the robbers did not just search the bodies of the passengers and their bags for money and mobile phones but brutalized them as well.

It said they forcibly seized ¢ 24.017 million and three mobile phones from the passengers.

The source said one of the male passengers mustered courage, snatched one of the guns from a robber and fled into the bush to fire at them.

But the criminals, sensing danger, traced him, retrieved the weapon and brutally assaulted him, using the butts of their guns and clubs.

The source also said that five of the passengers who sustained serious injuries were later sent to the Acherensua health center for treatment.

The source said the victims lodged a complaint with the Kenyasi police who went to the scene and retrieved five 'bb12' cartridges and a mask.

When the Chief Inspector Christopher Tawiah, the regional police public relations officer (pro), was contacted on the robbery, he confirmed it and said that the police had intensified their search for the robber.

No arrests have been made.

In another development, a group of armed robbers attacked Mrs. Betty Mould Iddrisu, the legal director of the commonwealth secretariat in London and two others last Saturday night and robbed them of large sums of money and other properties. The other victims were Mr. Osman Alhassan, a driver and Mr. Francis Bawah.

Briefing the graphic in Sunyani yesterday, chief inspector Tawiah said the three were traveling in a Toyota land cruiser vehicle from Accra to Wa last Saturday.

He said between Wenchi and Bamboi, around 1.30 am the robbers attacked these people and robbed them of ¢ 15 million, some foreign currency, four mobile phones and jewellery valued at $12,400 and left in the victims' car.

Chief Inspector Tawiah said the robbers later abandoned the vehicle at new Longoro, about eight kilometers from Bamboi, after it had been involved in an accident.

He said in the case also, no arrest had been made but the vehicle had since been returned to the owner.

In a related development, an armed robber shot and wounded Mr. Abdul Bukari Musah, the driver of a Mercedes Benz bus with registration number as 1926 W at midnight on Friday, February 18, at Sawaba Number One, near Yeji.

Chief Inspector Tawiah said a young man that Mr. Bukari could not identify hired a vehicle from Kumasi to convey mourners to Kranya-Akura, near Yeji, last Saturday.

He said on reaching Sawaba Number One around midnight, an unidentified person fired a gun at him from the bush thereby injuring him in the left shoulder and he fell in a coma.

Chief Inspector Tawiah said the young boy accompanying the driver managed to escape through the bush, reported the matter to some people at Sawaba Number One, who rushed to the scene and sent him to the Mathias Hospital at Yeji for treatment.

On his return from the hospital, the vehicle was nowhere to be found.