Ghana's Ambassador to the US meets Ghanaians in Chicago 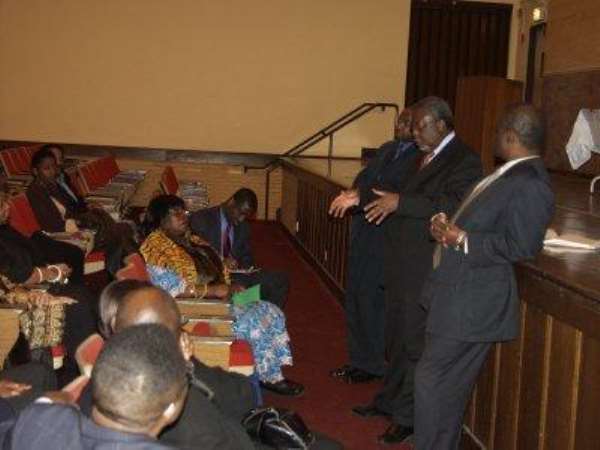 ...He appeals to Ghanaians to apply for dual citizenship.. Ghana's Ambassador to the Us, His Excellency Fritz Kwabena Poku met with a cross section of the Ghanaian and African American Communities in Chicago on Tuesday February 22, 2005 at the Northwestern University's Center for Inner Studies.

Although the turnout was not what was expected for various reasons the attendees were very happy and excited about what the Ambassador told them.

The Ambassador informed the attendees that the Dual Citizenship bill had been passed by Parliament and that it is finally legal. He appealed to Ghanaians to apply. Mr. Akron assured Ghanaians that although the forms are not downloadable they would be soon.

Mr. Poku also informed Ghanaians of plans in the works to get Ghanaians in the Diaspora to vote. He informed them that a bill that was sent to Parliament was not passed and assured the attendees that the bill to get Ghanaians abroad to vote would be passed by the year 2008.

The Ambassador appealed to the Ghana National Council of Metropolitan Chicago not to define itself by ethnicity. He observed that currently the affiliates that form the council are various cultural associations. He wanted that to change to include a representation of all Ghanaians. He observed that information does not seem to be filtering too well from the council to the Ghanaian population in Chicago.

Mr. Fritz Poku informed the attendees of the appointment of an Honorary Consul for the Chicago area and that it would be a voluntary position. Mr. Akron informed the attendees that names had been submitted to the embassy in Washington and that there is a vetting process going on before the names are sent to Ghana for the final decision.

There was also good news from the Ambassador on the state of the Ghanaian Airline Industry. He informed the attendees of the establishment of Ghana International Airlines to replace the defunct Ghana Airways. He however said the Government is trying to figure out how to solve the $160million debt from the Ghana Airways debacle. He promised that this time the Airlines would have sound economic and equity management.

In answer to a question by the Publicity Secretary of the Ghana National Council, Hajia Mariam Issaka, Mr. Akron informed the attendees that the reason Ghanaians have to pay for visa forms is that the forms are printed by the Government and serialized which makes them expensive but there are plans in the works to eliminate the fees and incorporate them in the processing fees.

The president of the Ghana National Council's address for the occasion was presented to the Ambassador due to time constraints.