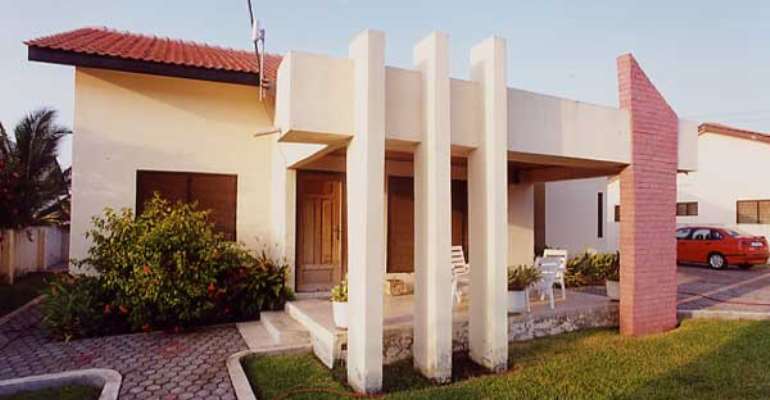 Accra, Feb. 23, GNA - Government would work out a scheme to subsidize the interest rate on mortgage purchases to ensure that workers acquired their own houses after retirement, Mr Hackman Owusu-Agyeman, Minister of Works and Housing, said on Tuesday. He said the present cost of building would make it difficult for an average salary earner to put up a house and cope with the ever-rising cost of living. Mr Owusu-Agyeman was speaking at a sod-cutting ceremony for the commencement of work on the pilot phase of the real estate development project at Community 19 at Tema. The project named "Meridian Gardens" is a joint venture between the Social Security and National Insurance Trust (SSNIT) and Metro Ikram Sdn Bhd of Malasyia. It has been programmed that 2,088 residential units would be constructed under the first phase. The project has been categorized into three types, Type-A is made up of two bedrooms with the price ranging from 20,000 dollars to 22, 000 dollars; Type-B, a three bedroom apartment with a price range of 30,000 dollars to 35,000 dollars and Type-C, a four bedroom duplex selling between 75,000 dollars and 80,000 dollars. Mr Owusu-Agyman noted that the Government would take prudent measures to reduce the price of the apartments to make it affordable to all workers. Mr Kwasi Osei, Director-General, SSNIT, said in view of the fact that the houses would be sold outright, efforts were being made to promote the mortgage market in collaboration with other financial institutions to make mortgage finance available and easy to access by workers. He said prospective buyers would have to subscribe by signing on and making the required deposits and appropriate instalment payments during and after the construction period. "This can be done through a mortgage financing arrangement with selected participating banks and financial institutions". Mr Osei noted that a housing unit would subsequently be allocated on paper to the prospective buyer. "The construction of each unit will only commence after all the units within a sector have been signed for and the financing arrangements duly completed. He said this was to forestall the problems of constructing houses without buyers with its attendant holding costs. Mr Osei indicated that the measure was meant to curb the re-occurrence of the problems the Trust faced in the collection of rent from about 7,000 houses built in 1998. He said although the houses were given out at a heavily subsidized rate, SSNIT was still grappling with delayed rent payment and in some cases the refusal of tenants to pay their rent. Mr Anwar Mammod, Development Director, Metro Ikram, Malasyia, said the project would be extended to other parts of the country in the next seven years to meet the existing housing demand of the people. He was optimistic that the venture would further deepen the bilateral relationship between Ghana and Malaysia.