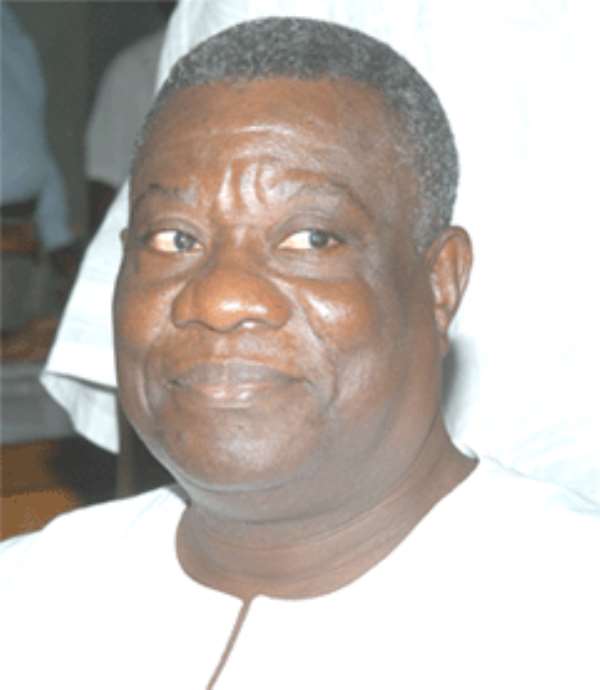 ... petroleum prices up by over 360% under NPP ... in opposition NPP opposed slightest increases ... 40% tax, levy and duty element in the petroleum prices Accra, Feb. 22, GNA - Professor Evans Atta Mills, former Vice President on Tuesday said the ruling New Patriotic Party (NPP) government should be called to order for its continued increases in petroleum prices without regard to its effect on the poor and the economy. He said, if the NPP was not called to order the suffering of the people would lead to social explosion, which would affect governance. Prof. Mills, who expressed these in a statement he issued on the current petroleum price increases said, "I am concerned that one day very soon, if we do not take care, the bubble will burst. When the people finally realise that they cannot afford the prices generated by the fuel price increases ... there will be a complete erosion of the people's confidence in governments in general. "But as Ghanaians, we must not wait for that to happen, for that will entail a disruption of the entire governance order. Prof. Mills, who was the 2004 NDC Presidential Candidate called on the leaders of the opposition parties, civil society, religious leaders and traditional authorities to come together to call the NPP to order because the direction in which government was heading would lead to a social explosion and that there was no need to sit down for that to occur. The former Vice President said the 50 per cent hike in petroleum prices was mind-boggling and that, that was coming after a 54 per cent increase in January 2001 and a 100 per cent increase in February 2003. Thus within a little over four years in power, the NPP government has increased petroleum prices by over 360 per cent, over the December 2000 price levels. Prof. Mills said, "This is against the background of a party which when in opposition, opposed even the slightest increases in petroleum prices, arguing that, 'affordability' should be the guiding principle in the fixing of petroleum prices. "They went as far as to organise street demonstrations against any increases, threatening to make the country ungovernable, culminating in the infamous 'Yabre' demonstration of November 1999." Prof Mills said the recently announced fuel prices ignored the principle of affordability and also showed little or no regard to the poor, the vulnerable, the marginalised and the disadvantaged in a society whose people were entitled to the constitutional protection of the state. "Responsible governments world-wide subsidise the cost of social goods with a view to protecting the poor, the disadvantaged and the marginalized. "The NDC did it in 1999/2000 without sacrificing health, education, electricity, water, roads and other infrastructure facilities. The NPP can do the same but for its determination to build a 'property-owning democracy' in which only the rich can survive." Prof. Mills, a lawyer and a tax expert, said within the announced prices were taxes and other revenue raising measures that could be adjusted in such a way as to bring the prices down and make them a little more affordable for the ordinary Ghanaian if the Roads Development Fund Levy, the Strategic Stock Levy, the Hydrocarbon Exploration Levy, the ad valorem duty and the specific excise duty were taken into consideration. He said it was false that fuel was being subsidised and that the over 40 per cent tax, levy and duty element in the petroleum prices represent revenue to government in the face of which one could not talk about any subsidy element in the price. Prof Mills declared that he was ready to play any role that would make the NPP sit up and remember the alleged hardships that they complained about whilst in opposition have not ameliorated and that they have worsened under the NPP government.