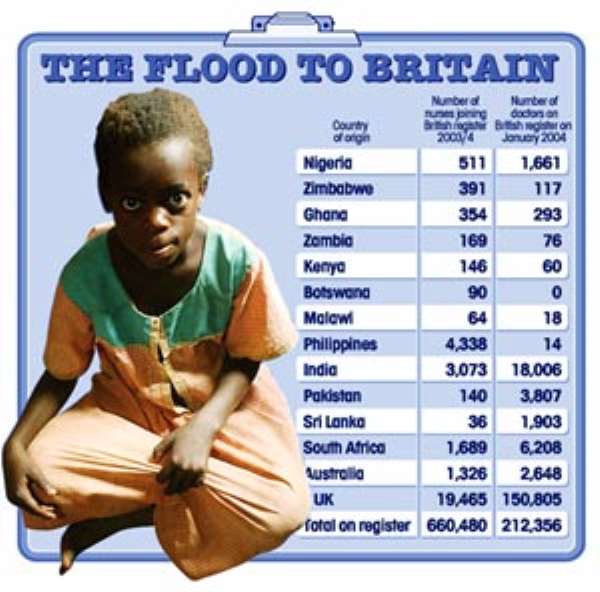 Ghana and several poor countries are spending millions of pounds training doctors and nurses to "prop up" the NHS, a new report claims.

Save the Children said the migration of health workers, particularly from sub-Saharan Africa, to the UK was adding to the collapse of developed nations' health systems.

The charity said that the UK Government should financially compensate poor countries which lose their staff in efforts to tackle shortages in the NHS.

The recently strengthened code of practice on overseas workers bars active recruitment in developing countries, but does not prevent doctors and nurses from volunteering to work in the UK.

Save the Children said the Government should not ban health workers from poorer countries from seeking work in the UK, as this would infringe their freedom of movement rights.

But the Government should acknowledge that poor countries are subsidising the NHS and should provide compensation accordingly.

It was estimated that the UK has saved A£65 million in training costs by recruiting nurses and doctors trained in Ghana alone, with services delivered by these workers valued at A£39 million per year.

The charity said that poor countries were already blighted by the escalating HIV and Aids crisis, high rates of child mortality, malnutrition, disease and poverty.

Mike Aaronson, Save the Children's director general, said: "Many African countries suffer severe poverty and have limited funds available for basic services like education and health.

"It is vulnerable children who suffer disproportionately when these services are failing.

"It is shameful that many poor countries are spending millions of pounds training nurses and doctors to prop up the UK's National Health Service."

The Save the Children report - Whose Charity? Africa's aid to the NHS - focused on Ghana, where one in 10 children dies before the age of five.

The report said it was estimated that over half of doctors trained in Ghana had migrated, with the main reasons said to be poor and dangerous working conditions, low pay and limited training opportunities.

It is estimated that as many as two-thirds of new doctors and almost half of new nurses registered in Britain last year came from abroad, from places including Africa, India and the Philippines.

As well as compensating poor countries, Save the Children said the UK should introduce positive policies to reduce inequalities in health services between poorer nations and the UK.

It said partnerships should be established with poor countries to provide incentives for staff to train and stay in their home states or to return home after training in the UK, as well as to enhance their careers.

The report concluded: "Urgent action to compensate poor countries should be complemented by plans to prevent staffing shortfalls by producing more health professionals in the UK."

General secretary Dave Prentis said: "It is shameful that the UK is responsible for depriving children in some of the poorest countries around the world of basic health care, by attracting health professionals to the UK.

"There is a global shortage of nurses and it is time for the UK to face up to its responsibilities as one of the richest nations in the world, and stop taking and start training.

"We should start by increasing the number of training places available and learn some lessons from the '70s when students were encouraged to come from Commonwealth countries to train in the UK.

"We should develop training opportunities for overseas students, pay their tuition fees, give them a bursary and increase the pool of trained health staff internationally."

He added: "It is morally wrong to take nurses and doctors from countries where their services are desperately needed."