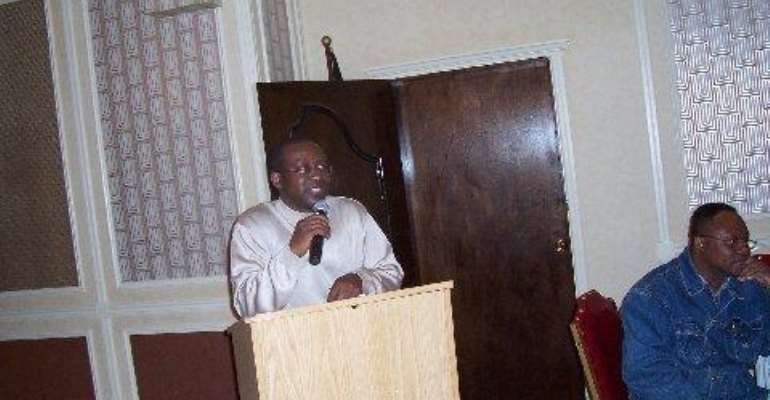 ....at Town Hall Meeting with Ghanaian community in Chicago. The new Executive Council of the Ghana National Council of Metropolitan Chicago outlined its Agenda for its term of office on Saturday February 19, 2005 at a Town Hall meeting at the Alessandro Banquet Hall in Cicero, Illinois. The invitees were representatives of Churches, Ghanaian Businesses, clubs and societies in Chicago, all affiliates of the Ghana National Council, traditional heads of Ghanaian Traditional Organizations in Chicago, and some individuals.

The meeting started with an opening prayer by the Reverend Dr. Noonoo. He called for God's guidance in the Community's deliberations. Attendees were served lunch and the Executive Council allowed members to have lunch and chit chat among themselves the first hour and a half.

In opening the meeting, the Vice President of the GNC, Mr. Ebenezer Antwi-Nsiah, who was also Chairman of the occasion, thanked all members of the Community who were present for taking time to meet the Executive Council to discuss issues facing the Ghanaian Community. He noted that it's encouraging that Ghanaians rarely have such meetings except to celebrate a community member's birth or death.

In his opening address the President of the GNC, Mr. Reuben Hadzide, thanked the attendees for their presence and appealed to them for their support in making the GNC a formidable organization. He also informed them of the appointment of some members to an Advisory Board and the formation of three main committees from the membership of the Advisory Board. He stated that the committees are: The Ghana House Committee, The Financial Committee and the Constitutional Reform Committee. He further stated that these committees would be reporting to the Executive Council. He also thanked the attendees for taking time to attend the meeting.

After the President's speech all the Executive Council members outlined their agenda for their term of office:

In outlining his agenda, the Treasurer, Mr. John Henry Assabill reiterated the President's statement that the most important item on current administration's agenda is purchasing or leasing a Ghana House. He stated that fees would be charged for private events to generate revenue for the council. The Treasurer also informed the attendees that the council expects a bigger turn out for the 2005 Ghana Independence Anniversary Celebration Dinner/Dance. He also appealed to Businesses and Individuals in the Community to patronize the GhanaFest AD Book.

The Business Manager, Mr. Cobby Boahene informed members of the Community of the Executive Council's plan to seek contributions of $1.00 a day from individual Ghanaians towards the Ghana House. He stated that the Ghana House when purchased would house games for the elderly.

In his address the Secretary of the Executive Council, Dr. Mark Kutame informed attendees of the need to establish a database to keep all council records and minutes for future reference.

In her speech, the Publicity Secretary, Hajia Mariam Issaka informed members of the Community that the aim of the current Administration is to market the Ghana National Council of Metropolitan Chicago and its activities to the both Ghanaians and non-Ghanaians alike. She informed the attendees of the formation of a History Committee to write the history of the Ghana National Council. She also stated that in line with the marketing of the organization the Executive Council has decided look for alternative locations to hold GhanaFest 2005. Also on the agenda is the distribution of video recordings of Ghana Community events to college and City libraries.

The Sergeant-at-Arms, Mr. Ernest Bugyei repeated his vow to maintain order at council meetings and also informed members of the need to include a representation of the youth at Ghanaian events.

The Assistant Organizing Secretary informed attendees of the Executive Council plans to introduce programs to keep the Ghanaian kids off the streets in summer.

On behalf of the Financial Secretary, Mrs. Jane Boateng-Poku who absent on an emergency, the Vice-President informed attendees of the proposed increase in affiliate dues and that the council would need the help of the community in funding council activities. He appealed to Business leaders of the Community to transact business with the council at discounted rates.

The forum was then opened to attendees for any questions, comments or suggestions.

Mr. Farkye of Kwahu United wanted to know what the associations dues are used for.

Mrs. Elizabeth Bekoe, the former President and Mrs. Patience Adigbli, former Secretary resolved to help the current administration. Mr. Bashiru Habib appealed to the Executive Council to study Health Programs that would be beneficial to the Community.

Nana Akwasi Addae, a member of the Advisory Board and the Ghana House Committee presented a proposal which he had originally written for Asanteman Association to the Executive Council for the purchase of Ghana House. He outlined some of the requirements of the City of Chicago that the Council would have to meet.

In her address, Kathy Kerekes, Director of Marketing Development for Western Union thanked the Council for having them and pledged that Western Union would continue to sponsor activities in the Community.

In his closing address the Vice-President thanked Western Union for its generosity and the support of the Community. He also thanked the attendees for attending the meeting.

The event was sponsored by Western Union Inc. U.S.A.