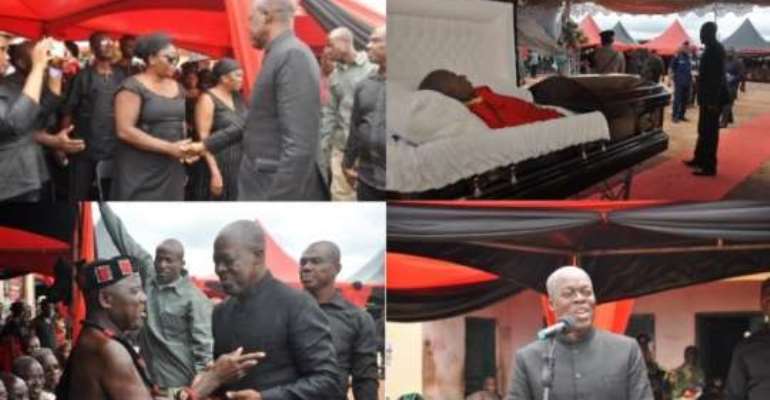 Vice President Amissah-Arthur and the delegation filed past the body of the Lt Col Donkoh to pay their last respect to the deceased.

The late Lt Col who died at the age of 77 was former Ghana's Ambassador to Cote d' Ivoire and Chief of Staff under the erstwhile Provisional National Defence Council (PNDC).

The late Lt Col Donkoh was given a full military burial with his casket wrapped in national colours.

He said being the first military man to be Chief of Staff he was able to bring both the military and their civilian counterpart together for the development of the nation.

He said his good works on earth also bare testimony of his relationship with his maker in Heaven.

Vice President Amissah-Arthur said Lt Col Donkoh was a good friend, brother and colleague whom he had the opportunity to work with from the PNDC to NDC days.

He said late Lt Col Donkoh was a very humble and forthright personality who served his nation very well in all the positions he occupied.

He said his death is a great loss to the nation and the NDC fraternity.

The Ghana Armed Forces in a tribute said the varied nature of appointments he held across most of the units, formations and headquarters of the army was proof of his versatility resilience.

According to the Ghana Armed Forces, Lt Col Donkoh believed in the principles that everything was possible in life as long as one believed and worked towards it.

From 2001, until his demise on July 13, Lt Col Donkoh remained a member of the Council of Elders of the ruling NDC. GNA