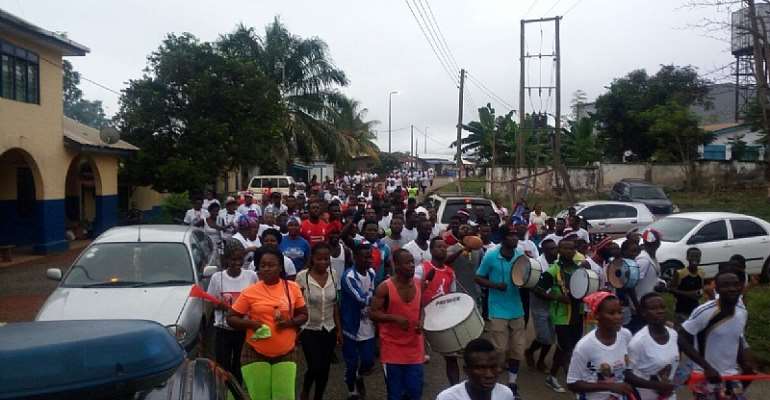 LADIES closed to 1,000 ladies named '' Abuakwa Ladies For Mrs. Rebecca Akuffo Addo'' from both the Abuakwa South and North Constituency in the Eastern Region on Sunday hits the streets of Kyebi to embarked on a keep fit walk with the aim to campaign effectively for the success of Nana Akufo-Addo and the New Patriotic Party (NPP) in the upcoming general election.

The ''Abuakwa Ladies For Aunty Bekie'' which is yet to be launch in next month was organized by the Assemblyman of Ahenbronu Electoral area of the East Akim Municipal Assembly, Hon Edward Aseidu Bekoe, vowed to work tirelessly for Nana Akufo-Addo to secure 90 per cent of the valid votes cast in the Abukwa South Constituency in the December 7, 2016 general election.

Hon Edward Aseidu Bekoe, speaking to the media said, the agenda of the group is to convince the residents and ordinary Ghanains suffering under the hardship of the NDC to cast their votes for Nana Akufo-Addo and Hon Samuel Atta Akyea, added that, they and their wives would also conduct house-to-house campaigns during their free time for Nana Akufo-Addo

According to the Assemblyman, they formed the association to vote President John Mahama and the NDC government out because of the economic hardships they were facing.  He cited some of the hardships as outrageous electricity tariffs; indiscriminate increases in fuel prices; cancellation of the nurses and teachers allowances.

Hon Samuel Atta Akyea, Abuakwa South MP, who was the guest of honor in his address, said he was confident that when Nana Akufo-Addo was elected as President, he would reduce the high electricity bills, the numerous taxes and fuel cost, reinstate the nurses, teacher's allowances, also build the one district, one factory project, to bring lasting relief to them.

Hon Atta Akyea, however, entreated the ladies to embarked on one on one campaign and preach the message of the NPP to enable Nana Akuffo Addo to win the polls and turns the fortunes of Ghana economy.

The Abuakwa Ladies For Aunty Bekie which has been outdoor will be launch in next month where the wife of the NPP flagberear will be the special guest of honor to official inaugurated it.