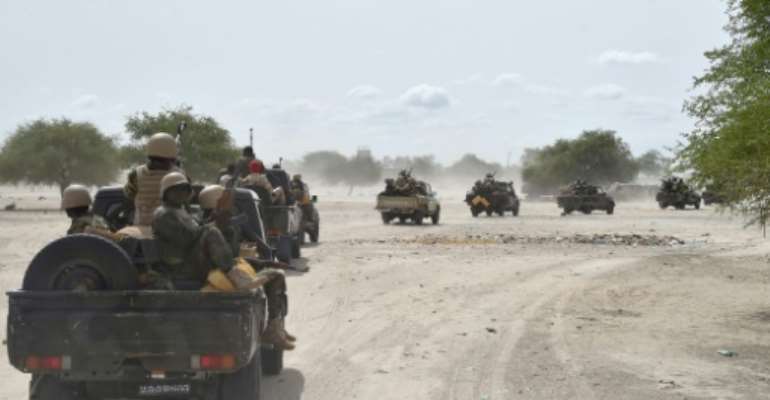 In late July of 2016 a multinational force, drawn from Nigeria, Niger, Chad and Cameroon,Â was formed to tackle Boko Haram insurgents and clear them out of towns and villages. By Issouf Sanogo (AFP/File)

Niamey (AFP) - Niger's army said Friday that 14 of its soldiers and scores of Boko Haram fighters had been killed during a multi-month sweep operation in the nation's southeast.

Defence ministry spokesman Colonel Moustapha Ledru told state television that "123 terrorists" had been killed and "a large quantity of arms recovered from the insurgents."

It was not possible to independently verify this number.

Ledru said 14 soldiers were killed and 29 wounded in the joint operations with Chad's military took place between July and September 28.

They targeted the Diffa region, which lies just across the border from the Islamists' stronghold in northeastern Nigeria.

Ledru said the "terrorists" who had been killed had "infiltrated" into Diffa from Nigeria, adding that two fighters had been captured.

Boko Haram's seven-year insurgency has left at least 20,000 people dead in Nigeria and border areas of neighbouring Niger, Chad and Cameroon, and made more than 2.6 million homeless.

In late July this year a multinational force, drawn from Nigeria, Niger, Chad and Cameroon, was formed to tackle the Islamic insurgents and clear them out of towns and villages.

Ledru said operations had led to four strategic localities being taken back from Boko Haram control.