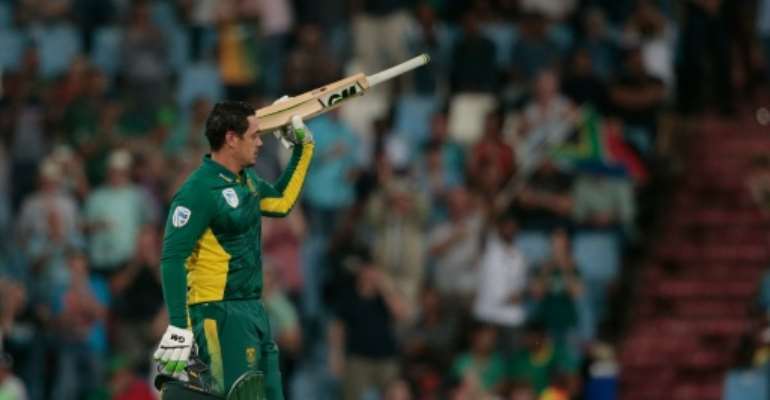 South African batsman Quinton De Kock raises his bat as he celebrates scoring a century during his ODI cricket match against Australia on September 30, 2016 in Centurio, South Africa. By Gianluigi Guercia (AFP)

"He was magnificent," Australian captain Steve Smith said of De Kock. "It was a 370-380 wicket if you look back at it now. Someone (for Australia) had to get a big hundred like Quinton did."

De Kock and stand-in fellow opener Rilee Rossouw put an inexperienced Australian pace bowling attack to the sword in an opening partnership of 145 off 104 balls before Rossouw missed a reverse sweep against the first ball bowled by leg-spinner Adam Zampa and was leg before wicket for 63, made off 45 balls.

Rossouw, playing his first match since being injured against the same opponents in Guyana in June, was added to South Africa's squad when regular captain AB de Villiers was forced to have surgery for an elbow injury.

He then found himself in the starting team on Friday when Hashim Amla was ruled out by illness.

De Kock was in imperious form virtually from the start of his innings, hitting a six off John Hastings in the second over. He reached 50 off 38 balls and reached his 11th one-day international century off 74 balls when he pulled Daniel Worrall for his fourth six.

It took him only 27 more balls to reach 150 with his eighth six, hit off Zampa, which he celebrated by hitting the next two balls for six as well.

"During the evening the ball comes on nicely," said De Kock. "Me and Rilee didn't have to do anything extravagant."

It was an opinion which the Australians and everyone else at Centurion might not agree with.

"At night it's difficult to defend," said South African captain Faf du Plessis. "But that doesn't take anything away from Quinton."

De Kock broke a favourite bat during his innings but shrugged it off. "Wood is wood," he said.

In a match in which the pace bowlers of both teams took heavy punishment, 20-year-old medium-pacer Andile Phehlukwayo had figures of four for 44 in Australia's innings of 294 for nine.

Playing in his second match after an unremarkable debut against Ireland last Sunday, Phehlukwayo was hit for 16 runs in his first over by Aaron Finch but came back strongly.

He had Finch caught at backward square leg and Smith leg before wicket in his second over. He followed up with the wicket of Mitchell Marsh, caught by a diving wicketkeeper De Kock.

George Bailey and John Hastings dug Australia out of a trouble with a 79-run stand after they had been in danger of not batting out their overs when they slipped to 192 for six in the 29th over.

Bailey (74) and Hastings (51) steadied the innings, with Hastings going to a maiden international half-century before he became Phehlukwayo's fourth victim when he was caught on the long-off boundary.

With David Warner setting the tone with 40 off 36 balls, Australia scored rapidly after being sent in but kept losing wickets before Bailey and Hastings came together.