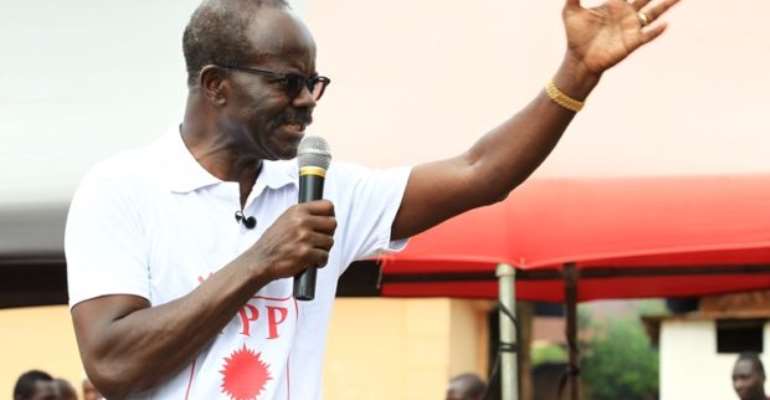 PRESIDENTIAL CANDIDATE of the Progressive People's Party (PPP), Dr Papa Kwesi Nduom, has asked the people of Sunyani in the Brong-Ahafo Region to disregard all promises being made by the National Democratic Congress (NDC) presidential candidate, John Dramani Mahama and Nana Akufo-Ado, leader of the New Patriotic Party (NPP).

He asked the people to vote for him to become president so that he could create jobs for them to have money in their pockets in order to live meaningful lives, claiming that he has examples to show that he creates jobs.

According to him, President Mahama cannot discharge his duties as a president noting that what he can do is what the people are seeing now –   hardship emanating from corruption in high offices, dumsor and joblessness. The PPP presidential candidate told Ghanaians that the promise by Mahama to create one million jobs when he is re-elected is a lie because he cannot do it. He wondered why the president couldn't do it during his years in office, charging the people to tell Mahama that he could not do the job and so they would give their mandate to him (Papa Nduom) to do it.

He said the recently commissioned Kommenda Sugar Factory has become a white elephant because there is no sugar cane to feed the factory. “This is a sign of incompetence,” he observed, and asked the people whether sugar is manufactured from pineapple or cashew.

According to him, a $35 million loan from India to revive the factory is a waste and a debt to pay.

Dr Nduom promised to create jobs in the agriculture sector where agribusiness will be the fulcrum that will turn the economy around, assuring that “there is money in agriculture and for that matter, in Ghana.”

He said when he wins the presidency, all foreigners who are engaged in galamsey and cashew business will be sacked to give way to Ghanaians to engage in meaningful business. He will also set up a gold refinery in the country so that foreigners will not cheat Ghanaians by taking the country's gold away, add value to it and resell it to Ghanaians.