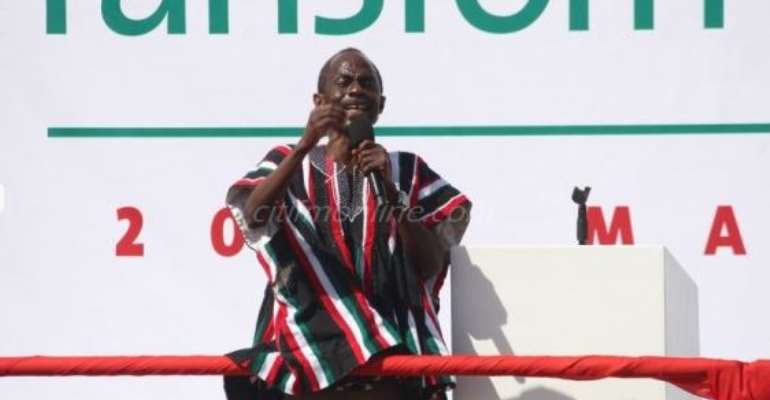 The General Secretary of the governing National Democratic Congress (NDC), Johnson Asiedu Nketia has been taunting the New Patriotic Party (NPP), asking the leadership to just rehash its 2012 manifesto and present it to Ghanaians.

Barely three months to the December 7 general elections the NPP is yet to present its manifesto to Ghanaian.

According Mr. Nketia the NPP delayed the release of its manifesto because it does not have clear and achievable ideas to present to Ghanaians.

“…So they [NPP] can present their 2012 manifesto if they don't have a new manifesto so that Ghanaians will assess them based on what they can offer. After all, they couldn't be in power so they did not have that opportunity to implement that 2012 manifesto.

Although the NPP has announced it will launch the manifesto on October 9, 2016, the NDC General Secretary said the long delay obviously means the party is just bereft of ideas.

“If they actually believe in what is contained in it [2012 manifesto] they can still recycle it and present it and we don't have any problem with them,” he on Thursday while addressing party supporters when he accompanied the Vice President,  Kwesi Amissah-Arthur to submit President Mahama's nomination forms to the Electoral Commission.

NPP manifesto launch moved to Trade Fair
The NPP which had delayed the manifesto launch following claims that the NDC would copy their ideas moved from the launch of the document from Tamale to Accra .

The party said the launch will now be held at the Trade Fair Center in Accra on October 9.

Hottest Photo Reports
Catch up with all the political quotes from our politicians.
Advertise here
More Headlines
ModernGhana Links
MMDCEs position useless — Kwame Asiedu Walker
ASEPA drags Shatta Wale to Police CID for faking gun attack
Police arrests Jesus Ahoufe over prophecy of Shatta Wale 'gun attack'
No government has mortgaged the future of the youth than NPP – Mahama
Ameen Sangari Factory will be revived Under 1D1F — Akufo-Addo
Military interventions in two of our member countries ‘backwardness’ – Bagbin to ECOWAS Parliament
I'm sorry, was running away from a prophecy that I'll be shot dead on October 18 – Shatta Wale
Police comb for Shatta Wale after reportedly shot
We Will Not Allow Anyone To Cheat Us In 2024 Elections — Mahama
TOP STORIES