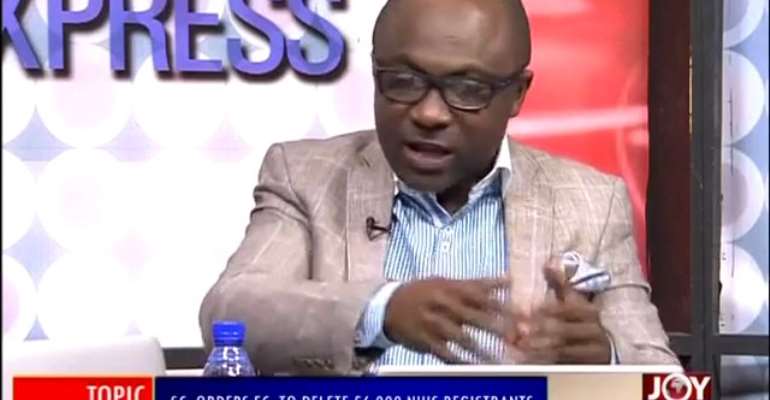 A legal practitioner and law lecturer has faulted the procedure adopted by the Commission on Human Rights and Administrative Justice (CHRAJ) to investigate allegations of corruption, bribery and conflict of interest against President John Mahama.

Yaw Oppong says the investigation processes was not thorough and suppressed the opportunity of both petitioners and the accused (the President) to cross-examine each other on the evidence presented.

“The procedure adopted for me was a bit casual. It is just CHRAJ asking questions of the persons they called and you see that, with the exception of Manasseh, all those they called [witnesses] are public officials,” he said.

He spoke on Multi TV’s news analysis programme, PM Express Wednesday that discussed the Commission’s findings of the allegations the President after he received a Ford Expedition gift from a Burkinabe Contract, Djibril Kanazoe.

The Petitioners, the Progressive People's Party (PPP) and the Youth League of the Convention People's Party (CPP) and a private citizen, Nana Addo Ofori, petitioned CHRAJ to look into the three alleged violations by the President.

The Petitioners grounded their request on an investigative story by Joy News’ Manasseh Azuri Awuni.

The report revealed how the Burkinabe contractor struck a friendly cord with the Presidency, gave a Ford gift to then Vice president John Mahama, now president and how the contractor was given three separate contracts by the government.

President Mahama admitted receiving the gift but said he handed it over to the state to be added to the pool of vehicles at the presidency.

He, however, rejects the allegations of bribery, corruption or a breach of the Procurement laws in the award of the three contracts to the Burkinabe contractor.

Speaking on PM Express, the law lecturer at the Central University College School of Law said the 78-page report released by CHRAJ on the matter suggests that the chance to put the sensitive matter to bed was missed.

“There is nowhere that it’s stated that the Petitioners were even asked questions by CHRAJ. In an allegation like this, as serious and sensitive as it can be, both parties must be given the opportunity to cross-examine each other. But it doesn’t appear that that was done,” Yaw Oppong laments.

CHRAJ stated, among other things, in the report that because the president declared the gift, surrendered it to the state's vehicle pool and did not use his public office for private benefit, President Mahama could not have been found to have breached the conflict of interest procedures.

Yaw Oppong finds CHRAJ’s analysis of conflict of interest allegation untenable, warning it could prove counter-productive when corrupt public officials cite same to protect themselves from a similar allegation.

“We shouldn’t place too much focus on conflict of interest because there were other issues that were raised, including corruption.

“It may also be too dangerous to say that when a gift is given to a public officer, and that public officer does not use it and the public officer gives it to somebody else and then justifies it on the basis that ‘I did not even use it. I put it in the disposal of the state’.

“If that is the proposition, then it must apply to each and every public officer because this same argument couldn’t have been made by the Judges [in the Anas’ Judicial Corruption scandal]” Mr Oppong told show host, Nana Ansah Kwao IV.

However, Mr Oppong’s co-panelist on the news analysis programme, Mr Kojoga Adawudu, who is a lawyer for the governing National Democratic Congress (NDC) said CHRAJ adopted a procedure stipulated by the Constitutional Instrument (CI).

“[CHRAJ said] they used their Constitutional Instrument 67, that is the investigation procedure. That CI states that they can subpoena people, invite them. That procedure may not have said they can put the people together and cross-examine them, as it is done in the Court,” Mr Adawudu defended.

Mr Adawudu
He said the Petitioners could have taken the matter to the Supreme Court, invoke Article 248 of the Constitution, and to demand that the Court declare that the President’s action constituted a conflict of interest.

He said in that instance, the Supreme Court could have allowed for cross-examination.