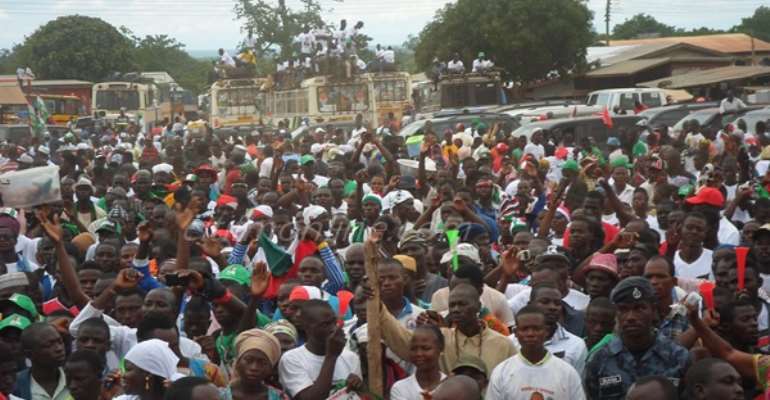 The Abura Asebu Kwamankese  constituency branch of the National Democratic Congress (NDC) has launched its campaign with a call on the foot-soldiers in the constituency to remain united.

Mr Sampson Ahiayo, Central Regional Secretary of the NDC who launched and inaugurated the campaign team called on the members and supporters to get involved in the campaign to ensure victory for President John Dramani Mahama and Dr Samuel Kweku Hayford, the NDC parliamentary candidate.

Introducing Dr Hayford who is making his first attempt, Mr Ahianyo said the NDC and President Mahama had done so much for the people of Abura Asdebu Kwamankese and the Region and therefore they should show appreciation by voting massively for him.

He urged the people not to allow themselves to be deceived by the lies of the New Patriotic Party (NPP) and vote for the NDC and President Mahama to continue to implement the good policies and programmes.

Dr Kweku Hayford appealed to the foot soldiers to exercise restraint even when they feel aggrieved and use the proper channels to address their concerns.

He urged them to do away with any backbiting and remain united to form a stronger team and work for victory adding: “Though we are sure of victory, we cannot be complacent.”

He assured the electorate that when voted to power, he would work hard in the interest of the people to bring development which had eluded them in the constituency.

He promised that when given the nod, he would ensure that the juice factory in the area which had collapsed would be revived and expanded to create jobs for the teaming unemployed youth.

Touching on the achievements of the NDC, he said President Mahama had laid a solid foundation for the development of the country and therefore deserved a second term.

Dr Hayford was confident and certain that the achievement of President Mahama in his first term would secure victory for the NDC in the December polls.

Follow the hashtag #GhElections on social media for election-related stories.