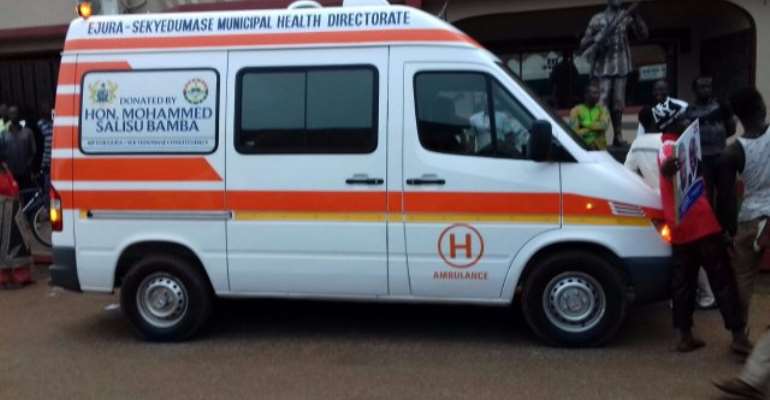 The Member of Parliament (MP) for Ejura-Sekyedumasi in the Ashanti Region has donated a brand new ambulance to the Ejura -Sekyedumasi Health Directorate.

Mohammed Salisu Bamba made the donation at a grand durbar of the second edition of the "Bra fie" festival of the chiefs and people of Sekyedumasi on Saturday.

Speaking at the durbar, the MP said he remains committed to his promise to stop pregnant women and sick people from being carried on motorbikes and other discomforting means to their referral centres.

Mr Salisu Bamba has also promised to upgrade the Sekyedumasi health centre to a full hospital when he and Nana Addo Dankwa Akuffo Addo emerge victorious in the upcoming elections.

After the presentation, the Omanhene of Sekyedumasi Traditional Council, who received the ambulance on behalf of the Health Directorate crowned the MP as "Oy3 ade3 yie" to wit a destiny changer.

Nana Antwi Bosiako I added that the ambulance comes as a big relief to the health centre since it will reduce the difficulties the health authorities encounter in referring patients to the referral centres.

The Omanhene said, although chiefs don't do open politics, he is urging all the people of Sekyedumasi and its surrounding to retain Mr Salisu Bamba as MP.