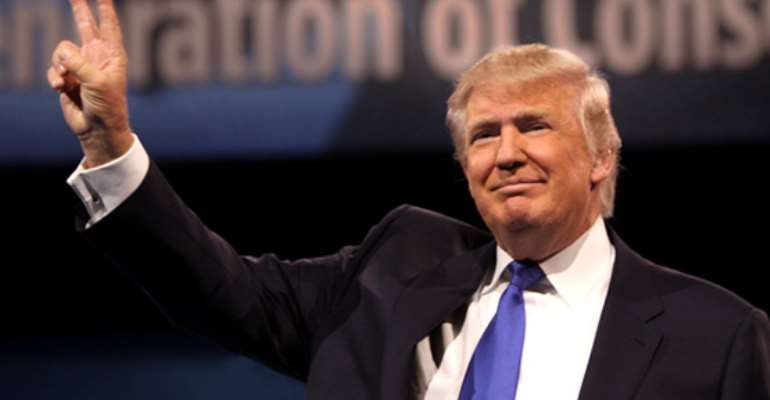 ---Gordon Offin-Amaniampong examines the political jigsaw: Or what the writer calls the ‘Trump Three-Tier-Trap.”

I get this question a lot. The latest was yesterday: “I hear people saying that experts predict Trump win. How likely is it, your opinion?” A political observer based in Accra, Ghana Mr. Kwamina Dadzie posed the question.

What do they say? When America sneezes the whole world catches cold.

That suggests, not only people here in the states that are worried about Mr. Trump’s presidency or want to know the outcome of the US presidential election, but even those who live beyond our borders.

Indeed it dates back last year September during the Republican primaries. At the time as a political beast I thought former Florida Governor Jebb Bush was going to be the Grand Old Party’s (GOP) nominee.

I got it wrong. My prediction failed. And one by one the controversial businessman now turned politician ‘pistol-whipped’ all the republican candidates that took part in the ‘gladiator’ politics---be them the Establishment, the Political Apprentices, the Conservative liberals, the Libertarians or the Tea Partiers--Mr. Trump trounced them all.

On the democratic side I betted on former secretary of state and First lady Hilary Clinton and I got it right. I anticipated a final matchup between her and Jebb Bush but as earlier pointed out it was a long shot. The rest is what we’re dealing with now…

It’s now the Clash of the Ignominious Two’ a title journalist Ike Idan Biney formerly of Ghana Broadcasting Corporation (GBC), said it would have been ‘more apt than what u opted for.’ He was making reference to the title- the ‘Clash of the Titans’ for the first 2016 presidential debate between Clinton and Trump, which came off on Monday September 26.

Fact is not many people gave Mr. Trump a dog chance from the onset. Not many people considered the business mogul as someone who’d or has the political mettle to jostle with the heavyweights. His celebrity status cast doubt about his ability to contest and debate the likes of Chris Christie, Kasich or neuro surgeon Ben Carson or Rand Paul.

Trump’s story reminds me of the birth of the Carpenter’s son in biblical Israel.

“Can anything good come from Nazareth?’

‘That question came from Nathaniel who would later become one of Jesus’ followers.

And the $99 billion-question is: Can he win the 2016 presidential poll?

It appears what he says is what the critical mass wants to hear. If his support is pivoted in the Republican base, I dare say that cannot move carry to the White House. In contrast if that Trump mania is rooted in the general populace then those experts’ predictions can pass.

Thing is the republican candidate has made some weirdest and most wacky statements since he began his bid to the White House. Trump’s campaign earth-moving remarks range from his decision to ban all Moslems from entering the US, accusing Mexicans of being rapists and criminals to calling blacks as lazy folks. But Trump is still here.

Not only that, he ridiculed the infirmity, attacked women in the media and corporate world plus he doubted or challenged the heroism of Arizona Senator John McCain. Still Trump is here!

Trump’s journey here has been fueled by what I describe as the ‘Three-Tier-Trap’.

The traps consist of Fear, Lies and his signature message---making America ‘Great Again’.

This philosophy mirrors McCarthyism which during the cold war period in the 1950’s then Republican U.S Senator from the state of Wisconsin Joseph Raymond “Joe” McCarthy made some subversive claims that oiled cold war tensions at the time. He averred that there were large numbers of communists, Soviet spies and sympathisers inside the United States.

Evidently, his failure to validate his claims caused him to be censured by the United States senate. Following that false claim similar anti-communist activities that reared their heads in the fifties were labeled McCarthyism---a term which was coined as a result of McCarthy’s unsubstantiated comment.

After his 1950 speech, Mr. McCarthy was reported to have made additional accusations of communist infiltration into certain state institutions, viz the state department, the administration of the President Harry S. Truman, the Voice of America, and United States Army.

Roughly a decade later, another republican candidate and a businessman, Barry Morris Goldwater, who was a five-term United States senator from the state of Arizona and nominee for president in the 1964 election, grabbed the headlines.

Mr. Goldwater is credited to have ignited the resurgence of the American conservative political movement in the 1960’s.

At the time the GOP had built what came to be known as the legacy of the New Deal. But the firebrand politician bulldozed his conservative ideology through--- sidestepping the New Deal Coalition. He managed to win then republican primaries per his ability to mobilise a large conservative constituency.

In the final analysis, Goldwater lost the 1964 presidential election to incumbent Democrat Lyndon B. Johnson by one of the largest landslides in America’s political history.

Does that remind you of Mr. Trump’s campaign style?

Americans like their leaders or presidents to be tough. Candidates that seem to have this character trait are more likely to be elected than their opponents who played the underdog role.

This was seen during the 1976 debate between incumbent Gerald Ford and then low-key Georgia Governor Jimmy Carter. Ford famously remarked: “There is no Soviet domination of Eastern Europe.” The moderator Max Frankel of the New York Times responded sceptically, “I’m sorry what? ...did I understand you to say, sir, that the Russians are not using Europe as their own sphere of influence in occupying most of the countries there and making sure with their troops that it’s a communist zone?’

Did Ford back down his statement? No, he doubled down. Perhaps he made it worse.

According the Times Mr. Ford refused to back down his original assertion insisting that ‘Poland, Romania and Yugoslavia are free from Soviet interference.”

That answer would become Ford’s nemesis and troubled him for the rest of the campaigns and arguably cost him the election.

Talking about toughness, Ronald Reagan possibly won his bid to the White House at the expense of then 51-year-old incumbent democratic Jimmy Carter. Reagan was seen by many as a tougher candidate compared to Carter.

Throughout the republican primaries and debates Mr. Trump made Immigration, ISIS, Iran, Iraq, China and Russia as his tramp card. He’s been strong critic of the NAFTA trade agreement which Mrs. Clinton is believed to have been a signatory.

And during one of the Republican primary debates the candidate was asked about how he would end the war on ISIS. Here is what he said: “I would just bomb those suckers. “ The way to go is to launch a bombing campaign on ISIS. According to him he would blow up the pipes. I’d blow up the refineries, every single inch there would be nothing left.”

Peddling lies
Alas ‘birtherism’ has gone to bed. This was one of the traps Trump employed to denigrate the presidency and the person of the 44th president of America—Barack Obama. Until recently following his tacit admission the GOP nominee had maintained that the president was born in Kenya, his father’s home country.

Also he lied during the first presidential debate about receiving endorsement from the ICE authority. That statement turned out to be false. Nobody at the department has ever endorsed him. Still Trump is here. He lied about meeting with Russian president Vladimir Putin that is also a lie. And the list goes on…

In spite of all that his support base has been growing significantly. After the GOP convention he’d a five-point lead over Clinton. But that lead was beclouded by nearly 16 points in national polls after the democratic convention in Pennsylvania last July.

Surprisingly, the chameleon has bounced back. Most polls across the nation showed the two are head to head. However, RealClearPolitics latest poll conducted on Wednesday September 28 put Clinton at 42-- four points lead over Trump’s 38.

Is Trump a Real Deal?
At the Trump Tower in New York City a big banner carried the slogan: “Make America Great Again.” This was Donald J. Trump when he announced his candidacy for president of the United States election for the 2016, on June 16, 2015.

Since then he has cast himself as an entrepreneur and one outside the establishment ---and that appear to be working. At least the numbers show for now and barring any serious political blunders in the few months ahead, many pundits would begin to rewrite their reports.

But I still maintain that Hillary would be the eventual winner. That I think has already started. One debate is down two more to go. Is not clear whether Trump will avail himself to mock exercises for the subsequent debates, which he earlier shunned. He blamed his poor performance at the last debate on his microphone.

Trump has also failed to win the establishment to his side and not being able to smoke peace pipe with Senator Ted Cruz, who he called the ‘Lying Ted.’

His arch rival Hillary had done the opposite. She’d successfully won Vermont Senator Bernie Sanders to her side. And the two campaigned together yesterday. This attempt is to win the hearts and minds of Sanders’ supporters. And it’s seen by many political strategists as a prudent idea. What probably count most in this election is for candidates making sure they stay focused, avoiding blunders and broadening base. The deciding votes are Independents, women and Immigration.